If he had any self-awareness at all, a CNN flunkie like Stelter would stay as far as humanly possible from any event dealing with ‘disinformation’. He’s a specialist in it, just in the wrong kind of way.

How can he be so thick not to know that, in a forum like that, he’d have a target on his back? The only explanation is that he’s so insulated from interacting with ANYONE who has a dissenting opinion that it never occurs to him that the public has caught on that we’re being lied to… certainly not in a university context. Not in a blue state like Chicago, right?

More accurately, we’re being systematically fed a pile of horsecrap that is engineered to perpetuate Democrat power socio-political structures and suppress Republican dissent.

See? Anyone can throw around the left’s $10 words. It’s not hard.

College freshmen Nicholas Fondacaro stepped up in the Q&A session and called Stelter out.

The panel had explicitly denounced FoxNews as a purvyor of misinformation, but how does CNN escape the same charge if they have a well-established history of getting the story very wrong?

He came prepared and cited a list of examples, too: Russian collusion; Jusse Smollett; rape allegations against Kavanaugh; Nick Sandmann; and the Hunter Biden laptop story.

Fondacaro goes on to ask whether, in an era where ‘mainstream corporate journalists’ are behaving as ‘apologists and cheerleaders for the regime’ … ‘is it time to finally declare that the canon of journalistic ethics is dead, or no longer operative’?

That last part was the question Stelter dared not address. So deflected and turned his attention elsewhere. Watch Stelter tell a bad joke before he tries to sidestep the actual point of the question.

Freshman Christopher Phillips CALLS OUT Brian Stelter and CNN for being a "purveyor of disinformation." He points to the Russian collusion hoax, Jussie Smollett, the smears of Justice Kavanaugh and Nick Sandmann, and their dismissal of Hunter Biden's laptop. pic.twitter.com/eHxqAWqVSC

Phillips tagged Stelter on Twitter and thanked him for taking the question but noted that the Eunuch Potato didn’t actually answer it.

He shines a spotlight on the key pattern of evidence demonstrating that the stories they get so very wrong are driven by political bias and not by ordinary human error:

thank you @brianstelter for taking my question and having a conversation with me afterwards, but i am STILL wondering: if CNN is truly unbiased, WHY is every mistake they make an overstep in favor of democrats and against republicans?? https://t.co/ofx0ghtrfD

Stelter wasn’t the only partisan sockpuppet on that panel. Two more are mentioned in this tweet. 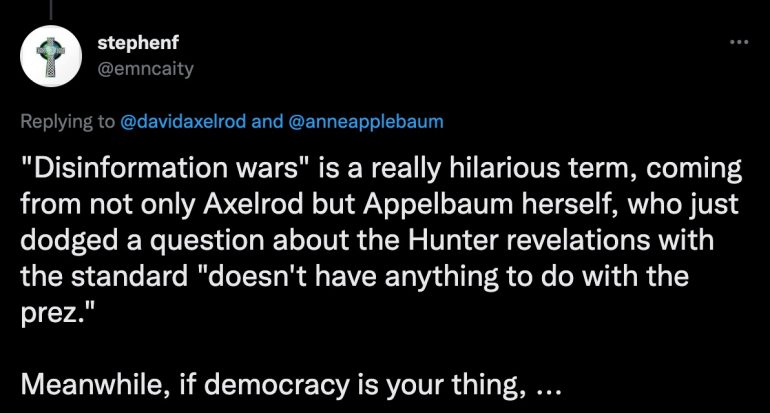 Yep. These are the ‘experts’ telling us that we’re being manipulated by the media.

We are… they’re just not being honest about who’s doing the manipulation.

For example, with Hillary For America being named by Durham as one of the groups whose documents have been subpoenaed in his criminal investigation, do you suppose anyone on that panel would discuss those facts impartially without spinning them to protect Hillary and discredit Durham or Trump?

That won’t stop them from lecturing us anyway.