Robby Mook tossed Hillary under the bus on Friday during his testimony in the Michael Sussman case.

Hillary Clinton’s former campaign manager testified in federal court on Friday that she personally approved the leaking of unverified ties between the Trump Organization and Russia’s Alfa Bank despite campaign officials not being “totally confident” that the covert communication channels discovered through opposition research existed.

Mook’s testimony followed former FBI General Counsel James Baker’s stint on the stand where he said that after the FBI investigated the allegations of the covert communications channel between Trump Organization and Russia’s Alfa Bank, the bureau concluded that “there was nothing there.”

NEW: @RobbyMook testifies @HillaryClinton herself approved the dissemination of info alleging a covert communications channel between the #Trump Organization & #Russia's #AlfaBank to the media, despite camp. officials not being "totally confident"in its legitimacy #SussmannTrial

The Alfa Bank claim was amplified in left-wing media, in particular by MSNBC host, Rachel Maddow.

Here she is insisting that the Trump-Alfa Bank connection is real, a mere 6 months ago.

It was also some of the disinformation posted by the erstwhile head of Biden’s “Disinformation Governance Board.”

BTW I quote tweeted the tweet of hers I did because it is her pinned tweet & has been since the day it was announced she’d been picked to lead DHS’s Disinfo Governance Board. The tweet is dismissive of any criticism of her and, of course, promotes her book she is trying to sell. pic.twitter.com/Z9uL6WZE57

Meanwhile, Mook admits that the campaign officials didn’t know if the connection was real, but pushed it anyway.

Mook said he was first briefed about the Alfa Bank issue by campaign general counsel Marc Elias, who at the time was a partner at lawfirm Perkins Coie.

Mook testified that he was told that the data had come from “people that had expertise in this sort of matter.”

Mook said the campaign was not totally confident in the legitimacy of the data, but had hoped to give the information to a reporter who could further “run it down” to determine if it was “accurate” or “substantive.”

“I discussed it with Hillary as well,” Mook said.

“I don’t remember the substance of the conversation, but notionally, the discussion was, hey, we have this and we want to share it with a reporter,” Mook said.

The government asked Mook if Clinton approved “the dissemination” of the data to the media.

Mook was asked about a specific tweet on Hillary’s account about the Trump org’s connection to Alfa Bank and the concept of an “October surprise” where dirt is leaked just before the election. The tweet in question was dated October 31, 2016. 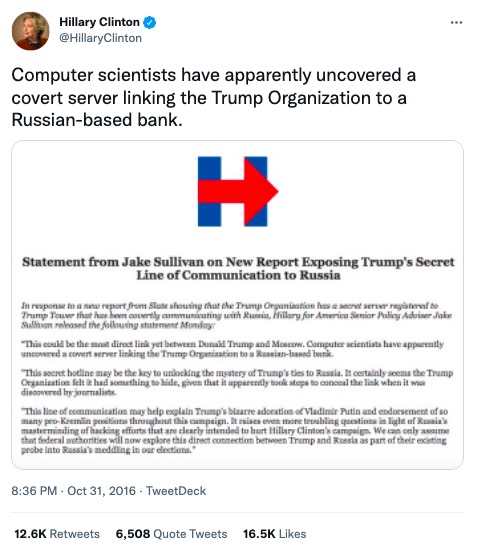 When pressed, Mook said he couldn’t recall “the exact sequence of events” on whether Clinton was giving final approval or if she was approving of something the campaign had already done.

“I recall it being a member of our press staff,” said Mook about how the Alfa Bank claim was leaked to reporters. “We authorized a staff member to share it with the media.”

Journalist Andrew Goudsward was live-tweeting during the Day 4 of the Sussman trial. Here’s part of his thread that covers Mook’s testimony.

Mook is up now. Says he never interacted with Sussmann during the campaign and was not aware of Fusion GPS before the election.

Mook says campaign didn't know about or authorize meeting with FBI. He says campaign wouldn't have wanted it for two reasons: (1) They wanted info public and didn't think FBI was a good one to achieve that (2) "We did not trust them."

On cross-examination, Mook says campaign wasn't fully confident in Alfa Bank allegations but decided to give it to a reporter in hopes they would "run it down" and verify it.

DeFilippis now showing Mook a Clinton tweet and statement from campaign policy adviser Jake Sullivan on Alfa Bank allegations after Slate reported on them in Oct. 2016. Sullivan statement says allegations could be "most direct link yet" between Trump and Moscow.

Major theme of DeFilippis cross is that Mook delegated work to Marc Elias and others, suggesting that Mook wouldn't necessarily have been aware of all the work to promote Alfa Bank allegations.

Mook says he "absolutely would have expected" to have been told or permission to be have been sought if campaign's lawyers went to FBI on Alfa Bank issue.

When the Left talks about wanting to stop the spread of disinformation — remind them that Hillary’s campaign pushed a fake story about Trump and Alfa Bank in October 2016 and the media ran with it.

And then in 2020, the entire media apparatus and their partners in social media did everything in their power to suppress the Hunter Biden laptop story — Twitter went so far as to block the link of the breaking story by the oldest newspaper in the country even in private messages.

These people are not qualified to define what “dis-, mis-, and mal-information” is because they’re peddlers of it.