It looks like people are voting with their feet when it comes to public schools.

One unexpected benefit of the pandemic is that parents finally saw how much the woke indoctrination in public schools has ramped up in recent years. Parents saw that children were being taught bizarre teachings on sex and gender as well as the neo-racism of “anti-racism” along with the alternative history of the “1619 Project.”

One school district in Tennessee had the gall to try to get parents to sign a waiver promising that they wouldn’t listen in on virtual classes. After a significant amount of pushback from parents who asked what the heck they were hiding, the district said that parents could help their children during virtual lessons but only with permission from the teacher. That’s still outrageous.

The Associated Press reported that schools all over the country are losing students and it’s resulting in cuts to their budgets.

A school system in suburban Kansas City is eliminating over 100 jobs, including kindergarten aides and library clerks. Oakland, California, is closing seven schools. Other districts around the country are merging classrooms, selling buildings and leaving teaching positions unfilled in order to close budget gaps.

Public school systems are beginning to feel the pinch from enrollment losses tied to the coronavirus pandemic.

Money for schools is driven partly by student headcounts, and emergency provisions in many states allowed schools to maintain funding at pre-pandemic levels. But like the billions of dollars of federal relief money that have helped schools weather the crisis, those measures were not meant to last forever.

So, where are those students going?

Families opting for homeschooling, private schools and other options sent enrollment down sharply in the first full school year of the pandemic, and generally it has been slow to recover.

In Houston, the largest district in Texas, enrollment tumbled by more than 22,000 to around 183,000 in fall 2021 and only about half of those students have returned. The district was shielded from making cuts in the first two years of the pandemic by what are known as “hold harmless” provisions, but those protections are expected to end. Superintendent Millard House has asked departments to cut $60 million from next year’s budget.

Other school districts the AP says are feeling the pinch:

But not everywhere is hurting for students.

Amid the upheaval, some states have gained students. Florida was among the leaders, according to the data-tracking site Burbio. And some districts’ headcounts benefited from new families, including some who moved to less costly areas as work went virtual.
Source: Associated Press (Emphasis added) 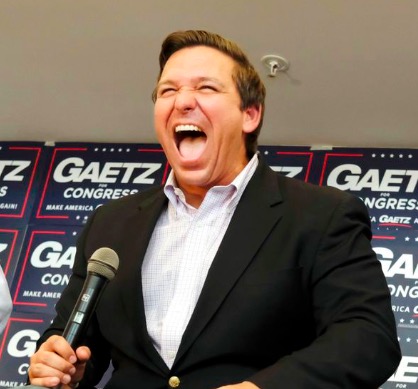 It looks like Florida’s commitment to parental rights in education is a pretty popular position. Now that the state has passed the Parents’ Bill of Rights, the Stop W.O.K.E. Act, and the much-maligned anti-grooming bill Parental Rights in Education Act that prevents instruction on sex and gender to students below Third Grade.

Families are making choices and that’s precisely the way that it should be. It doesn’t make sense that kids should be stuck in a terrible public school based on their zip code. Parents should be able to send their kids to the school that is the right fit for their child.

Charter schools, private schools, and homeschooling are all options that parents are giving closer examination now that they’ve seen that public schools are pushing extreme political and social views on kids rather than just teaching them literacy and numeracy.

But it isn’t just the curriculum — parents have also had it with entitled teachers’ unions that pushed for school closures that hurt children’s education and are gaslighting on CRT and gender theory in classrooms.

In the New York Post on Sunday, Karol Markowicz wrote a piece that makes it pretty clear that parents are tired of being treated like they’re stupid by teachers’ unions and school districts who continue to insist that the leftwing indoctrination isn’t actually happening when we know it is.

Markowicz, who recently moved to Florida in large part because of the way New York schools continue to handle the pandemic, cites the passage of the aforementioned Parental Rights in Education Bill that is popular even with Democrats in Florida.

But this actually isn’t a free-speech issue at all. Schools have always had set curricula, and teachers were not free to simply veer off into pet topics or ideologies. The growing movement comes from parents who think teachers and school administrations have strayed way too far from actual academics.

Opponents of these bills are caught in their own circular logic. If these topics aren’t taught in schools, then why are the bills even contentious?

Two weeks ago, Weingarten appeared on a podcast on which she said about the new laws: “This is propaganda. This is misinformation. This is the way in which wars start.”

The destruction of academics and the replacement of math, science and literature with woke theorizing on race and sex is worth fighting against, and parents shouldn’t shy away from it.

That’s a rallying cry to the new voting bloc of Frustrate Parents if ever I’ve seen one.

School choice is the civil rights issue of our time.

Corey DeAngelis has been tireless in his work pushing for school choice. It’s paying off.

all of the battles we’ve seen over the past two years are symptoms of the larger problem: a one-size-fits-all government school system.

the only way forward is to fund students instead of systems.

DeAngelis is not wrong. Neither is Karol Markowicz.

This is a war for your kids.