A veteran-organized motorcycle ride was misconstrued in Canada’s Capital over the weekend and the result was a hate crime.

Bikers from across the country came to the Nation’s Capital on Friday to “reconsecrate” the National War Memorial in downtown Ottawa that they say was “desecrated” by Ottawa and Canadian authorities during the Trucker’s Freedom Convoy. Authorities erected a fence around the memorial and the Tomb of the Unknown Soldier preventing access to the public. Many veterans found this reaction to the truckers’ protest particularly disrespectful.

The Canadian Media have painted “Rolling Thunder Canada”, (which was inspired by the U.S. Rolling Thunder ride into D.C. to honor veterans,) as a Freedom Convoy 2.0 protest and it was not intended to be anything of the sort.

While some were trucker protesters returning to Ottawa and many Canadians did show up with flags and shouted about “freedom” from the ongoing COVID travel restrictions on unvaccinated Canadians and general authoritarianism under the Trudeau regime, the organizer of the rally said the ride was not meant as a protest but was meant to show support for veterans and reclaim the monument.

Neil Sheard, the veteran who organized said in an interview that it isn’t about a protest at all.

It’s all about the monument. It’s not a protest. Because when the powers that be decided to put a big monster fence around our monument, that’s ours. That’s a veterans monument. That’s our that takes receipts for all the people that died from the Boer War to off to Afghanistan that takes receipts.

The turnout was amazing.

People take to the streets for the #RollingThunder protest rally for freedom.
pic.twitter.com/IYlf4YuLHN

The city of Ottawa was prepared to crack down as soon as the bikers rolled into town.

Here is Mayor Jim Watson talking about how they had “all hands on deck” to ticket and tow bikers and spreading lies about the truckers protest smearing it as a hotbed of racism and bigotry… which was not the case at all.

Ottawa Mayor says the city, RCMP and police are ready for the upcoming convoy:

"all hands on deck" to enforce a "zero-tolerance policy" to ticket and tow protesters.

Asks them not to provoke: "racist, sexist, homophobic non-sense"

The Mayor wasn’t the only one triggered.

Tens of other Ottawa residents weren’t too pleased. They decided to host an “Unwelcome Party” but it appears that very few people were invited despite fairly heavy local coverage.

Perhaps the return of the geese this spring triggered their PTSD and they’re suffering again from the “phantom honking”.

A counter protest to the ‘Rolling Thunder’ convoy has gathered at Strathcona Park in Ottawa. The group is holding signs that say “Go Home” and “Ottawa says NO to convoy hate.” #RollingThunderOttawa #ottawa #ottnews @ctvottawa pic.twitter.com/BmxenifYbR

It was a delight to watch this lone woman become completely unhinged on camera. She has no idea what the protest is about or what she’s counter-protesting.

Do yourself a favor and watch two minutes of our David Menzies talking to a pro-Trudeau counterprotester in Ottawa today. pic.twitter.com/BvwcTlVisT

It’s now after 11 pm & I’m trying to get some sleep. But all I can hear resonating in my brain is, “NO MORE COMMENTS; NO MORE COMMENTS” in a tone that resembles a banshee caught in a leg-hold trap. Still trying to decipher the nuance in her words. The sound of silence: priceless. https://t.co/5WzlAe1lh4

Bikers were welcomed with fines, tickets, and a few towed vehicles.

Enforcement action since 7 AM Friday in regard to the demonstrations in #OttCity:

Welcome to Ottawa, where peaceful protest is greeted with heavy-handed police action!

Canadian reporter Lorrie Goldstein took a jab at the police on Twitter saying that it couldn’t possibly be true because clearly, you need to invoke the equivalent of Martial Law in order to tow vehicles in Ottawa.

Fake news since, as we all know, vehicles cannot be towed in Ottawa unless Prime Minister Justin Trudeau invokes the Emergencies Act:
Ottawa police say they made 7 arrests & towed 24 vehicles on first day of the Rolling Thunder motorcycle rally in Ottawa.https://t.co/DMKbOd97b5

A church near downtown Ottawa was vandalized overnight on Saturday with thumbtacks tossed on the property’s driveway and small parking lot.

The building is the home of Capital City Biker’s Church and the last scheduled event for Rolling Thunder was a Sunday morning worship service.

Worshippers arrived at the church to see “No haven for fascism” spraypainted on the front of the brick building. 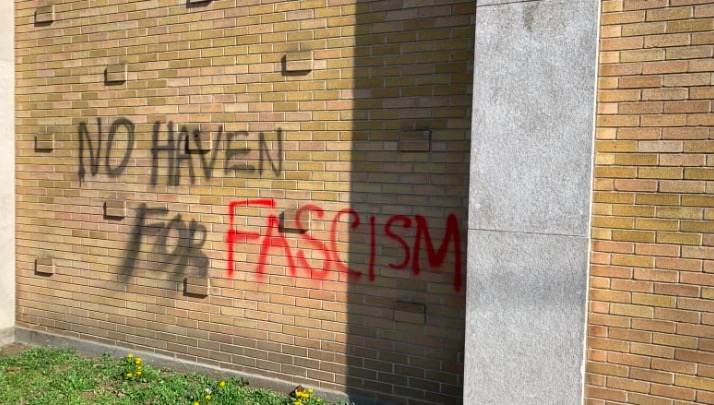 Police are investigating an incident of hate-motivated Mischief at a religious institution located in the 100 block of Carillon Street that was reported to us just before 7am this morning. The Hate and Bias Crime Unit investigation is ongoing. Info? 613-236-1222 #ottawa #ottnews pic.twitter.com/GPYeCNFyd3

Mischief, eh? Isn’t that what the Freedom Convoy organizers were kept in solitary confinement for “counselling” people to do? Let’s see if they hold these vandals that actually damaged property to the same standard. (Somehow, I doubt it.)

Church members cleaning up the tacks left on the ground. pic.twitter.com/ETYbUwLuxj

Bikers and Rolling Thunder protesters arrive at the church that was defaced by people against the group in Ottawa. pic.twitter.com/y4eYXTJQ9D

Hundreds of people packed an Ottawa church on Sunday morning to mark the final schedule event of the weekend-long “Rolling Thunder” protest as police launched an investigation into vandalism that allegedly took place ahead of the gathering.

Bikers, “Rolling Thunder” rally supporters and other worshippers arrived at the Capital City Bikers’ Church to find its brick exterior had been vandalized with spray-painted messages including “fascists” and “no haven for fascism.”

The Ottawa Police Service confirmed its hate crime unit is investigating “an incident of hate-motivated Mischief at a religious institution” on on Carillon Street, the same one where the church is located.

But the incident did little to suppress the spirits of the enthusiastic, peaceful crowd.

A four-piece band belted out soulful Christian rock songs while hundreds of worshipers waved their arms in the air.
Source: Ottawa Sun

While some Ottawans were worried about an “occupation” the bikers left with no trouble on Sunday.

Kinda makes all those “Rolling Thunder” counter-protesters look like complete idiots, doesn’t it?

Oh, by the way, the Rolling Thunder protest didn’t raise any money for itself, but once they heard about a cycling fundraiser for the Children’s hospital in Ottawa, they encouraged visitors to their site to donate to that by providing information on the fundraiser and a donate button.

This is how we win.