It’s one thing to sit in your basement and spout off about how bad the other guy is. It’s quite another to step up and do the job yourself. That’s a lesson Joe Biden is learning the hard way.

As much as Trump gets dragged by the media, being 45’s successor is a tough gig. The left doesn’t like to talk about them, but Trump had some significant accomplishments. Not the least of them was his work with North Korea. 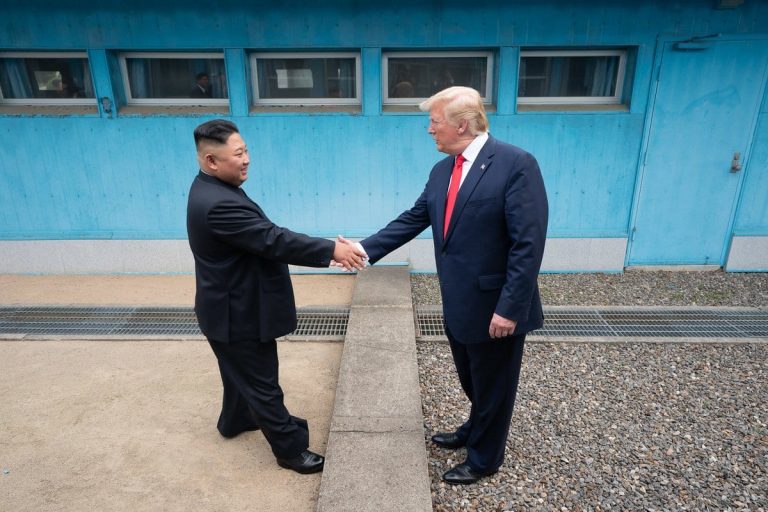 Sure, Trump’s efforts to normalize relations completely hit a dead end. But Trump did something others never thought possible — he opened dialogue, oversaw the return of Otto Warmbeir to America, and the repatriation of the remains of several fallen American servicemen.

We saw that iconic moment where Trump stepped across that demilitarized zone and shook ‘Little Rocket Man’s’ hand.

More importantly, we saw a window of time in 45’s presidency where North Korea stopped threatening its neighbors with missile strikes.

Biden is visiting South Korea. Will he, like Trump, cross that DMZ step into North Korean territory? Of course not.

For all his tough talk, it’s pretty obvious that Biden is a paper tiger — all talk and no action. There’s no way he’ll measure up to the bar that Trump set. But what about that lesser bar set by other Presidents visiting South Korea before him? Will he at least pay a token visit to the border to take the obligatory look at North Korea through binoculars?

Nope. Mr. Tough Guy won’t be doing that either.

He’s too busy doing photo ops and speaking tours. How well have those been going? Going by the fact that he’s called himself a ‘gaffe machine’, pretty much as expected.

So far, he has a couple of doozies. The most brutal one was where he called the current leader of South Korea by his predecessor’s name (it would be hilarious if the South Korean leader returned the favor).

The other doozy was when he was bragging about Samsung’s investment in American operations and botched the name of the community in Texas where those operations are set to expand.

President Joe Biden kicked off his trip to Asia by meeting South Korea’s new President Yoon Seok-youl in the lobby of a Samsung micro-chip facility Friday evening and taking a factory tour.

…Biden thanked President Yoon, although he stumbled over his name after getting it right the first time after a long flight.

Biden also misstated the name of the facility in Taylor, Texas, where Samsung plans to spend billions. He called it Tyler, Texas. —DailyMail

Ladies and Gentlemen, the ‘leader of the Free World’.