After 6 years of calling Donald J. Trump a “unique threat” to America, the journos are finding some “strange new respect” for him as GOP voters are cheering on Florida Governor Ron DeSantis.

If you’re not aware of what the “strange new respect” trope is, here’s a quick’n’dirty primer. The idea was introduced by Tom Bethell in the American Spectator in 1992 to mock the practice of Lib Journos who would heap praise on conservative politicians who shifted their positions from right to left by saying that they were commanding “strange new respect” in Washington.

It has now evolved into just painting the current Republican as an “existential threat to democracy” and therefore far worse than the last Republican.

The “strange new respect” phenomenon generally begins in the next election cycle when the Republican is no longer a threat.

When Trump was in office, the Democrat politicians and Lib Journos lamented that he wasn’t the statesman and patriot that George W. Bush was — even though when Dubbya was in office, he was called “BushHitler” and labeled a stupid puppet of the Evil Dick Cheney, father of Rep. Liz Cheney who now commands the “strange new respect” because of her NeverTrumpism and role in the Jan. 6 show-trial.

As Ron DeSantis continues to rack up conservative wins in Florida and buzz is growing on the right for a possible 2024 run, it’s clearly time for Democrats and their sycophants in the Regime Media to start The Smear™.

They’re going with “Ron DeSantis is a fascist.” No, really.

Take it from that spectacular 2004 presidential failure, Mr. Scream himself, Howard Dean.

So, Dems are seriously going with painting the guy that took heat for pushing back on lockdowns, refusing to close schools, businesses, and the beaches in March 2020, admitting that the masks don’t work, and that parents shouldn’t be concerned that schools and Disney will be pushing radical race and gender ideology on their children is the fascist.

Meanwhile, the evidence shows that red states are winning in post-pandemic economic recovery when compared to blue states.

If Virginia’s recent gubernatorial race is any indication, the new voting bloc of Concerned Parents really appreciate that they are being heard and having their problems with education addressed by GOP politicians.

While it’s just absurd on its face, the Trump Derangement Syndrome™ sufferers are glomming onto the new talking point and spreading it like the proper anti-GOP evangelists that they have become. 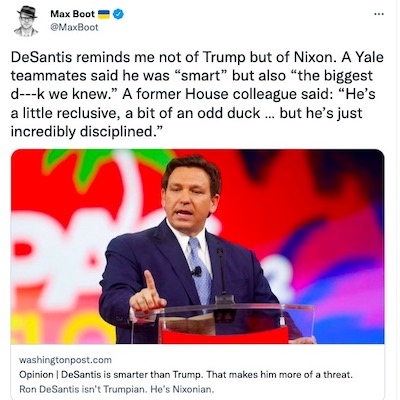 Many, many right-wingers said that all of this is so very, very predictable.

BTW, when I say “predictable,” I mean I predicted this literally the day Biden entered office. pic.twitter.com/yQ31Wf9aXU

And we’re starting up that Ackshually Every Republican is Worse Than Trump Please Forget Everything We Said About a Unique Threat for Six Years train. https://t.co/8AIub3IfJu

To people like Boot there are only two types of Republicans:

The Max Boot take is just spectacular because he’s calling DeSantis “Nixonian” which is so much worse than “Trumpian”… except, Boot had said in 2017 that comparing Trump to Nixon wasn’t fair to Nixon.

What an absolute fuck. pic.twitter.com/YXWp5KiQlr

The hot takes just kept coming from the Lincoln Project. You know, that bastion of “conservatism” that (allegedly) turned a blind eye to the groomer behavior of one of their founding members and orchestrated that stupid tiki torch stunt at a Glenn Younkin event in Charlottesville on behalf of Terry MacAuliffe.

Chris Rufo posted the perfect bait tweet to snag the NeverTrump (former) Republicans and he reeled in a helluva catch.

The test for “NeverTrump” intellecuals is where they stand on DeSantis. He should be their guy: elite education, military background, leadership experience, impeccable character. If they can’t get behind him, the takeaway is clear: it’s not about principles; they serve the Left.

The QTs are in: the opinions of Max Boot, Joe Walsh, and Lincoln Project co-founder Reed Galen are virtually indistinguishable from those of New York Magazine’s resident lunatic Jonathan Chait. It might have been about principles in the beginning, but now it’s pure grift. pic.twitter.com/MEy7whhbYg

DeSantis has always been a bigger threat than Trump. You may now begin your Two Minutes Hate. pic.twitter.com/I1gbW9rJsY

Democrats have a plan, however…

Meanwhile, the Dems are going to run Newsome as their freedom loving POTUS candidate

They’re mulling over running Governor Lockdown against Governor Freedom in 2024.

It’s important to recognize this tactic of “Strange New Respect” for what it is — nothing more than partisan gamesmanship that the Regime Media is complicit in.