Speaking truth to power may be a trite slogan in the West but a Fatwa taught Rushdie the hard way that not every ‘power’ has the same response to someone ‘speaking truth’ to it.

Salman Rushdie was living under a threat on his life after writing a novel in 1988. Muslim readers took offense to his fictional story, calling it heretical. Iran’s Ayatolla issued a Fatwa on his life in response. The current leader upheld that fatwa as still valid not long before the COVID shutdowns.

Today, Rushdie was being introduced for a speaking engagement when someone attacked him with a knife. The police report describes it this way. 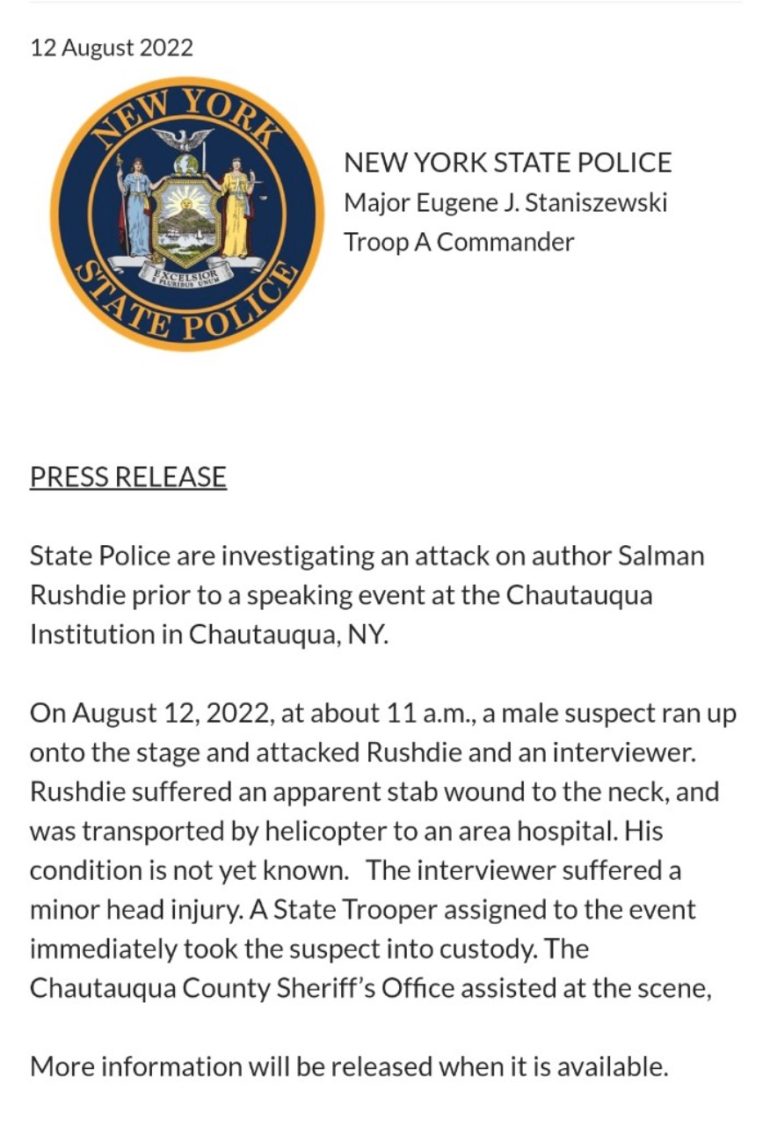 Here’s a 5-second glimpse of what the audience saw.

NOW – Salman Rushdie is stabbed on stage in New York.pic.twitter.com/qFmYE6BC5E

Here is footage of Rushdie being hurried to the air ambulance helicopter.

There has been a Sword of Damocles hanging over Salman Rushdie’s head ever since he wrote an infamous novel The Satanic Verses in which his fanciful modernized plot directly lifted from many aspects of Muhammed’s life, which devout (obviously) found heretical.

More to the point, as the name of his novel implies, he incorporated elements of his Mohommad character briefly embracing polytheism. This was a direct reference to what Muslim scholars call ‘The Story of the Cranes’, in which Muhammed validated the Meccan pagan gods. Clearly, such pagan worship was later rejected my their prophet.

The Satanic Verses refer to an event in Muhammad’s life which Muslim scholars call The Story of the Cranes. It is a time when Muhammad recited, as part of the Qur’an, that the polytheistic gods of Mecca were valid. Some time after saying this he withdrew these verses from the Qur’an and said they were inspired by Satan.

For years afterward, Rushdie was forced to live under the protection of armed guards and under an assumed name, moving from place to place. His story was where many in the West first learned the word Fatwa, and that at least one application of the word had explicily violent implications.

While we don’t yet know if this attack was related, we have seen other occasions where Western incidences of being ‘offensively heretical’ have resulted in violent outbursts from offended Muslims.

Remember the Mohammad Cartoon? People were attacked and embassies were trashed over that one.

More recently, we saw the murder of filmmaker Theo van Gogh had been prompted by a Fatwa.

This attack comes at a time when we know that Iran has been actively seeking to murder other people on American Soil, specifically Pompeo and Bolton.

We are told by AG Garland and Director Wray that the real threat in America stems from right-wing domestic extremists rallying around patriotic symbols.

If so, why are we seeing so many attacks against Salman Rushdie, Lee Zeldin, ‘Rightwing’ SCOTUS appointees, churches, and pro-life institutions… and why do Garland And Wray have so little to say about them?