It’s kind of amazing that this clip is still up.

Alex Jones is quite the character. He’s the host of Infowars, sells supplements, and built an alternative media empire even though he’s been banned from Facebook, Twitter, YouTube, Spotify, and probably a bunch of other sites. He’s said some pretty crazy things over the years. Yet, even though he’s spun some pretty wild yarns — sometimes he’s right like his famous line, “I don’t like ’em putting chemicals in the water that turn the friggin’ frogs gay!” Inelegantly stated, perhaps, but not altogether inaccurate.

The reason that he’s been making headlines lately was not because of one of those times.

Jones is being sued for defamation by the parents of Sandy Hook victims. On his popular show, Jones repeatedly claimed that the 2012 school shooting in which 20 children and 6 adults were murdered was a hoax perpetrated by the government in order to take guns away from Americans. The plaintiffs are seeking $150 million in damages.

On Thursday, the jury came back with a verdict that Jones was to fork over $4.1 million in damages to the family of a first-grader that died in the massacre. Then, on Friday, Jones was ordered to pay $45.2 million to the parents of another of the victims. That’s $49.3 million in damages with two more trials to go.

Attorneys for the parents made it clear that the tens of millions in damages are meant to silence Jones permanently.

An attorney for parents Scarlett Lewis and Neil Helsin had asked the panel to deliver a verdict big enough to “take the bullhorn away” from Jones, NBC News reported.

“I ask that with your verdict, you not only take Alex Jones’ platform that he talks about away. I ask that you make sure that he can’t rebuild the platform. That’s what matters,” lawyer Wesley Ball said. “That is punishment, that is deterrence.”
Source: New York Post

Jones may not actually have to shell out the tens of millions because Texas has a cap on damages.

…Texas law caps punitive (“exemplary”) damages at twice the compensatory damage award plus $750,000. Moreover, an exemplary damage award requires an unanimous jury, and only ten of the twelve jurors agreed on the original $4.1 million compensatory award. And if the jury’s original award was for non-economic damages, i.e. to compensate them for pain and suffering, then they may only get the $750,000 in this phase of the trial. Which is perhaps why plaintiffs’ counsel tried to “anchor” the jury at $150 million in the first place.

But Texas law prohibits telling the jury about the cap, so it may well return a massive verdict which will then be reduced to comply with the statute — sending a signal about Jones’s moral culpability, but allowing him to walk away with a slap on the wrist in light of the company’s annual revenues in the neighborhood of $65 million.
Source: Above The Law

There’s much debate on the justness of all of this in a country with a First Amendment that guarantees freedom of speech, including offensive and odious speech, but that’s not the focus of this article.

Attorneys in the court have been calling into question things Jones has said on his show in order to discredit him as a conspiracy theorist.

A clip of one of these incidents was memed and went viral for obvious reasons.

Whatever you think of Alex Jones — that moment is simply incredible. 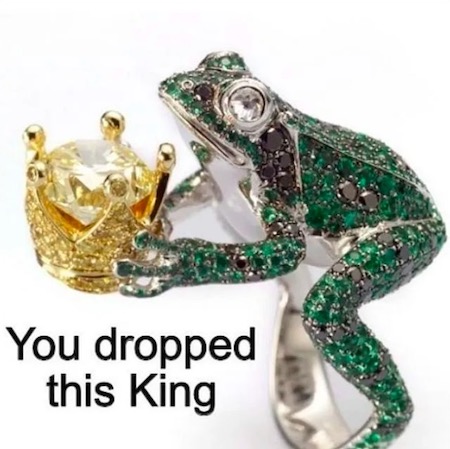 Adding in the clip of Joe Rogan was perfection since Spotify has desperately tried to censor the times Jones has been on the Joe Rogan Experience.

After the video racked up millions of views, the meme maker decided to post a statement so that he isn’t banned by the Twitter Censors.

Every time you watch it, it just gets better.