Sure, Joe Biden signs the EOs and reads the teleprompter for speeches, but is he really calling the shots in this presidency? Or is he more like Wilson was after his stroke, a President in Name Only?

Even Joe acknowledges he’s a ‘gaffe machine’. But there’s a world of difference between making a public gaffe and being publicly contradicted on important issues of policy.

Think of the presidents from Carter through Trump. Each of them made decisions that drove the other side absolutely crazy. Each might have been subject to questions about which advisor was putting ideas into their heads.

But nobody really doubted that the final decisions were made by the guy who had been elected to office. Biden is a different story.

Not only is Joe’s mental state the subject of either discussion or outright mockery both domestically and internationally, but he has frequently had his own public policy statements walked back by officials whose job, in principle, is putting the President’s executive decisions into action.

Not only did he make his Taiwan gaffe for what’s being described as the 4th time, but he made a pandemic claim that was walked back immediately by his own White House. 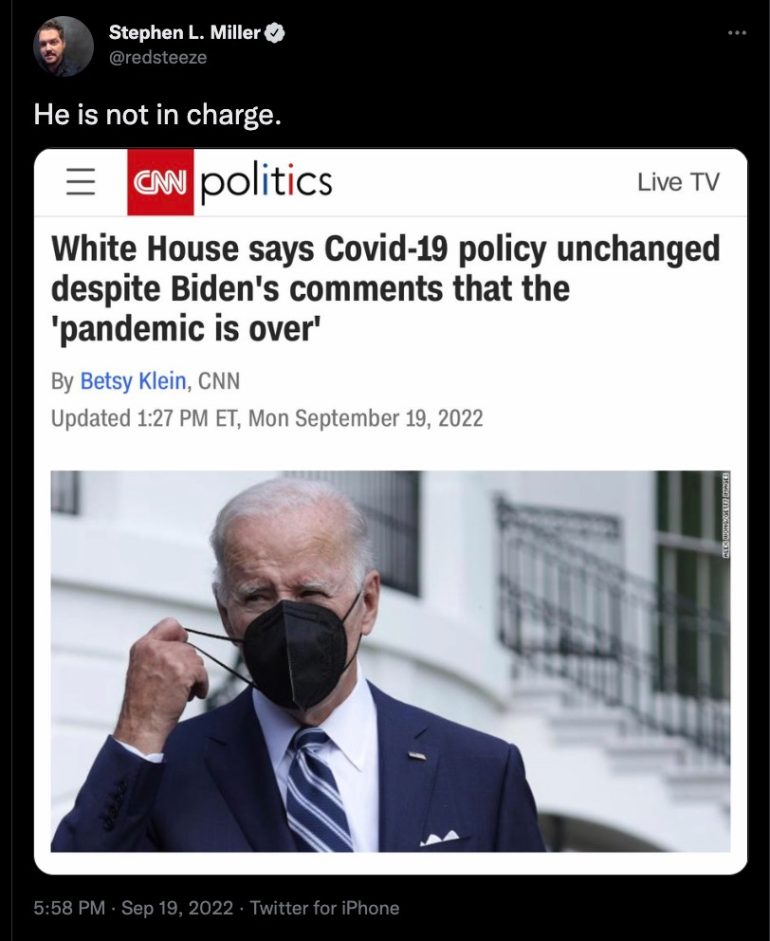 This announcement has exposed two different agendas that have come into conflict.

Joe Biden is desperate for wins, and one of the Big Promises he made was that he would shut down the virus, not the economy.

He’s had the media throwing everything they’ve got into polishing the turd that is Biden’s economy, even if they have to rewrite the dictionary to do so. Knowing they will back up his lies, Biden will brag about his amazing economy all the way through to the midterm elections.

The pandemic on the other hand, has lingered like a bad smell, racking up some 641,000 American COVID deaths since Biden took office. (As compared to ‘only’ 396,000 under Trump, despite the vaccine and various treatment options not even coming online until after the November election.)

Leaving aside Joe’s taunt that Trump should ‘resign’ for having 200,000 Covid deaths under his watch being a sharp indictment of his own leadership failures, (worse still if you consider the skyrocketing deaths associated with Fentanyl poisoning and violent crime), there is a fork in the road for the Biden administration.

He’s got a decision to make: end the pandemic, or keep it going?

On one hand, Joe Biden wants to tell the world he has delivered on his promise of having beaten the virus… just in time for the Midterm Elections. How convenient.

Unfortunately, there are no stats that would back any sudden announcement to having ‘beaten it’. If it’s ‘beaten’ now, why was it NOT ‘beaten’ back in May? What changed, besides the politics?

Looking at this COVID graph from the USAfacts site, the COVID numbers are dipping, but they’ve been lower than this before, more than once, in fact.

And the most current numbers suggest more than 300 people still dying every week.

Just below that graph was another quote:

The Surgeon General lays out a case even worse than those numbers, saying we’re losing 400 people a day:

"Surgeon General" @vivek_murthy contradicts Biden, says the pandemic is not over: "We’re losing about 400 people a day on average to this virus. We need to get that number lower. We have people who are struggling with long Covid." pic.twitter.com/VJY6PbcxjX

If Trump had called numbers like that a ‘victory’ the press would have eaten him alive over his callous indifference to human life.

Even MSNBC is pushing back on this one… 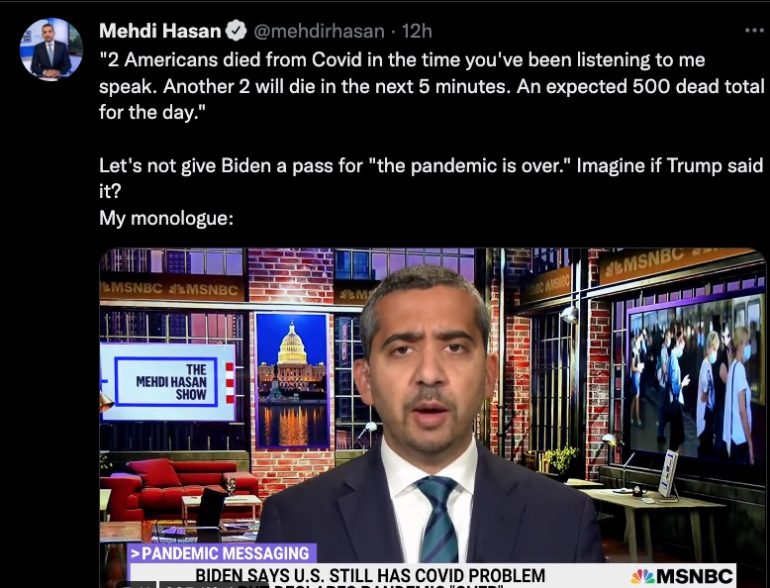 But ‘I shut down the virus’ is not the only game in play here. There is another agenda to be considered. It involves policies that hinge on keeping the pandemic going.

Or not to end…

As recently as August, Politico was sharing this juicy news story, one ALSO timed in a way every bit as cynically convenient for the incumbent party as artificially lowering the price of oil by selling off our strategic reserve until AFTER the midterms.

The Biden administration is expected to extend the Covid-19 public health emergency once again, ensuring that federal measures expanding access to health coverage, vaccines and treatments remain in place beyond the midterm elections, three people with knowledge of the matter told POLITICO.
…Under the proposed extension, the Department of Health and Human Services would continue the declaration beyond the November elections and potentially into early 2023 — pushing the U.S. into its fourth calendar year under a Covid public health emergency.
…The emergency designation has also provided authorities that allowed the administration to expand access to Medicaid, greenlight vaccines more quickly and offer tests and therapeutics for free. Were the emergency to be ended, those flexibilities would need to be unwound — a complex process that hospital and public health groups have warned could be disruptive to their ability to treat Covid patients.
The federal government has continuously renewed the declaration since the first Covid cases hit the U.S. in January 2020. And while HHS has pledged to give states 60 days’ notice before allowing it to expire, the administration has refused to set out specific criteria for phasing out its emergency authorities.
The debate around continuing the declaration, however, has grown more contentious. With vaccines and treatments widely distributed and no remaining expectation the administration can eradicate Covid, health officials over the last several months have increasingly discussed when that phase-out should occur, and what it should look like. –Politico

Medicaid isn’t the only thing contingent on the Pandemic Emergency status. Joe having the excuse of an ’emergency’ to push heavy-handed policies has been a useful way to achieve agenda items that would otherwise have had to originate as lowly Congressional bills requiring such tiresome steps as open debate by elected representatives.

But with a ready excuse like an ’emergency’ at his fingertips, he can make student debt ‘vanish’ with the flick of his pen without any of that hassle.

The Blaze explained that the student debt forgiveness relied specificially on the rational of a national emergency. 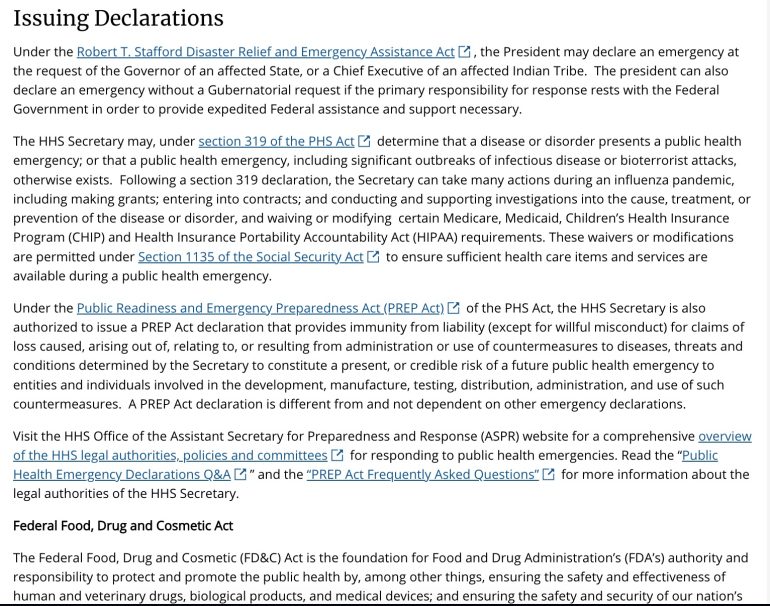 Not the least of those was the ‘Emergency Use’ clause that gave the FDA such lattitude to make Big Pharma money hand over fist these past two years and to sheild them lawsuits.

Not to worry, they remember who their friends are.

TheNationalPulse for instance, broke a story about a conferenece Pfizer is having in D.C. Look who they invited!