What the activists were hoping for was someone to push their agenda. What they got — instead — was someone who helped expose what they were up to.

Once you see what lawyer Preston Moore was asked to say about Trump, it’s hard not to see how perfectly those themes dovetail with Joe Biden’s new tactics of destroy-Trump-and-his-supporters inflammatory rhetoric.

The channel that was approached was @trialbypreston, a TikTok channel focused on legal issues.

There’s no question these activists and Joe Biden have singing from the same song sheet. They are trying to put a particular idea about MAGA voters in the public consciousness.

The unanswered question is, who is really in charge here?

What was the anti-Trump propaganda, exactly?

Let’s take a look at the video, so we can unpack what’s in it.

“I was just offered $400 to make an anti Trump video” pic.twitter.com/FhinA9nY4p

What we’ve got is a lawyer with a social media following large enough that it caught the notice of activists trying to get a message out. The message was an anti-Trump message with a J6 theme and a very particular agenda.

He was to get $400 dollars in exchange for a one-off propaganda post denouncing Trump and making use of a very curious combination of keywords.

Without duplicating the entire video 2-minute video, let’s skip ahead to part about the key words he was asked to repeat: 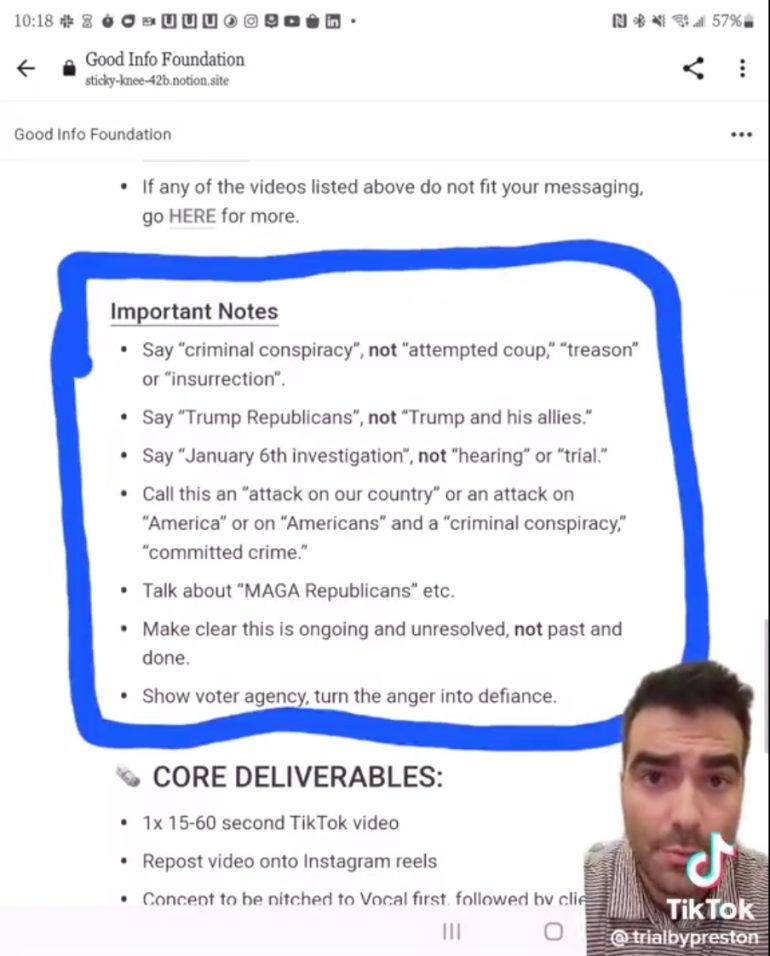 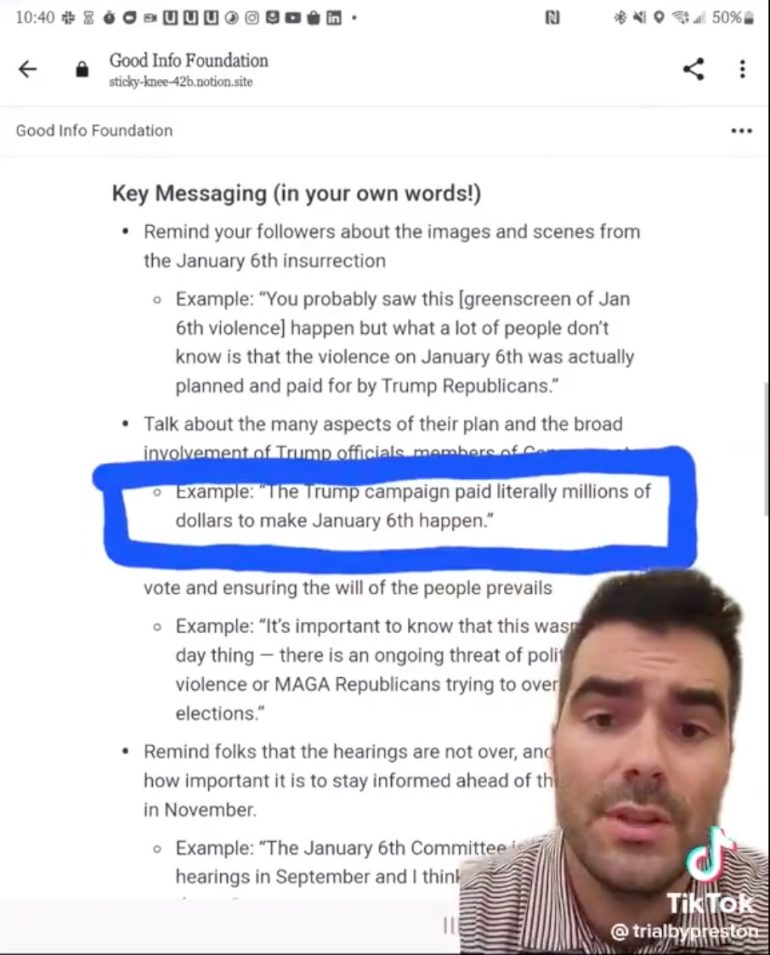 Important Notes:
– Say ‘criminal conspiracy’, not ‘attempted coup’, ‘treason’ or ‘insurrection’.
– Say ‘Trump Republicans’, not ‘Trump and his allies’.
– Say ‘January 6th Investigation’ not ‘hearing’ or ‘trial’
– call this an ‘attack on our country’ or an attack on ‘America’ or on ‘Americans’ and a ‘criminal conspiracy’, ‘committed crime’
– talk about ‘MAGA Republicans’ etc
– Make clear this is ongoing and unresolved not past and done
– Show voter agency, turn the anger into defiance

Key Messaging (in your own words!)
– remind your followers about the images and scenes from the January 6th insurrection
— example: ‘You probably saw this [greenscreen of Jan 6th violence] happen but what a lot of people don’t know is that the violence on Jan 6th was actually planned and paid for by Trump Republicans

– Talk about the many aspects of their plan and the broad involvement of Trump officials members [obscured]
— Example: ‘the Trump Campaign paid literally millions of dollars to make January 6th happen’

-[obscured]… vote and ensuring the will of the people prevails
— Example: ‘It’s important to know this wasn’t a one-day thing — there’s an ongoing threat of political violence or MAGA Rupublicans trying to overturn elections.

Preston asked the person who reached out to him for more information about the claim that Trump paid ‘literally millions’ to make Jan 6 happen. Not only did he not get an citation of any kind to back up that claim, he was told he wouldn’t have to repeat that particular claim in his messaging.

Who is orchestrating these propaganda hits?

“This is the Good Info Foundation,” Moore said. “They boast on their homepage that good information is the lifeblood of a democracy. They further cry that we are in an information crisis. You know the crazy thing about all of that? They’re right.”
[…]
The Good Information Foundation’s website says it is the non-profit arm of Good Information Inc., a public benefit corporation. The corporation launched in October 2021 with the backing of billionaires Reid Hoffman, George Soros, and others, Axios reported at the time.
The CEO and founder of Good Information Inc., according to the report, is former Democratic strategist Tara McGowan. McGowan previously ran ACRONYM, a progressive non-profit that invested in for-profit companies building media and technology solutions for progressive causes. ACRONYM ran a $100 million digital campaign to defeat former president Donald Trump in the 2020 election. –NationalReview

Soros and other Democrat donors are actively paying people to push a vindictive, false agitprop anti-Trump message in the ‘defense’ of democracy, spreading lies in the push ‘against’ disinformation.

It’s worth noting that these are the same people calling the tune for fact-checks.

Does any of this look like the work of people who give a rat’s backside about truth, democracy, or decency? Or does it have the whiff of brimstone about it, and smack of just a naked lust for political power?

Sure would be a shame if the GOP tied up their resources with a tortious interference and defamation suit so it couldn’t be used to meddle in the next two elections … like they did with the NRA back in 2020, wouldn’t it?