A new ad for New York-Presbyterian Hospital is getting a lot of attention online — including from doctors.

The new ad is clearly intended to raise awareness of myocarditis in children, suggesting that inflammation of the heart in children is a common condition.

The video posted on YouTube was titled, “Pediatric Patient Story – Suri” and the caption read, “Suri had a bad stomach ache that turned out to be myocarditis, a serious inflammation of the heart. Our multidisciplinary pediatric critical care team worked to regulate her heartbeat – and got her back to feeling like herself.”

The video was then shared on Twitter by an account critical of the vaccine mandates and picked up by a doctor who was surprised at seeing an ad about childhood myocarditis which is a rather rare phenomenon.

The overall rate of myocarditis in children is 1 to 2 per 100,000 and generally stems from a cold virus.

A 2017 national study in Finland confirms this and concludes, “Myocarditis leading to hospital admission is relatively uncommon in children, but occurrence of myocarditis increases with age.” It also notes that myocarditis is more prevalent in males than females.

Perhaps creating that same ad with a 12-year-old boy probably would’ve been too spot on.

The 2nd study also said myocarditis occurs after vax at a rate of 66/million in this age group which is not correct. Two studies now, one out of Hong Kong and one out of Kaiser Permanente put that risk at about 380/million for boys 12-17 after dose 2.
References in next tweet. pic.twitter.com/K6iVKnm3ty

If vax not reliably preventing transmission
& there is not significant detectable benefit against severe disease at population level for 5-11 year olds + some risk
& if benefits of vax have not been demonstrated in previously infected, child mandates are not rational or ethical

Journalist Rav Arora posted two articles on Maajid Nawaz’s Substack about “The Truth About Vaccine-Induced Myocarditis.” Arora is a young man in his early 20s who had previously suffered from heart arrhythmia, so the issue of the mRNA shots affecting the heart is a particular concern for him. Weighing the risk vs reward, he chose not to get the jab and because of that decision, he is now basically a prisoner in his own country of Canada.

In Part Two, Arora cites recent data showing that the risk from the vaccines is higher than the risk of COVID for children.

As has been long-established, the greatest known risk associated with mRNA COVID-19 vaccines is myocarditis (swelling of the heart muscle). This risk predominantly affects men under the age of 40. According to an Oxford paper from December, this demographic has higher rates of vaccine-induced myocarditis than myocarditis from COVID-19 (specifically from Moderna doses 1 and 2 and Pfizer doses 2 and 3).

A recent paper published in the European Journal of Clinical Investigation synthesises the current body of research on the cardiac risk of vaccinating children and young adults. The authors conducted a rigorous risk-benefit analysis of child vaccination using data on co-morbidities, myocarditis, infection, and hospitalisation rates in children. They found COVID-19 vaccination to be favourable (the benefits outweigh the risks) in only a select few demographics.
Source: Radical Media (Emphasis Added)

Over a year ago, Dr. Venk Murthy tweeted about the problems with dismissing vax-induced myocarditis.

3) Myocarditis is a spectrum. Can range from rapidly progressive to death to mild chest pain with no further consequence. Like most diseases, the mild forms are much more common than the severe.

People with myocarditis are usually counseled to limit activity, placed on 1 or more meds and are at lifetime increased risk of cardiac complications. This can have profound consequences.

Another key awful part of this take is that it seems to be in a rush to minimize. We literally have only ~3 peer reviewed papers on this, each with a handful of cases plus some surveillance data (which are often not the same quality).

The Vaccine Adverse Event Reporting System (VAERS) shows a dramatic rise in post-vaccine myocarditis and pericarditis since the COVID jabs were rolled out. 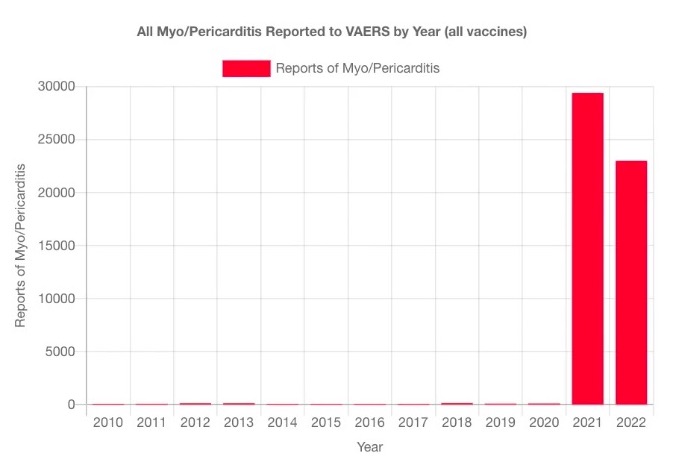 Reactions to the new ad from MDs ranged from frustration to horror at the blatant gaslighting. The one thing they all had in common, however, was that they know precisely why this ad is being aired.

Gee, what could have changed recently to make childhood myocarditis prevalent enough to make an advertisement about it?

The great ‘normalisation’ of myocarditis is children. https://t.co/nN59m3RfdK

Why have we not needed to worry about myocarditis in children, or unexpected deaths of colleagues, before?! 🤔https://t.co/g3Jh5K7ZD6 https://t.co/ORAVsIuRvU

This is simply demonic, Bro. https://t.co/wmhpApV3Ya

One has to wonder why academic hospitals are spending big money to advertise about a condition that was fairly rare prior to the C19 mRNA shots. https://t.co/5AOPJRAGzj

Dr. Prasad had a couple of thoughts…

Incredible ad. I am surprised the person in the video is not a man btw ages of 16-28, which is the highest risk demographic. I am also shocked the ad exists. 👇👇 https://t.co/DrOOAzqLkO

Why would anyone try to normalize myocarditis, when it is easy to try to reduce it?
Lower doses
Space out doses
No moderna & Fewer doses in young men
Exemptions for future doses for people who already had COVID19

All preferable to TV ads hinting heart inflammation is no biggie https://t.co/DrOOAzqLkO

Once people truly, fully and deeply understand that big corporations function as psychopathic entities, such ads will start to make sense https://t.co/Gl5GVRisOc

The Medical-Industrial Complex is making sure that the reaction to the jab is normalized in the minds of parents so that they don’t see it as a reaction to the mRNA shots.

Never forget what they have done.