Alternate Headline: Antifa defends “Drag Story Time Brunch” featuring a child mentored by a suspected pedo at a pub named after Satan that hosts fetish nights. This is the world in 2022.

Old Nick’s Pub in Eugene, Oregon advertised a “Drag Story Time Brunch” that was held last Sunday. It was supposed to feature an 11-year-old girl who performs as a drag queen using the stage name Vanellope MacPherson DuPont. 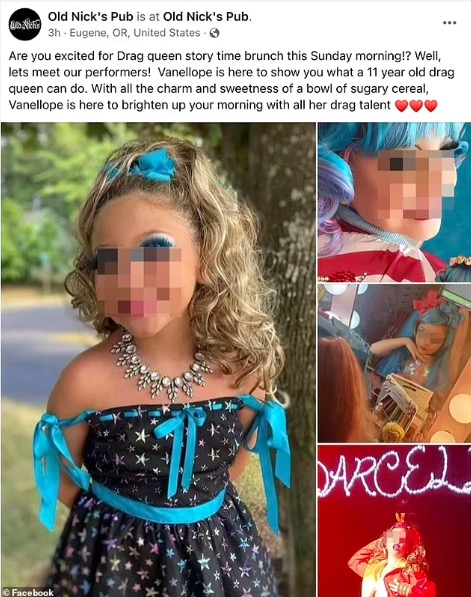 Before the event took place, someone commented on the social media post by Old Nick’s Pub that one of Vanellope’s mentors, Kelsey Meta Boren, 31, was charged in August with 12 felonies for allegedly creating and distributing child pornography. Boren, a former instructional assistant at Veneta Elementary School, posted numerous photos with Vanellope on Instagram referring to the child as her “drag kid.” Boren used the stage name “Alwaiz Craving” and in some social media posts, the child was referred to as “Vanellope Craving” — taking on the name of the “drag mom.”

Kelsey Boren, a 31-year-old Veneta resident, was arraigned Friday on two first-degree counts of encouraging child sexual abuse and one count of using a child in a display of sexually explicit content.
County detectives received information Thursday from the National Center for Missing and Exploited Children and Internet Crimes Against Children Task Force indicating Boren had been uploading child pornography to the internet, according to a release from the Lane County Sheriff’s Office.
Source: The Register-Guard

Old Nick’s Pub was deleting comments on its post and clutching their pearls that people would dare suggest that they would sexualize a child.

The girl’s handler, Jennifer Hibbs, another drag queen who goes by the name “Sunshine Ray MacPherson”, is doing the same. Hibbs says that Vanellope’s mother does all her choreography and made attempts to diminish the years-long relationship between Boren and Vanellope.

But social media posts show that Boren and Vanellope clearly met more than the “4 or 5 times” that Hibbs claims, and some of those photos of the girl look pretty suggestive.

Vanellope also has Venmo and CashApp where adults “tip” her, and there are photos of her being handed money with a pile of cash at her feet during her performance. 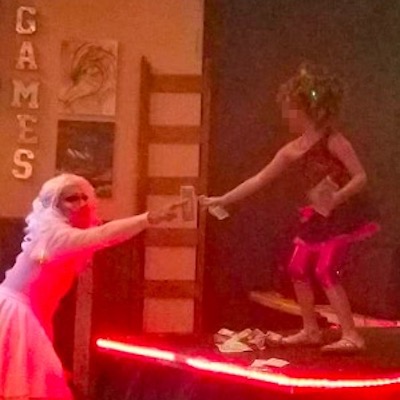 Question: What other professions besides strippers and drag performers are handed cash like this? Even buskers have money tossed in their instrument case or some other container or have an assistant walk around to take the cash. This is creepy.

Right-wingers were outraged at the overt sexualization of a child and organized a protest against the event. Antifa responded with a counter-protest.

In the end, Vanellope’s performance was dropped, which is a win for the protesters of the event.

Fierce clashes broke out at a ‘drag queen story event’ in Oregon which was slated to include a performance by an 11-year-old whose former ‘drag mom’ is a suspected pedophile.
Protesters against the event faced off with supporters outside the venue, Old Nick’s Pub, which is named after Satan, and which also holds adult fetish nights.
Some demonstrators on both sides of the roughly 200-strong standoff were armed, police said, including with semi-automatic rifles.
But despite the chaotic scenes outside the pub in Eugene, the event still went ahead – although the child performer, whose stage name is Vanellope MacPherson DuPont, reportedly did not take to the stage as planned…
…Dramatic footage of the protests on Sunday showed angry demonstrators ‘lob projectiles’ including smoke grenades at the rival crowds.
Supporters of the event shouted ‘go home Nazis’ and carried a banner which said: ‘Protect trans youth.’
Meanwhile, counter-protesters had a sign which read: ‘What kind of monster exposes kids to this?’
They also shouted ‘save our children’ at the supporters.
Source: Daily Mail

At the direct action at the child drag queen show at Old Nick’s Pub in Eugene, Ore. to oppose conservatives protesting the event, #Antifa assaulted a homeless man to the ground. The child had been trained by a “drag mom” who is jailed on pedophile offenses.pic.twitter.com/rU8WB1SRM0

KITV 4 reporter Jeremy Lee Quinn also covered the event and spoke to some of the protesters.

One of the protesters is trans and opposes children participating in drag shows.

Eugene Protest. Old Nick’s. The view of both sides of the street… pic.twitter.com/SeEWdEIra8

One interaction Quinn caught was interesting — a Christian Native American was being called homophobic for opposing the overt sexualization of a child at a pub under the LGBT+ banner.

One protester jumps in and says that the protest is about the sexualization of children.

Question: What makes this performance an LGBT+ performance? Is it because it’s drag? Drag used to mean cross-dressing, and this isn’t that, so what is it?

They can call this a “drag” performance because it uses the “art form” of drag. What does that mean? Well, basically it means that a little girl is dressed up as a caricature of a woman which is normally a done by gay men based on stereotypes of what femininity is while adults toss dollar bills at her.

It’s basically a gay burlesque that makes a mockery of womanhood and we’re all supposed to think that’s just fine and applaud a young girl being pulled into that world and exploited by adults for cash.

Ngo also posted a lengthy thread on Twitter ahead of the event reporting many of the details of this bizarre event and images from the young girl’s Instagram page.

Old Nick's Pub in Eugene, Ore. is defending its hosting of the child drag queen event, saying that those who criticize the event are the ones sexualizing the child. https://t.co/3A1S9TwBrL pic.twitter.com/NGsbVLfEY8

#Antifa are raising money to transport armed comrades to Eugene for the child drag queen event at Old Nick's Pub. The child was mentored by an accused child sex offender. @EugenePolice are aware of protest activities, & donations can be traced. https://t.co/JPGOefZAsO pic.twitter.com/RsKRINQwEo

Update: Old Nick's Pub released a statement from the "friends & family" of the child drag queen. It contains falsehoods about co-reporter @hunnybadgermom. It says she "released the name" of the child. She did not. Statement says she is in relationship w/a Proud Boy. That is false pic.twitter.com/OTCRQ9S1Ri

"Stabbin' Wagon," a far-left group from Medford, Ore., says it will support the child drag queen show in Eugene, Ore. on Sunday by giving out needles. Conservatives have announced a protest & #Antifa & the far-left say they will counter. https://t.co/1NTUjSN02W pic.twitter.com/rzbg8vVmEh

The Corvallis, Ore. cell of #Antifa is using @Venmo/@VenmoSupport to help raise money for bail in anticipation of their comrades committing crimes against protesters outside the child drag queen event in Eugene. https://t.co/20DvHJGDzu pic.twitter.com/99v8fYUlD1

This entire thing is just so weird.

It got quite heated with each side berating the other. (First video)

One guy in his truck is just fed up with the division and the way that the left in Oregon has been framing any opposition as a “war.” This normal guy dropkicks some reality to the Antifa nutters.

“We need to become America again and not this fucking bullshit.”
A vet at the park tells me Antifa blocked off the streets & told him his truck was ‘behind enemy lines.’ pic.twitter.com/vpO8jlcj3U

As usual, a veteran has that perfect mic drop.

That truck dude is a badass.