The ORIGINAL WuFlu nearly shut down the world, what could go wrong if Scientists play around with it and make it worse?

Both History and Art scream warnings at us that there are some things science should leave well enough alone.

In Jurassic Park, Jeff Goldblum’s character came right out and said it: 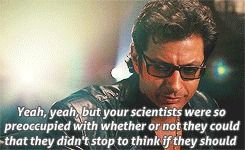 In living memory, Nazis conducted horrific experiments on human victims ‘in the name of science’, and more recently, Fauci — whose contempt for Congressional oversight in responding to questions could be cut with a knife — just cut ANOTHER check to EcoHealth Alliance, who may turn out to have had a direct role in the creation the virus in the first place.

For all of that, exactly zero lessons were learned. We’ve got a University in Boston playing around with features of the two most notable COVID strains — the original one with the greatest lethality and the Omicron with the greatest transmissibility. Then a light bulb went off.

Somebody asked the question: ‘What happens if we…?’ And nobody told him ‘this is a bad idea’.

As the CCP Virus adapted over time, it took on different characteristics. It affected the body in different ways.

When the shape of the spike protein changed, so did the way in which it infected people, or how dangerous it was to the general public.

They pulled the spike protein from the highly-transmissible Omicron strain and patched it onto the Original ‘wild-type’ strain with the highest lethality rate.

Then they started infecting mice with it.

The mutant variant — which is a hybrid of Omicron and the original Wuhan virus — killed 80 percent of mice infected with it at Boston University.
When a similar group of rodents were exposed to the standard Omicron strain, however, they all survived and only experienced ‘mild’ symptoms.
The scientists also infected human cells with the hybrid variant and found it was five times more infectious than Omicron. This suggests the man-made virus might be the most contagious form yet. — DailyMail

What other adventures did these intrepid researchers undertake? Surely not the deliberate introduction of the virus into human…? Of course they did.

Writing in the paper, they said: ‘In…mice, while Omicron causes mild, non-fatal infection, the Omicron S-carrying virus inflicts severe disease with a mortality rate of 80 percent.’
They said it signaled that while the spike protein is responsible for infectivity, changes to other parts of its structure determine its deadliness.
The scientists also looked at the different strains’ effect on human lung cells that were grown in the lab.
They found that the original Covid strain produced the high levels of infectious virus particles, and the new hybrid strain produced five times more infectious particles than Omicron. — DailyMail

How nice. Researchers have saved China the trouble of researching a super-virus themselves. What could possibly go wrong?

We have been fortunate in that most super-dangerous viruses in modern history have not been super-spreaders whose outbreak we were unable to contain within a geographical region.

What happens when we have something with a stratospheric lethality and AND a transmissibility to match?

Well, we’ve seen that story play out in human history, too.

One of the more notable historical examples involved wiping out almost a third of Europe’s population.

Arguably the most infamous plague outbreak was the so-called Black Death, a multi-century pandemic that swept through Asia and Europe. It was believed to start in China in 1334, spreading along trade routes and reaching Europe via Sicilian ports in the late 1340s. The plague killed an estimated 25 million people, almost a third of the continent’s population. The Black Death lingered on for centuries, particularly in cities. Outbreaks included the Great Plague of London (1665-66), in which 70,000 residents died. –National Geographic

What could possibly go wrong with a few scientists playing around with new variants, and publishing that information in scientific journals?

These are the people whose ‘scientific judgement’ and whose labcoat ‘authority’ was used as the basis of policy we were bullied into obeying.

Maybe, just maybe, that was a bad idea from the beginning.