What could go wrong with swapping out a proven formula of ‘Truth, Justice, and the American Way’ for a mega-dose of gender-bending wokeness? DC Comics ‘effed around and found out’.

It turns out that ‘go woke, go broke’ is more than just a catchy slogan. It has all the solid reality of the blunt end of a pool cue to the face.

There are two parts to this hilarious story. One is the financial failure of wokeness the other… is a victory that gives fans of traditionalism the last laugh.

But we’re getting ahead of the story here. Let’s go back to the beginning.

Not so very long ago, a wave of identitarian politics took the comic world by storm. Everyone wanted their hero to check an identity box to send a political message. In an intentional repudiation of straight white male heroes, people were either retconning old characters by having them come out of the closet, or they were dreaming up new ones to fit the political or racial narratives of the current cultural context.

Superman is white and male, but that doesn’t mean his archetype can’t be reimagined. If anything, doing so would be seen as an enormous cultural ‘win’ for the activists. For them it would be a way of ‘capturing’ and co-opting something that once symbolized traditionalist America.

Management at DC Comics green-lit a project of recasting the Big Dog of all American superheroes by introducing a version of Superman (ie: the son of Clarke and Lois) who has the powers of Superman, but the more *ahem* flexible morality of post-modern American culture.

It was a superhero made-to-order for the blue-haired activist crowd.

The plan backfired in two very different ways. First, the obvious one — people weren’t exactly wowed by the new concept. They’re pulling the plug after running only 18 issues.

In the months after Jon Kent made his debut in July 2021, the 17-year-old character embraced various social issues, including school shootings, fighting climate change deniers and the deportation of refugees.
Then in the series’ fifth issue Jon Kent began a relationship with a male friend and refugee ‘hacktivist’ Jay Nakamura.
In October last year Tom Taylor, who authored the series, went to the New York Times to reveal that Kent would be coming out of the closet.
He said in an interview: ‘The idea of replacing Clark Kent with another straight white savior felt like a missed opportunity.’ — DailyMail

Gee, that idea didn’t pan out the way the guys in their corner offices had hoped? How could such a brilliant plan possibly fail?

How could there NOT be a market for turning Superman into a bisexual Greta Thunberg? 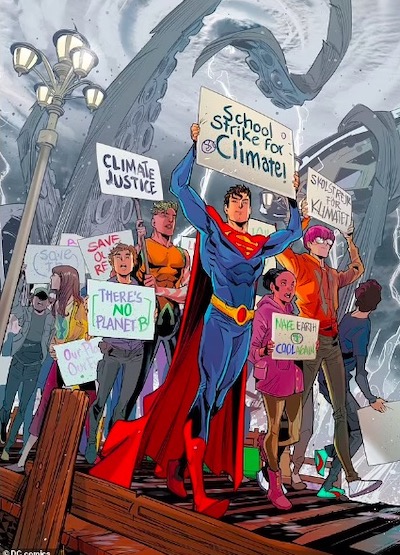 Gee, folks. That’s a head-scratcher, some real ‘riddle wrapped in a mystery inside an enigma’ level stuff here.

Meanwhile, musician, YouTuber, and libertarian political commentator, Eric July, expanded his talents to writing an “anti-woke” comic book and the results were spectacular.

What’s so amazing about this is that the colorist for July’s “Isom” is Gabe Eltaeb… who used to work for DC Comics.

Gabe Eltaeb worked as a colorist for DC Comics but quit last year in protest of the agenda behind what he described on Twitter as an ‘America hating’ book.
Eltaeb took to Twitter to celebrate the end of Superman: Son of Kal-El.
He also left his position at DC soon after learning that DC was removing America from Superman’s famous motto: ‘Truth, Justice and the American Way.’
Eltaeb then began working on his own ‘anti-woke’ comic, Isom, with writer Eric July.— Daily Mail

The first issue was just released this month, but it had made over $3 million in pre-order sales in just 10 days when the campaign was launched in July.

#Isom #1 is HOT! Comic book shops can't keep it in stock and its collector's value is already climbing the charts! Tell your LCS that you WANT ISOM! pic.twitter.com/kcYMRSD69G

We haven’t reached anywhere near final form. There will be improvements and even better quality with experience. But it’s also economic.

Isom #1 made a 3.7 mill, but because it was done before the campaign, a fraction of that went INTO the project.

NOW we have a cash reserve

The Rippaverse website has an old-school ethic that they lay out in their about page. They know customer respect is earned. They are committing to characters and timelines that matter, not ones that will have them hit a ‘reset button’ and start over, or use some kind of a lazy time travel cheat to undo.

If you like comics the way they were before they were subverted by the woke crowd, Rippaverse might be what you’re looking for.

Many conservatives TALK about taking back the culture. This guy is walking the walk. Before we can take back the culture, we’ve got to properly master ourselves. That brings us to a book recommendation. A book that’s gone to #1 just one day after coming off the presses.