Databases are a great place to find all sorts of interesting hard data, including the kind that Democrat demagogues hope you never hear about. For example…

Democrats have been campaigning long and hard to throw as many hurdles as possible in front of gun ownership.

Biden wanted to appoint ‘Beto’ as his Gun Czar. And then there was this August 2019 exchange on CNN

“So to gun owners out there who say, ‘Well, a Biden administration means they will come for my guns,’” Cooper said.
Instead of denying this would be so, Biden was pretty upfront about what he plans to do.“Bingo,” he responded to Cooper.
“You’re right, if you have an assault weapon.” –Western Journal

If anything, Joe has doubled down on his hostility toward the Second Amendment since taking office.

He does it in the name of saving lives. But what do the cold, hard facts tell us about the supposedly menacing sporting rifle category — or even rifles more generally?

Are rifles a public menace making the streets run red with blood? Actually, no.

Handguns are responsible for a lot of deaths, to be sure. But a pretty big chunk of that number can be accounted for in connection to gang activity.

Much of the killing not attributed to actual gang activity can be attributed to dystopian Democrat cities with some combination of the soft-on-crime legal system, lax enforcement, understaffed police, soaring crime, and an astonishing unsolved murder rate.

Here are the FBI’s own Crime Data figures about how people were murdered. We highlighted a few numbers to bring them to your attention… 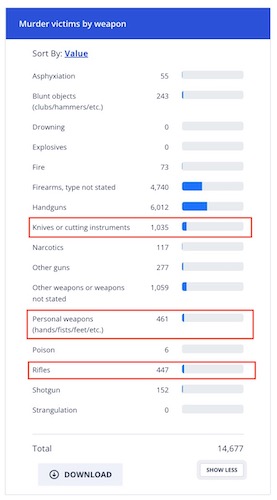 Those are the big categories.

Here is where the numbers get more interesting.

There is a big drop-off between those and the next biggest grouping of two ‘generic’ categories of similar size.

There is another significant drop-off in size with the next-biggest category being less than half of that number.

According the the FBI’s own data, a person is literally more likely to die from a handgun, knife, or kick to the head than he is from those ‘scary black rifles’.

If you want to tell Biden’s blowhards exactly what you think of their gun-grabbing, we’ve got a few fun ways to say it in our store.

For all the hate the AR-15 has been getting from the left lately this one might be particularly ‘triggering’ for them. (Available in two colors) 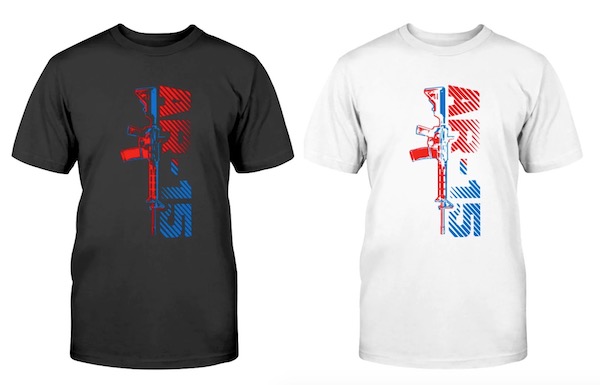