There is a reason the State Department issues advisories about travel to Mexico. This is a fine example of that reason.

(Related: Don’t Book That Mexican Winter Getaway Until You Read THIS Dire Warning!)

Gang violence has long been a thorny issue in Mexico, but now that gangs are swimming in rivers of cash collected from wave after wave of humanity crowding over the US/Mexico border, gangs become more powerful and the issue of violence becomes even more relevant.

Yesterday, it was a community in Southern Mexico that felt the sting of this violence.

That’s a LOT of bulletholes… 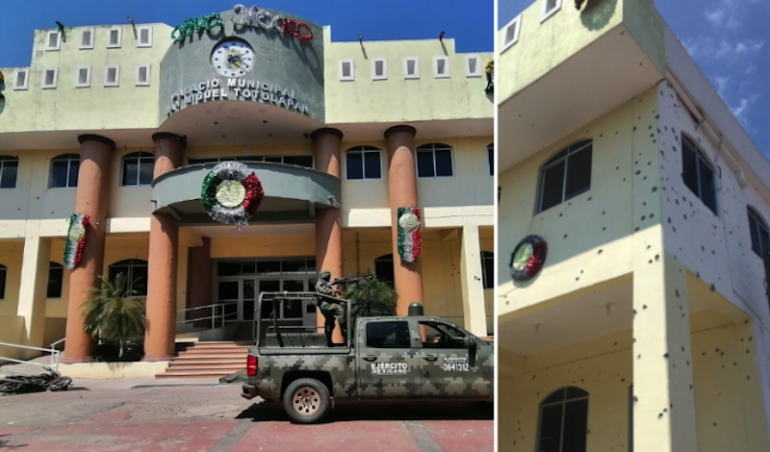 Attackers gunned down a mayor, his father and 16 other people in the southern Mexican state of Guerrero on Wednesday, authorities have said.
The state’s attorney general, Sandra Luz Valdovinos, told Milenio television late on Wednesday that 18 people were killed and two were wounded in the town of San Miguel Totolapan. Among the dead were the mayor, Conrado Mendoza, and his father, a former mayor of the town, she said. Two additional people were wounded.
Images from the scene showed a bullet-riddled city hall.
…San Miguel Totolapan is a remote township in Tierra Caliente, which is one of Mexico’s most conflict-ridden areas, disputed by multiple drug trafficking gangs.
In 2016, Totolapan locals fed up with abductions by the local gang Los Tequileros kidnapped the gang leader’s mother to leverage the release of others. — Guardian

That’s a horrific event. But those of us who live in comparatively safe communities are inclined to write that off as a single horrific incident.

A statistic buried deep in the Guardian’s article throws a spotlight on just how bad the situation is there.

Since ‘AMLO’ took office on December 1, 2018, gangs have murdered 18 mayors and 8 state legislators. The left loves to wag their fingers at us about ‘threats to democracy’, it’s hard to imagine a more obvious threat to democracy than that.

Making matters worse, our own Government policy needs to shoulder at least part of the blame for incidents like this. The fact is, Biden’s broken border is practically turning El Dorado’s mythical wealth into a reality for the Mexican Cartels.

Money is the lifeblood of these criminal cartels, and with Biden in office, they’re making it hand over fist.

Over the summer, Breitbart caught the NYTimes burying this little nugget of truth some 14 paragraphs deep in a story that was otherwise sympathetic to Biden’s broken border.

The cartels and coyotes are earning $13 billion a year by delivering economic migrants to U.S. workplaces via President Joe Biden’s welcoming border agencies, the New York Times reported Monday.
The current revenue is 26 times larger than the $500 million the cartels earned under President Donald Trump’s low-migration policies, according to the July 25 report. –Breitbart

If it’s true that ‘elections have consequences’ it’s also true that tragic stories like this one are among them.