Paypal took a serious kick in the wallet after a plan to ‘fine’ users $2500 for ‘misinformation’ was exposed and then retracted. But that isn’t the end of the story.

Customers rushed for the exits when this story went public. Can you can guess which day the news about this policy first broke?

Here’s a hint — look for a near-verticle line going down.

The bleeding must have been pretty significant for them to take action like this: 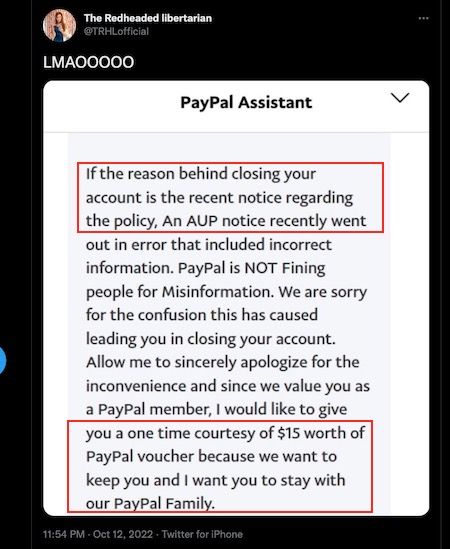 But they’re about to learn that some bells cannot be unrung.

ClashDaily’s reporting on the issue raised the obvious problem that this would essentially strip Americans of their rights to due process under law. They could face real losses without any proper protection, recourse, or even something as basic as a presumption of innocence.

TECH TYRANNY: Paypal Walks Back Plan To FINE People $2500 For ‘Disinformation’
At least one Federal oversight body has taken notice… and will be looking into this incident.

Consumer Financial Protection Bureau Director Rohit Chopra told CNBC suggested that the policy, which PayPal said over the past weekend was issued in error, was too extreme.
“I’ve never actually never heard of a payment system thinking that it could fine someone for legal expression that their users are making,” Chopra told the outlet on Wednesday.
“We have ordered most of the major Big Tech firms and payment companies to provide us with information about how are they making decisions about who they kick off their platforms,” Chopra stated. “But we also need to look into whether they believe they can be fining users for legal activity.”
Chopra said the Consumer Financial Protection Bureau would have to investigate the matter and would not act yet. However, he noted it might be “new territory” for the agency to investigate. — EpochTimes

They were assuming the right to use powers that they have no authority to weild.

Have our new Big Tech overlords already gotten so comfortable with the power they openly wielded in a coordinated effort to kneecap a sitting President that it doesn’t occur to them that there should be any limits whatsoever?

The stakes in the fight we’re called to take a stand in keep getting higher. We need to be grounded in something bigger than the political back-and-forth of today.

That’s where this book comes in. There’s a reason it went directly to #1.