PayPal just waited out the outrage and quietly brought the policy back.

Eagle-eyed Twitter users noticed that PayPal brought back a repugnant $2500 fine for “misinformation” that they said was an “error.”

ICYMI – PayPal has reinstated its $2,500 fine for "misinformation."

Outrage over the “disinformation” fine caused a mass exodus of users and the stock to drop just a couple of weeks ago.

PayPal said that the policy to fine people $2500 per violation was an “error” after intense backlash.

“PayPal is not fining people for misinformation and this language was never intended to be inserted in our policy. We’re sorry for the confusion this has caused,” said a spokesperson for PayPal

Many right-wingers, however were skeptical — if they didn’t intend to implement it, why draft it?

Here is PayPal’s User Agreement clearly stating that if users don’t abide by the “Acceptable Use Policy” they will be fined $2500 per violation.

And what is considered “prohibited” in the Acceptable Use policy?

Point 2 includes transactions involving “the promotion of hate, violence, racial or other forms of intolerance that is discriminatory or the financial exploitation of a crime.”

These sorts of policies have been weaponized against right-wingers for simply espousing mainstream conservative views. 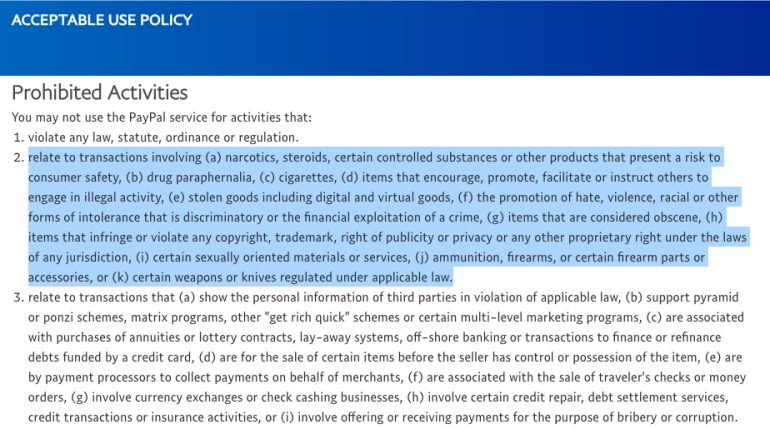 Tim Pool covers the PayPal policy here and how the rules on “misinformation” and “intolerance” are subjective and impossible to define.

PayPal users would probably be surprised to learn that the payment processing app can hold all of the money in their accounts for up to six months or longer if PayPal believes they might be held liable.

It’s right there in the User Agreement.

So PayPal KNOWINGLY LIED about its BS $2500 fine, letting the blowback die down before adding it to their TOS?!

You're Stock ALREADY TANKED.
Now that you were caught LYING, this'll convince EVEN MORE PEOPLE TO LEAVE. pic.twitter.com/pfqo67d4W8

Close your PayPal account. They will steal your money for telling the truth on social media. https://t.co/knzg0lywSF

In case you missed it, PayPal has reimplemented its $2,500 fine for misinformation. They never removed the fine for transphobia/racism/bigotry either.

Is PayPal going to fine itself for spreading misinformation?https://t.co/nzwQPsFHAF

The article notes that PayPal has close ties to the WEF.

PayPal’s Head of Global Environmental, Social, and Governance (ESG) Strategy is also a member of the WEF’s Global Future Council on Social Cohesion and Just Transition.
In addition to being a WEF Young Global Leader, PayPal’s Ahmed has authored articles for the WEF website, including “To address inequalities we need a new vision for trade.”
“Businesses also have an important role to play in enabling inclusive trade. Many have stepped up to publicly support movements for minority rights and inclusion,” he writes before proposing a “public-private partnership for economic inclusion.”
Source: War Room

Winters also noted that PayPal’s President and Chief Executive Officer, Dan Schulman, has authored articles for the WEF. One, in particular, seems rather ironic: “The thing that separates good companies from great ones: Trust.”

After the misdirection and overt “disinformation” about the policy, it doesn’t really look like PayPal is one of those companies that cares much about trust.

Some of these high-on-their-own-power Libs hate you and everything you stand for and will look for ways to make your life hell while you make them rich.

It’s time to move away from PayPal and find a conservative alternative.

One alternative is Dan Bongino’s payment processing platform, AlignPay. It promises to be “cancel culture free.”

This is why the parallel economy is absolutely necessary.