We’re not supposed to talk about election integrity. Except when the topic pushes a Democrat narrative. How convenient for them.

Kari Lake recently showed the media gatekeepers exactly what she thought of their ‘standards’ as deciders of who gets to exercise free speech and who should be shamed for it.

Here are a few recent stories about election integrity you won’t have seen on the 6’oclock news, in no particular order.

A judge will NOT be blocking election monitors in Maricopa county. Note the ‘impartial’ reporting by the alleged news wire which makes a point of highlighting personal biographical details about the judge, despite his explicit acknowledgment of First Amendment limitations of his ability to intervene in this case…

U.S. District Court Judge Michael Liburdi said the case remained open and that the Arizona Alliance for Retired Americans could try again to make its argument against a group calling itself Clean Elections USA. A second plaintiff, Voto Latino, was removed from the case.
Liburdi concluded that “while this case certainly presents serious questions, the Court cannot craft an injunction without violating the First Amendment.” The judge is a Trump appointee and a member of the Federalist Society, a conservative legal organization. –AP

Florida’s new election crimes unit will be looking into a whistleblower complaint. This complaint is brought forward by a Democrat, no less:

Cynthia Harris, a Democrat who ran unsuccessfully for District 6 commissioner in Orange County, which includes Orlando, provided a sworn complaint to the election crimes office, alleging left-leaning organizations have been perpetrating a scheme to encourage residents in black neighborhoods to apply for mail-in ballots and to fill out those ballots, which she said have been collected by paid canvassers, and sometimes altered, all in violation of state law.
In an interview with The Washington Times, Ms. Harris said she has video evidence of paid ballot harvesters operating in Orlando neighborhoods in both 2014 and 2017, and that the scheme has been going on for decades, continuing through the 2020 election and the 2022 primary. –Washington Times

Is the FBI now policing free speech in elections?

Project Veritas leaked a cheat sheet sent out by the FBI that categorizes ‘misinformation’ as an ‘election crime’. 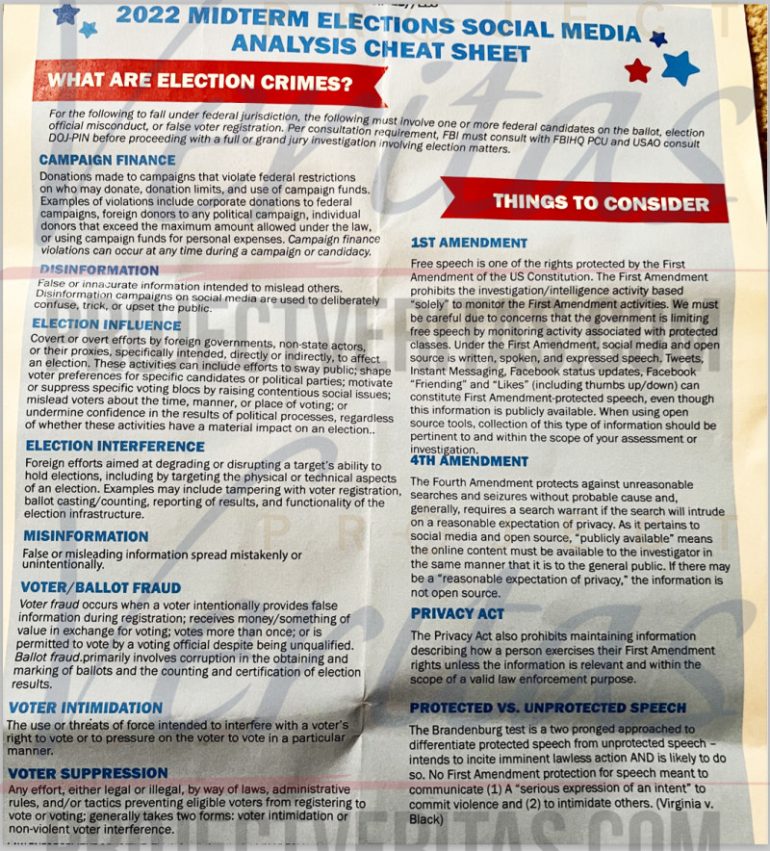 There was a bizarre story about a news channel airing *election results* showing Kari Lake (who is up by eleven points) losing in Arizona to Katie Hobbs. Keen observers of the news (ie: non-journalists) will note that election day has not yet happened.

Supreme Court Justice Elena Kagan on Wednesday temporarily blocked enforcement of the Jan. 6 committee’s subpoena seeking the phone records of Arizona Republican Party Chair Kelli Ward.
…The move by Kagan, a liberal justice who handles emergency applications that originate in Arizona, means the Supreme Court as a whole will decide how to proceed. The House committee has until Friday to respond to Ward’s request to quash the subpoena, which was filed earlier Wednesday.
Ward and her husband, Michael Ward, were among 14 of 84 so-called alternate electors subpoenaed this year by the Jan. 6 committee, which cited their association with bogus documents claiming President Donald Trump had won the 2020 election in their states. — NBC

A Washington state judge on Wednesday fined Facebook parent company Meta
nearly $25 million for repeatedly and intentionally violating campaign finance disclosure law, in what is believed to be the largest campaign finance penalty in U.S. history.
The penalty issued by King County Superior Court Judge Douglass North was the maximum allowed for more than 800 violations of Washington’s Fair Campaign Practices Act, passed by voters in 1972 and later strengthened by the Legislature. Washington Attorney General Bob Ferguson argued that the maximum was appropriate considering his office previously sued Facebook in 2018 for violating the same law.
…“I have one word for Facebook’s conduct in this case — arrogance,” Ferguson said in a news release. “It intentionally disregarded Washington’s election transparency laws. But that wasn’t enough. Facebook argued in court that those laws should be declared unconstitutional. That’s breathtaking. Where’s the corporate responsibility?”
…Each violation of the law is typically punishable by up to $10,000, but penalties can be tripled if a judge finds them to be intentional. North fined Meta $30,000 for each of its 822 violations — about $24.7 million. Ferguson described the fine as the largest campaign finance-related penalty ever issued in the U.S. — NBC

A cloud hangs over a quarter million disputed ballots in Pennsylvania…

There is a claim — by Republican State representatives in Pennsylvania — that some 240,000 ballots were sent out to Pennsylvania voters whose voting eligibility had not been verified.

This is important because for a few reasons. First, the Constitution places final authority for elections squarely in the hands of State legislators, but disputes between the state and an election offical make it clear that she has been uncooperative in abiding by the explicit conditions set out by the duly-authorized legislators. This story was about her: ELECTION INTEGRITY: Pa Official Sued By RNC Over Refusal To Obey Mail-In Ballot Election Law

Here’s how Newsweek framed the story, note the scare quotes:

The post references a claim made by Pennsylvania State GOP Representatives Kathy Rapp, Joseph Hamm, Leslie Rossi, Mike Puskaric, Mike Jones, Eric Nelson, Barry Jozwiak, David Rowe and Tracy Pennycuick. The representatives on October 25 sent a letter to acting Secretary of State Leigh Chapman citing “records of 2022 Mail Ballot Data” allegedly showing that, as of October 21, over 240,000 counties had already mailed out the “unverified” ballots.
…The Pennsylvania Department of State denied the allegation made by the Republican representatives and called their claim “misinformation,” Reuters reported on Friday.
“The department believes the reference to 240,000 unverified ballots is the result of misunderstandings of the law, the department’s data, and the counties’ workflow,” a state department spokesperson said, according to Reuters. –Newsweek

There was also the predictable heavy use of phrases like ‘debunked’, which never seem to appear in stories about Hillary Clinton’s Russian collusion claims, or Stacy Abrams.

However, the deputy secretary added that if someone submits an invalid Pennsylvania Department of Transportation ID number or if the last four digits of their Social Security number cannot be verified for a mail ballot application, then the counties must still send the ballot to the voter without the ID verification. Marks also said that “the ballot doesn’t count unless the voter provides a valid form of ID.”
In their letter, the legislators cited Pennsylvania Department of State guidance issued nearly two weeks after Marks’ testimony that contradicted him, saying that voter identification must be verified “before sending the ballot to the applicant.”
“Due to this conflicting information, conscientious election workers could unknowingly accept and count ballots for which no verification has ever occurred,” the legislators wrote. –JustTheNews

And in Big Tech?

Even with Elon Musk taking over, the old guard’s rules were enforced to the bitter end. Just the News has been reporting stories like these and, as of the last day of the old regime, were still paying a price for it by the Bird App’s Algorithm.

Shortly before Musk took ownership Thursday night, Twitter slapped an “unsafe” warning on a JTN report about a former Democratic candidate’s sworn affidavit alleging years of illegal ballot harvesting in politically important central Florida, which prompted a state criminal probe.
The warning tells readers the “misleading” content “could lead to real-world harm.” It’s not inherently tied to the report’s web address, but only displays as an interstitial when shared by certain accounts, including those of JTN founder John Solomon and Upward News.
…It appeared on polling firm Rasmussen Reports’ tweet within a minute of its posting. Twitter appears to be suppressing search results for tweets sharing the report — not even Solomon’s shows up.
Twitter put the same warning on a JTN report about the legal distinctions between fully approved and emergency-use COVID-19 vaccines last year. It also suspended Solomon for sharing that vaccine report and a subsequent report about a peer-reviewed study of COVID vaccines. –JustTheNews

We’ll watch and see whether that trend changes as the New Guy asserts control in his platform.

Until then, you know what to do: