The Balenciaga ad campaign featuring kids with teddy bears in fetish gear has sparked outrage on social media… but what if it’s not the ONLY disturbing photo shoot?

A Bernie-supporting YouTuber, ShoeOnHead, seems to be the first high-profile account to post photos of the creepy Balenciaga ads for their Spring/Summer 2023 collection.

Her Sunday night posts showed a couple of images of the disturbing ads and zoomed in on some documents scattered on what looks like a desk near a Balenciaga bag.

THEY DELETED ALL OF THEIR INSTAGRAM POSTS LMAO pic.twitter.com/ZWfgROhngr

(By the way, Shoe is the kind of leftist that we need more of — we might disagree vehemently on some policy positions, but she doesn’t go scorched-earth on anyone to the right of her.)

The photos went viral on Twitter and the story was soon picked up by Tucker Carlson’s show. For two days, he spoke out about the luxury brand’s disgusting ad campaign.

Here is his opening monologue from Tuesday night explaining that it’s things like this that cause the so-called “conspiracy theories” about elite pedophile rings to keep cropping up.

Tucker Carlson goes off over the sexualization of children:

That was a follow-up to a report he made on Monday.

Balenciaga issued a statement on Tuesday apologizing for the tasteless ads.

“We sincerely apologize for any offense our holiday campaign may have caused. Our plush bear bags should not have been featured with children in this campaign. We have immediately removed the campaign from all platforms,” reads a post on the Balenciaga Instagram Story.

“We apologize for displaying unsettling documents in our campaign,” the company said in a second post. “We take this matter very seriously and are taking legal action against the parties responsible for creating the set and including unapproved items for our Spring 23 campaign photoshoot. We strongly condemn abuse of children in any form. We stand for children’s safety and well-being.” 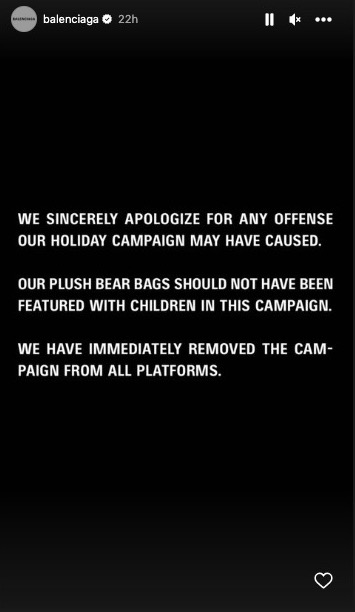 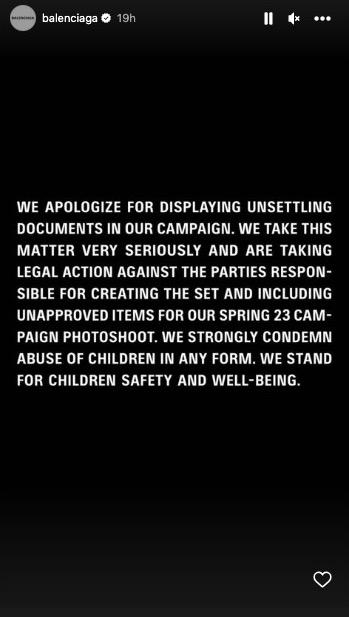 Well, that should be interesting.

But first, it’s important to clear up a couple of things.

Far be it from me to correct Tucker and (sorta) defend Balenciaga, but he did get a few details wrong, as did ShoeOnHead.

They both said — and other right-wing websites and commentators have repeated — that the photos of the documents were from that particular photo shoot with the kids.

The opinion hidden under the bad is this one. https://t.co/QzffuOCqJx

It wasn’t. It was from another campaign for the same season — one where Balenciaga partnered with Adidas after Kanye West brought them together.

Every professional advertising dollar spent has a specific buyer in mind. Who do you think was Balenciaga & Adidas target demographic for this ad?

So these are two different photo shoots. 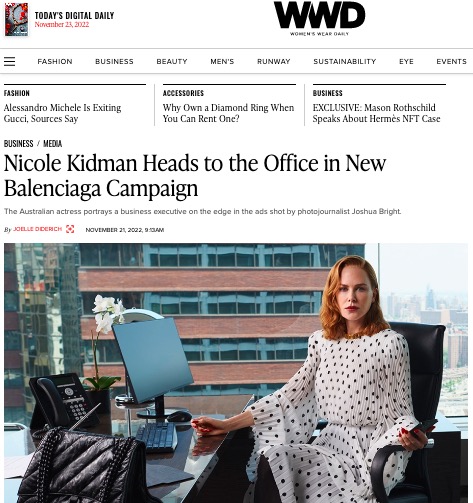 The black version of the bag on the table with the court documents is shown in white in a video featuring South Korean Model Han So-hee on the Balenciaga website. 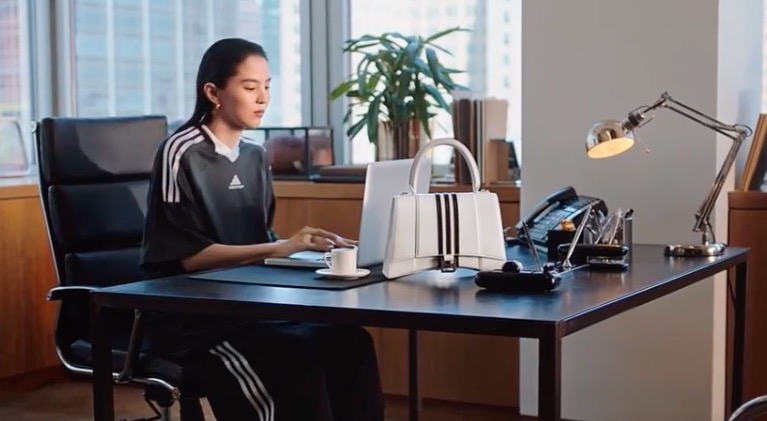 I post this thread with some hesitancy, but… geez it’s awful!

The redhead in the photo in the thread is French actress Isabelle Huppert.

This Twitter user posted photos and did some digging on the titles of the books on the desk… and it’s not helping the claim that the photos with kids are a one-off.

Shout out to @WHOTFIsdaquan for pointing this debauchery out!

#Balenciaga you need to explain ALL of this pic.twitter.com/1BC23bvloK

#Balenciaga 2022 deleted their posts once again on Instagram pic.twitter.com/UywmqWh05E

#Balenciaga had this artist’s book in their shoot. I was really reluctant to repost some of these images, but sometimes our hearts need to be disturbed. Let the world know!!! pic.twitter.com/JMCGW4aB1X

Let me just take a moment to say that Balenciaga ad campaigns have always been weird — their last fashion show featuring this collection looked like it was in some muddy dystopia. I’ve never really understood these luxury brands that have clothes that seem unwearable — it all seems like a mashup of clothing from “The Capitol” in The Hunger Games to the “Gar-bah-ge” fashion line in Ben Stiller’s Zoolander.

Heck, Balenciaga is selling bags that look like trash bags for $1790. 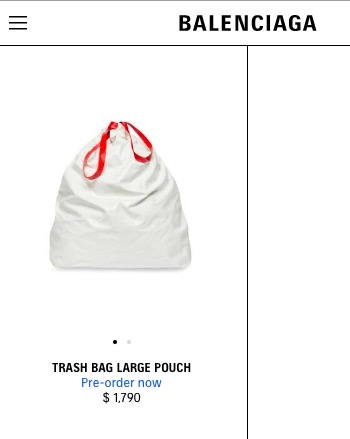 Life imitates art that imitates life. We live in a simulacrum.

Both high fashion and modern art are weird and tend to be edgy and creepy… but it’s admittedly kinda strange to have those books just sitting on the desk of what’s supposed to be some high-powered executive.

Please understand that this could all be just a very, very disturbing coincidence — but it could also be something incredibly nefarious. We just don’t know if it’s a crazy Pizzagate conspiracy theory or indications that this is a Jeffrey Epstein sort of situation.

But there’s another interesting twist here…

How does this square with the way that Adidas and Balenciaga treated Kanye West over his anti-Semitic tweets? Are people redeemable or not? Kanye said some indefensible things about Jewish people… but Balenciaga — and seemingly Adidas — posted at least three different advertisements for the same collection that all have creepy, weird pedo stuff referenced if not overtly displayed. This was done despite their layers upon layers of vetting before the ads go out.

These are not fly-by-night operations here — they’re corporations that have legal teams and every tiny detail is scrutinized. So, how could this have happened?

Balenciaga and Adidas tossed Kanye aside for his anti-Semitism, but are they going to face the same kind of heat for seemingly winking and nodding to sexualizing children?

The self-righteousness of these people is disgusting.

Ye has also announced that he’s taking his Balenciaga, Adidas, and Gap merchandise and will be cutting it up and marketing it for $20 as Ye2024 merch… because he’s running for President again.

Ye aka Kanye West says that he’s running for office once again & he’s currently working on a 2024 campaign. He’s also planning on selling #Ye24 merch made from Balenciaga, Yeezy, Adidas, & GAP for only $20! 👀🗳️💯 THOUGHTS⁉️pic.twitter.com/xAeuAt3Ta7

Weird how all of that is happening at the same time, isn’t it?

A lot of people aren’t buying Balenciaga’s apology… and really, can you blame them?