Of all the lies Biden has told, there is one we might wish was true — the one about his having cut the National Debt in half.

Because the crapstorm gathering on the horizon would only be half as scary if our debt really WAS half its size.

Democrats have never yet found a problem they couldn’t address by throwing more money at it. Just throw it on the national credit card and bill someone else for it. What could possibly go wrong?

For one thing, that bill eventually comes due.

As just one example, Joe Biden is really excited about how many people are cashing in on that Executive Order he wrote that claims to have forgiven billions of dollars worth of student debt. In reality, it just moved that debt over to the national credit card. The plan is, get the political benefit for that ‘gift’ now, and leave the bill to our children’s children’s children.

What happens to ordinary families when their credit card gets declined? They lose their ability to borrow.

What happens before that? Carrying a balance means you have to make minimum interest payments that don’t really reduce the amount you owe. The larger the debt you carry, the higher that minimum payment gets.

What happens when interest rates go up, or your credit rating goes down? Suddenly, what seemed like a manageable payment becomes monstrous. And anyone lending you money knows you might not be good for it, so they charge even MORE to borrow from them.

It’s a self-feeding loop that a character in Hemmingway’s work succinctly described this way: “How did you go bankrupt?” Two ways. Gradually, then suddenly.”

What does this have to do with National Security?

Homeowners aren’t the only people being hammered by rate hikes the Fed used in hopes of pumping the brakes on inflation. It’s hitting Uncle Sam in the wallet, too. 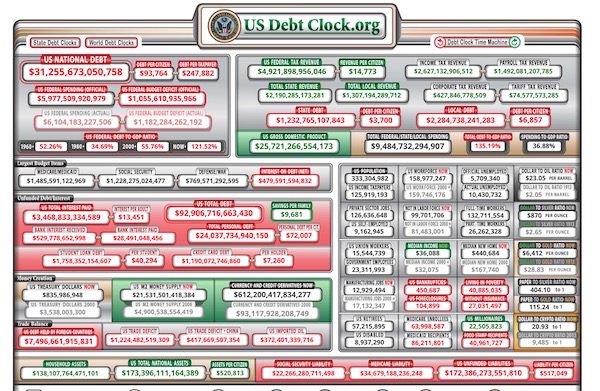 Soon, our interest payments on debt maintenance will exceed our entire military spending.

The cost to finance America’s growing mountain of debt is rising rapidly as the Fed scrambles to put out the inflation fire by raising interest rates and shrinking its nearly $9 trillion balance sheet.
During fiscal 2022 alone, the federal government made $475 billion in net interest payments, up from $352 billion the prior year, according to the US Treasury Department. For context, that’s more than the government spent on veterans’ benefits and transportation – combined. And it’s nearly as much as the $677 billion spent on education.
By 2025 or 2026, the United States may hit a bleak milestone: Federal interest payments could exceed the country’s entire defense budget, according to Moody’s Analytics. For context, defense spending stood at $767 billion in fiscal 2022. — CNN

Have you considered the consequences of the biggest line item of our budget becoming debt maintenance? It means heavy tax burdens on the citizens with literally NOTHING to show for it.

No services. No benefits. Nothing but pure profit for whichever international creditors were willing to ante up the cash politicians needed to make their promises.

And just like any household budget, when your discretionary income is being eaten up on interest charges, you have that much less for all the things you actually want or need.

Democrats have begun making accusations that Republicans want to nuke Social Security programs. It’s easy for them to spout off accusations when the media will gladly amplify their talking points.

If we had honest journalists in this country, they would be responding to those accusations with this direct question.

We have been told for years that Social Security, for example, would run out of money by (insert year here). If reckless Dem spending policies are both triggering inflation AND the FED is raising interest rates to offset that inflation, how will the ravenous monster of debt maintenance endanger our ability to both provide for the common defense — per our Constitution — and also make good on promises of ongoing Social Security for our elderly?

What are Democrats who ‘care’ so very much about these government programs doing to make sure they don’t go bankrupt the way Detroit did?

To put a real face on the story:

Five years after Detroit’s bankruptcy filing, retiree Barbara Yokom feels the financial hit each time she pays about $940 a month for health coverage.
It’s a bill that Yokom, 64, receives now only because the city ran into deep financial troubles and filed for Chapter 9 bankruptcy relief July 18, 2013. Her health-care insurance was covered when she retired in April 2012 after 38 years of working as a library technical assistant at the main branch of the Detroit Public Library. –Detroit Free Press, 2018

How, exactly, do profligate federal Democrats intend to avoid revisiting Ms. Yokom’s sad story on Americans on a national scale?