It’s easy to get swept up in partisan bias, especially in elections that have such high stakes as the ones we’ve seen lately. But there is a technique that can check your biases.

Officially, the result for the election for Arizona’s next Governor has been called in favor of the Democrat, Katie Hobbs.

For a gutless candidate too afraid to face either her opponent, or the public, this announcement leaves many scratching their heads. The blue team, naturally, will celebrate the win and call it a perfectly fair and reasonable result. The red team is doing exactly the same thing that Kari Lake herself is… calling BS.

If we’re seeing this through partisan goggles, is there no way to come to common agreement about the facts, or will we see this same problem play out with every close election result?

Fortunately, there is a technique we could apply that can help someone of either team step away from their partisan goggles. It’s the ‘shoe on the other foot’ approach. All it takes is imagining a scenario in which the exact same situation happened, but with the opposite result.

In this case, our hypothetical would have Katie Hobbs facing a disappointing defeat with all the same lingering questions we see on the red team. All we need to do to measure the reasonableness of Lake’s objection is to imagine how each of these questions would be handled by a losing Democrat.

Let’s look at a few of the curious details.

1) Katie Hobbs had direct oversight of the election in which she herself was a candidate whose votes were being counted.

Could she raise in her defense that this has happened before? Sure. She could point to historical examples like Brian Kemp running for Governor in Georgia while serving as Secretary of State. Of course, his election is a little different than this one in that he won by nearly 50,000 votes. (Even if Abrams still claimed to have been cheated out of the job.)

>h2>2) We now have direct evidence of political activism by the members of the team whose job it is to impartially count the votes. 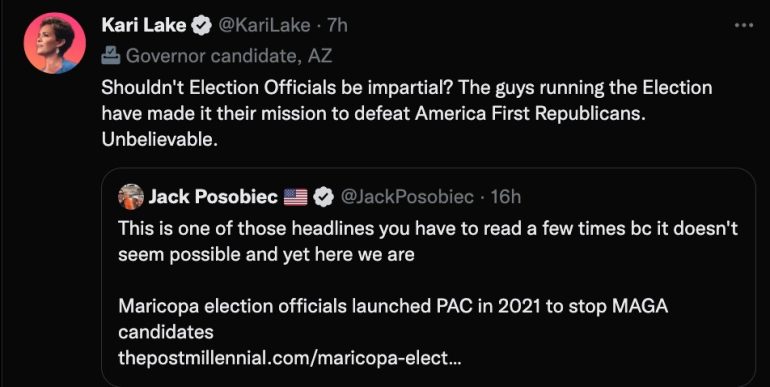 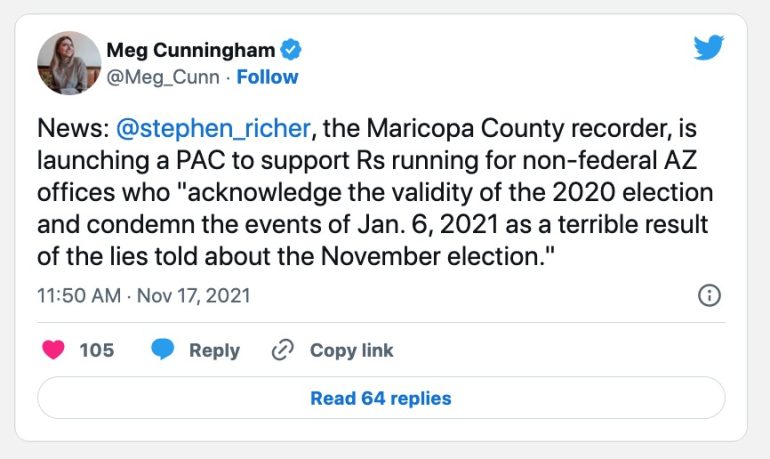 This becomes especially relevant if we consider the fact that Kari Lake was nominated by Trump, whose opinion about the 2020 elections is well-known, and she believes that there are at least some problems in the Arizona race that need fixing.

The fact that votes were still being counted a week after most of the country knew their results seems to make her complaint at least plausible.

3) Problems in the primaries that disproportionately impacted Republican candidates.

-At least 20 polling sites in Pinal County, Arizona, ran low or ran out of ballots on election day, ABC15 reported.
-The shortage comes after the county sent out incorrect ballots to 63,000 voters last month.
-Republican leaders are calling on the county’s elections director to resign.
An “unprecedented demand for in-person ballots” caused some polling locations in Pinal County, Arizona, to run out of ballots on election day Tuesday, the county said on Facebook.
County officials told ABC15 that at least 20 of the county’s 95 polling sites ran low or ran out of ballots during the election.
The Republican National Committee said the shortage, paired with other voting issues in the county, was a “comprehensive failure” and called for the resignation of the county’s election director, David Frisk.
“This is a comprehensive failure that disenfranchises Arizonans and exemplifies why Republican-led efforts for transparency at the ballot box are so important,” GOP Chairwoman Ronna McDaniel said in a statement on Twitter. “Pinal County Elections Director David Frisk should resign immediately.” –Business Insider

We can’t help but notice that this problem only seemed to hurt (ie: disenfranchise) one political party. This problem should have been a strong argument in favor of Katie Hobbs recusing herself from the Electoral process, which she expressly refused to do.

4) Election Day Issues at the polls.

According to the official talking points of the political left, long lines and excessive wait times are a means of causing voter suppression. This is their own talking point. And by their own measure, that is exactly what voters in Maricopa County experienced.

The Republican National Committee and others filed a lawsuit Tuesday evening calling for polls to stay open for three extra hours in Maricopa County.
The suit, filed just after 5 p.m., seeks an emergency ruling from a judge and alleges that problems at polling stations across the county prevented some voters from casting their ballots.
“At least 36% of all voting centers across Maricopa County have been afflicted with pervasive and systemic malfunctions of ballot tabulation devices and printers, which has burdened voters with excessive delays and long lines,” according to the lawsuit.
The suit was filed against the Maricopa County Board of Supervisors and the county recorder.
Board of Supervisors Chair Bill Gates said Monday it would take a court order to extend hours.
“The only way that this county would extend the voting hours beyond those who arrive at 7 p.m. is from a court order. Period,” he said. — MilwaukeeJournalSentinal

Why is this a big deal? Because so many Democrats have a culture that embraces early voting, while most Republicans embrace a culture of voting on Election Day.

If there are disruptions on voting day, they will disproportionately hurt the culture that favors in-person voting. This wasn’t just any county, either. It was one of the most populous ones. Here are a few voters describing their experience.

Voters still technically have until Wednesday to check if their votes were properly counted and to ‘cure’ their ballots if they were not, as ClashDaily reported: CHECK YOUR BALLOT: An Election Result Might Hinge On This!

A few social media posts are hardly definitive evidence, but in response to the ballot curing question, there were a lot of people concerned about their vote: 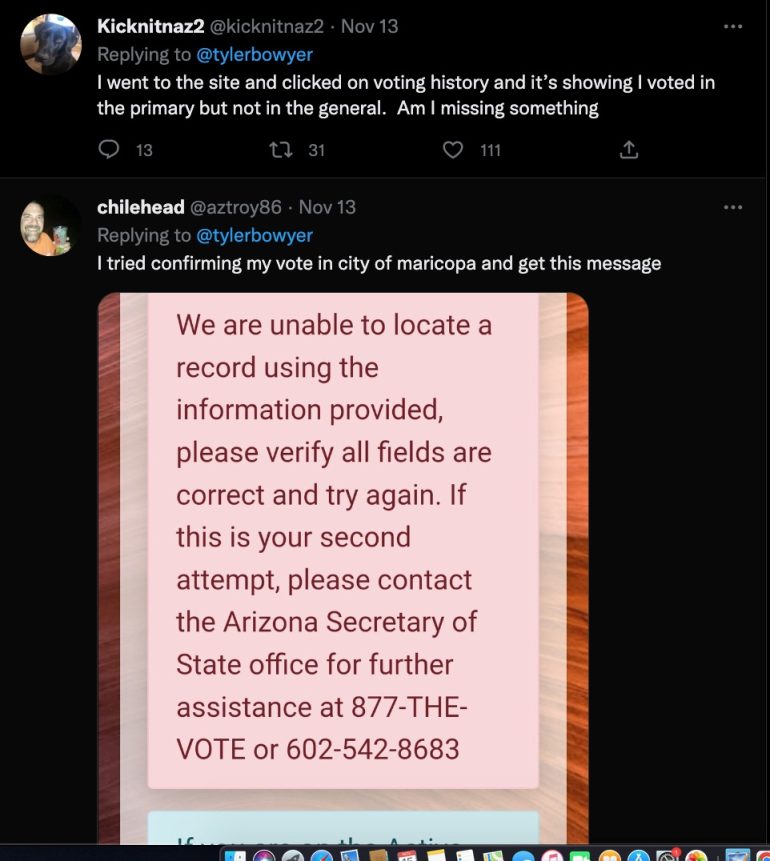 Just like the complaints in previous elections, this is not smoking-gun-level evidence. All we can do is weigh the evidence available to us with an eye to the preponderance of evidence and look for the most likely explanation.

But we do have enough in front of us to ask this question: if Katie Hobbs faced the same results, under the same circumstances, would she concede graciously? Or would she employ the Dem’s tried-and-true tactic of ‘sue-to-blue’?

Is there even a question as to how she’d react?

But we all know what kind of slanders are waiting for her if Kari Lake so much as exerts her lawful right to challenge the result, don’t we?