The city of Boston had a policy allowing groups to fly various flags with various messages on a public forum flagpole at city hall … except for this ONE group.

Here’s how the group describes themselves on their website:

The mission of Camp Constitution is to enhance understanding of our Judeo-Christian moral heritage, our American heritage of courage and ingenuity, including the genius of our United States Constitution, and the application of free enterprise, which together gave our nation an unprecedented history of growth and prosperity, making us the envy of the world. We want to motivate, inspire and activate this generation of Patriots as well as the next generation of Patriots. We want to help find, develop, and train leaders in the freedom fight. –CampConstitution

Camp Constitution decided they wanted to fly a flag that has been embraced by many denominations to represent our shared Christian faith. Here’s what it looks like: 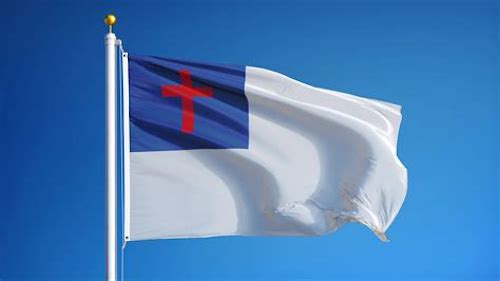 The story goes that the Christian flag dates back to an impromptu speech given by a Charles C. Overton, a Sunday school administrator at Brighton Chapel in Brooklyn, New York, on September 26, 1897. Since the guest speaker didn’t show, Overton had to step in.
While noticing the American flag near the podium, he starting talking about flags and their symbolism. The concept was born when Overton proposed that Christians should have their own flag, and it continued to stay on his mind for years to come after the speech.
Eventuallly, in 1907, Overton teamed up with Ralph Diffendorfer, an officer with the Methodist Missionary Movement, to help in creating the flag.
It’s interesting to note that the colors on the flag match those on the American flag. White represents purity and peace, blue indicates fidelity, and red stands for Christ’s blood sacrifice. –CampConstitution

Camp Constitution had their request denied. So they went to court… all the way up to the Supreme Court. And the won in a unanimous decision. They also won a payout totaling $2.1 million. You can send a lot of kids to camp with that kind of scratch.

“We are pleased that after five years of litigation and a unanimous victory at the U.S. Supreme Court, we joined with Hal Shurtleff to finally let freedom fly in Boston, the Cradle of Liberty. The Christian flag case has established significant precedent,” said Mat Staver, the founder and chairman of Liberty Counsel.
Mr. Shurtleff and Camp Constitution first asked the city in 2017 for a permit to raise the Christian flag on the “public forum” Boston City Hall flagpole to commemorate Constitution Day and Citizenship Day (Sept. 17) and the civic and cultural contributions of the Christian community to the city of Boston, the Commonwealth of Massachusetts, religious tolerance, the Rule of Law and the U.S. Constitution. — WashingtonExaminer

This may seem like a small win, but these little wins add up and build a network of precedents.