This is precisely the situation we raised red flags about when we saw how many of Biden’s Advisors had been drawn from Big Tech.

The brass at DHS now thinks it’s their job to control what information the public has access to, and newly-discovered documents show just how far they’ve gone in colluding with Big Tech to make it happen.

The Intercept is the source that broke open this story. Here’s part of what they had to say:

DHS’s mission to fight disinformation, stemming from concerns around Russian influence in the 2016 presidential election, began taking shape during the 2020 election and over efforts to shape discussions around vaccine policy during the coronavirus pandemic. Documents collected by The Intercept from a variety of sources, including current officials and publicly available reports, reveal the evolution of more active measures by DHS.
According to a draft copy of DHS’s Quadrennial Homeland Security Review, DHS’s capstone report outlining the department’s strategy and priorities in the coming years, the department plans to target “inaccurate information” on a wide range of topics, including “the origins of the COVID-19 pandemic and the efficacy of COVID-19 vaccines, racial justice, U.S. withdrawal from Afghanistan, and the nature of U.S. support to Ukraine.”
“The challenge is particularly acute in marginalized communities,” the report states, “which are often the targets of false or misleading information, such as false information on voting procedures targeting people of color.”
The inclusion of the 2021 U.S. withdrawal from Afghanistan is particularly noteworthy, given that House Republicans, should they take the majority in the midterms, have vowed to investigate. “This makes Benghazi look like a much smaller issue,” said Rep. Mike Johnson, R-La., a member of the Armed Services Committee, adding that finding answers “will be a top priority.” –The Intercept, October 31

Seeing as this interference goes back to at least 2020, this could add yet another wrinkle to that Time Magazine story about coordinated ‘fortification’ of the election by various political entites who worked together to make sure Biden won.

Here’s a taste of the role Big Tech might have played *directly* in 2020 results — and that’s besides what we already know about the coordinated suppression of the Hunter Biden story.

The extent to which the DHS initiatives affect Americans’ daily social feeds is unclear. During the 2020 election, the government flagged numerous posts as suspicious, many of which were then taken down, documents cited in the Missouri attorney general’s lawsuit disclosed. And a 2021 report by the Election Integrity Partnership at Stanford University found that of nearly 4,800 flagged items, technology platforms took action on 35 percent — either removing, labeling, or soft-blocking speech, meaning the users were only able to view content after bypassing a warning screen. The research was done “in consultation with CISA,” the Cybersecurity and Infrastructure Security Agency. —

We’re starting to see why Musk’s purchase of Twitter had so many leftists tied up in knots. At least SOME of them must have known how far down the rabbit hole this quid pro quo really went.

Remember the woman Musk fired from Twitter — the one who made the decision to nuke Trump’s account from orbit? She had monthly meetings with the government helping decide what to censor.

The left is already cranking out the ‘nothing to see here, this is normal’ narrative. But if everything was above board, why did they take steps to deliberately mislead the public about the nature of these actions to ‘avoid the appearance’ of … things that were actually happening? 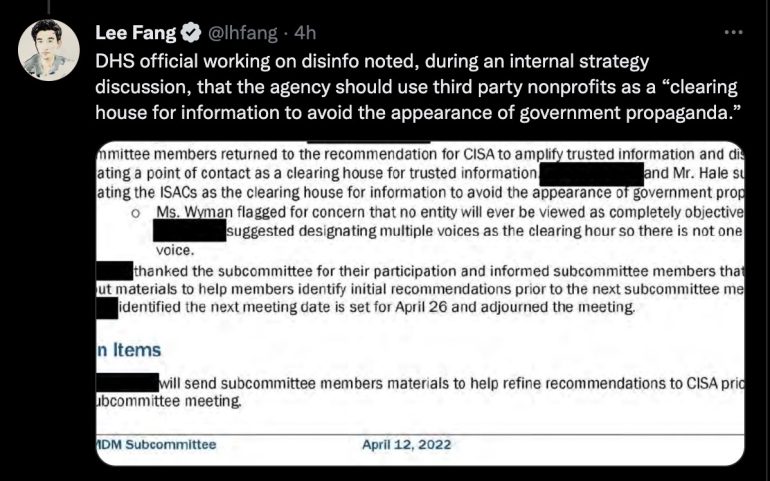 Kind of an ironic position for an effort to ‘fight disinformation’ to be taking, don’t you think? But wait, there’s more!

As if we didn’t have enough reason to distrust the honest intent of FEDERAL law enforcement, we see the FBI was playing a role. Because THEY have never once been shown to be anything other than perfectly objective and even-handed on any sensitive or political issue, right? 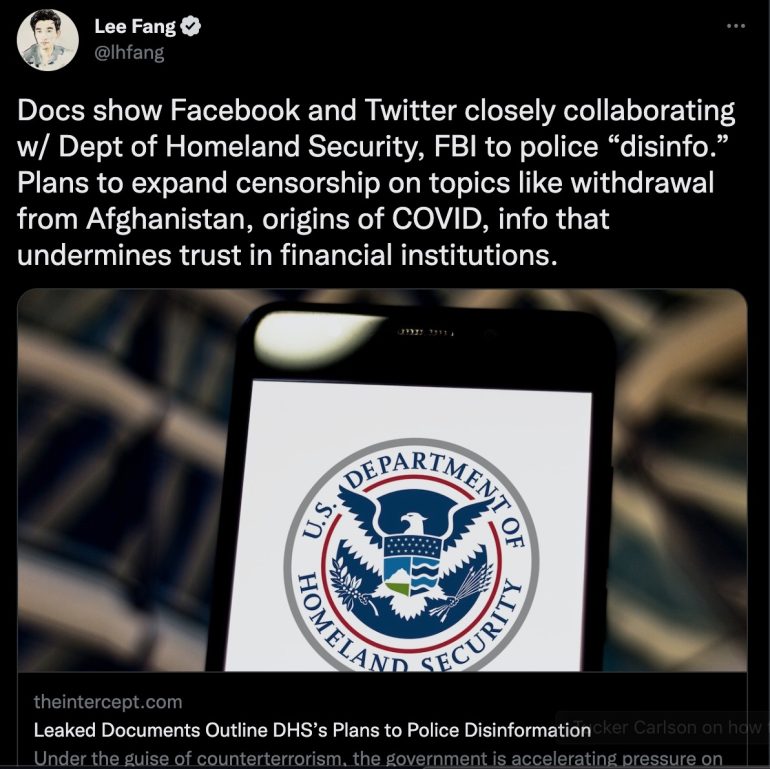 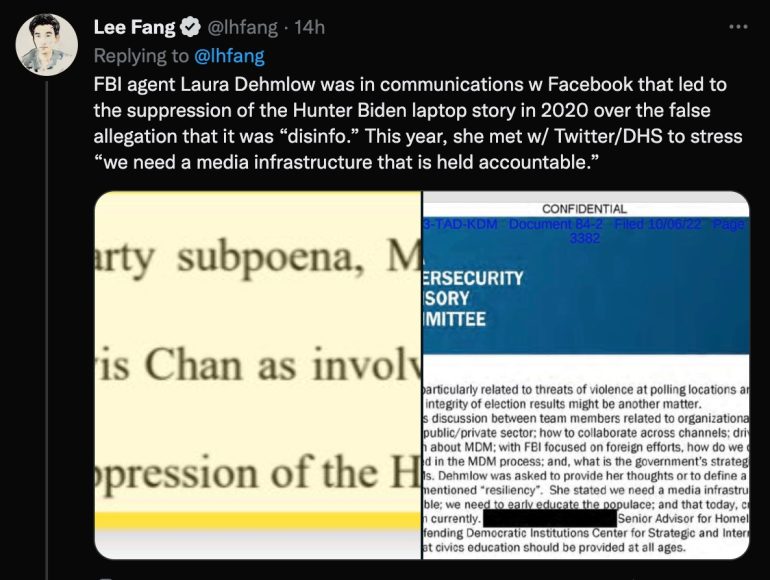 All these leftists who keep calling Trump and the Republicans ‘fascists’, should look up what words they used to describe a government that blurs distinctions between government and private companies or that controls information considered harmful to their party’s preferred narratives.