It’s amazing how quickly the most perfectly secure vote in global history can devolve into an absolute dumpster fire so quickly. A cynic might almost begin to question whether those claims of election perfection may have been a tiny bit exaggerated.

As ClashDaily reported, there were all sorts of things going wrong with in-person voting in Arizona. And the instructions voters were given by trusted election officials actually disenfranchised voters, costing them a chance to have their voices heard in this cycle’s election results.

That story HERE: The Nonsense In Maricopa County, Arizona Began At 7 AM — Voting Machines Not Working

Voter suppression is a favorite topic of the news, right? Surely they will be reporting this story with those great big ‘War Is Declared’ headlines on their front pages, right? Probably not. It’s affecting in-person voters, so the people affected most likely skew Republican. Ask yourself: when is the last time you ever heard a Republican’s election security concerns raised in the media?

What if voters are given instructions by their election officials that will not only destroy the ballot they are holding but will disqualify them from voting at another location, too?

Because that is one of the complaints being raised in the lawsuit by Harmeet Dhillon.

Of course, Twitter’s electioneering Social Media algorithm obviously hasn’t been changed to allow for unfettered speech yet, which shows you just how badly our social media needed a wrench thrown into their works. 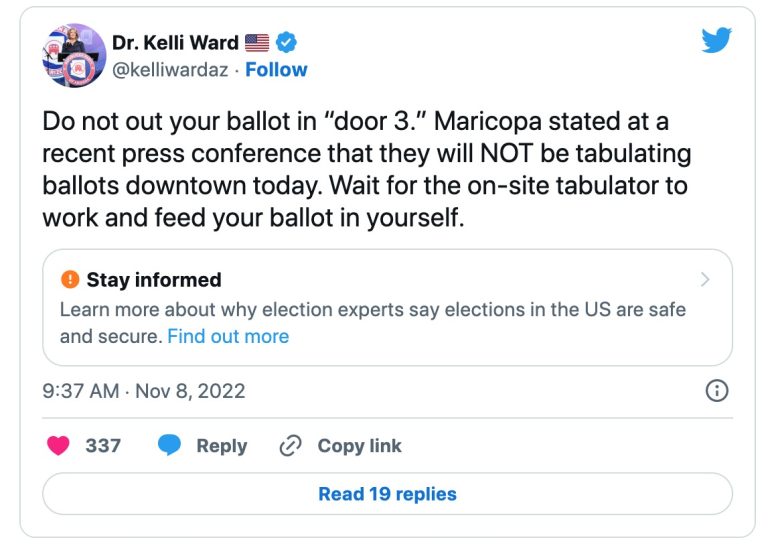 Even direct evidence of people experiencing a significant election snafu was tagged with the ‘disinformation’ filter and a handy re-education link.

But back to the lawsuit itself.

The plaintiffs included the GOP, the political committees for Blake Masters and Kari Lake, and a private citizen.

Because Arizonans are guaranteed, by law, 13 hours of in-person-voting on election day, lawyers called for poll closures to be extended beyond 7am. This was in response to problems in the morning that prevented voters from using their polls when they were scheduled to open.

There were some specific complaints made, putting specific mishandling of certain details of this elecion into the public record.

In particular, it involved voters losing their right to vote as a result of errors made and improper advice given by election officials. 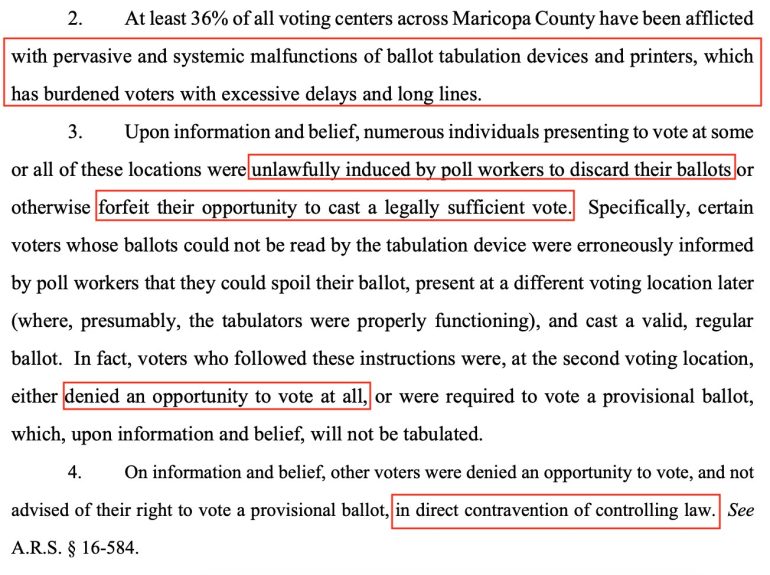 The petition was denied and polls closed at their usual times. But the issue of people given advice that cost them their ballots remains an unresolved issue.

It is a problem that will need to be sorted out before our next set of elections in ’24.