As keen observers on the right pointed out, the level of Democrat concern for a violent act is directly proportional to the political mileage they can wring out of it.

When there is a criminal act with ‘useful’ victims, such as school shootings and gun crimes, for example, Dems flock to it like a moth to a flame. Likewise, if they can connect a crime to a person, group, or movement they have marked as a political enemy, they take every opportunity to do so.

We saw, for example, the difference between how ClashDaily reported on the events of the Club Q shooting while taking care not use ‘guilt-by-association’ tactics to disparage family members who happened to be public figures, or to go beyond official police determinations about guilt or motives, Democrats and the media were tripping over themselves for ways to blame this act of violence on the political right.

Colorado Springs Night Club Shooting: What We Know … And What We Don’t

Vs. the ‘reputable’ media reporting of the same facts…

Funny how Biden trips over himself to contact the owner of the gay bar in that story, but had nothing to say about the racially-motivated murder of children and grandmothers at a Christmas parade and he can’t seem to find Moscow Idaho on a map?

An op-ed over at the Federalist came right out and said it: 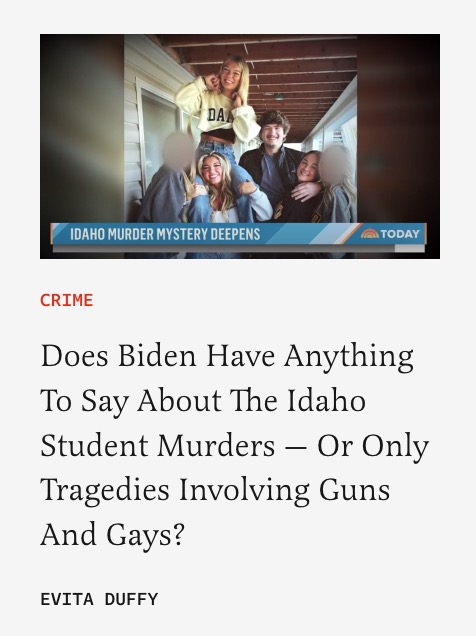 Indeed. That’s a great question for some intrepid reporter from the White House press gallery to pose to that alleged ‘President of All Americans’.

The left — including Biden himself — likes to connect responsibility for violent acts to the ‘ill-considered’ words of Republicans.

While Joe Biden didn’t join that chorus of Democrats and media talking heads blaming Republicans for the killing spree in Club Q, he was happy to connect those non-existent dots on other occasions — like that bizzare Pelosi hammer attack that still leaves us with more questions than answers.

There were plenty of others more than happy to throw that blame around at the people they hate: 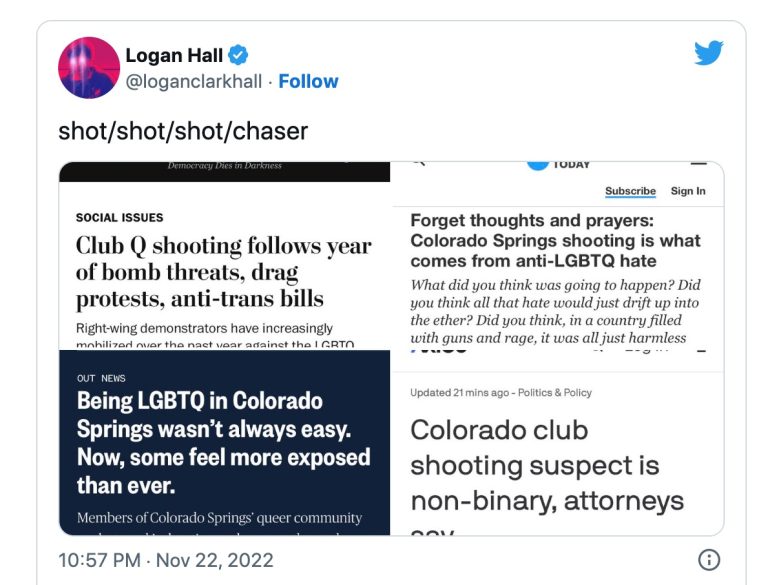 By the rules of their own logic, all of the Democrats and TV pundits blaming Republican ‘hate’ for this killing spree were active participants in the following hate crime:

The headquarters of Focus on the Family, a Christian parachurch organization, was vandalized Thursday following a mass shooting at a gay nightclub in Colorado.
The phrases “Their blood is on your hands” and “five lives taken” appeared on a sign displaying the Focus on the Family logo in an apparent attempt to link the group for the shooting which claimed the lives of five people and resulted in 25 injuries. Law enforcement officials have no information about a suspect in the act of vandalism, according to a report from the Colorado Springs Gazette.
Focus on the Family exists to share the gospel “with as many people as possible by nurturing and affirming the God-ordained institution of the family and proclaiming biblical truths worldwide,” according to the organization’s website. Club Q is an “adult-oriented gay and lesbian nightclub hosting theme nights” such as drag shows. Both organizations are located in Colorado Springs, Colorado. — DailyWire

The perpetrators were even so bold as to put out a ‘press release’ explaining the motivation of their actions.

A press release and report back from those who completed this direct action: pic.twitter.com/LszpJrTmzX 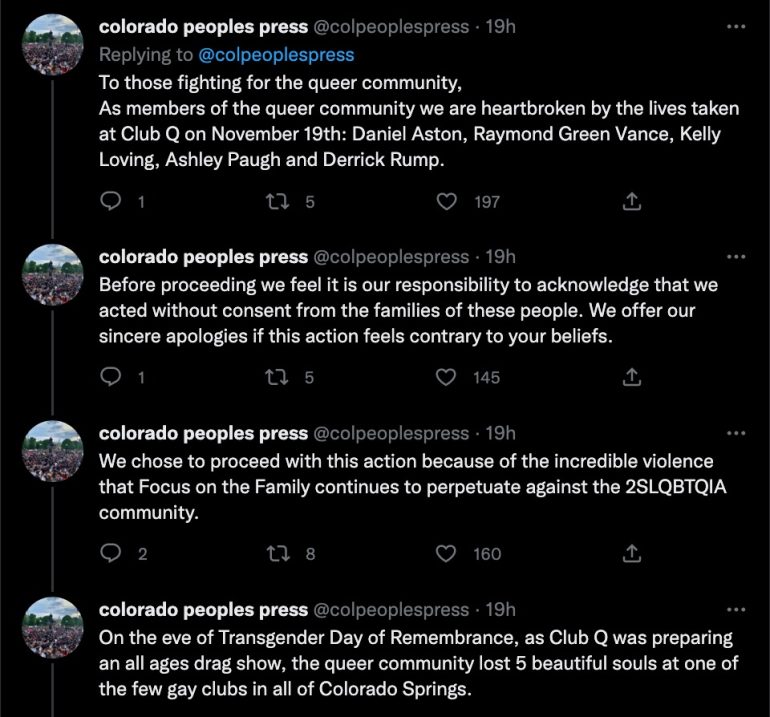 If the right is so regularly accused of being filled to bursting with hateful, violent bigots… why is it institutions associated with the political right that so often find themselves the target of angry secular bigots?

Crisis pregnancy centers that help expectant moms with counseling, baby supplies, and health care? They get firebombed or vandalized by the dozen after the Dobbs decision — with rabid left-wing activists taking credit. Don’t expect any arrests, though. They’re too busy sending SWAT teams with their guns drawn to pro-life activists with large families and clean criminal records.

We saw exactly the same dynamic play out when the state-approved hate mongers over at SPLC named the Family Research Council as a ‘hate’ group, prompting an LGBT activist with murderous intent and a duffle bag full of Chick Fil-A to bring his gun to their offices over a difference in opinion over the correct definition of marriage.

These are instances where there really IS an effort to whip people up into some kind of an emotional response against a political enemy.

Perhaps that ‘Soul of America’ isn’t as important to Joe as playing bare-knuckle politics and keeping the billionaire donors happy that their agenda is moving along on schedule.