Drag queens performing at a highly-sexualized Christmas show were captured on video performing in all their womanface glory. Some chatted with children in the audience.

The NSFW show features alumni from RuPaul’s Drag Race and has been touring for two months and will continue until the end of December. The host of the show, Nina West, has been featured on both Nickelodeon and Disney+. 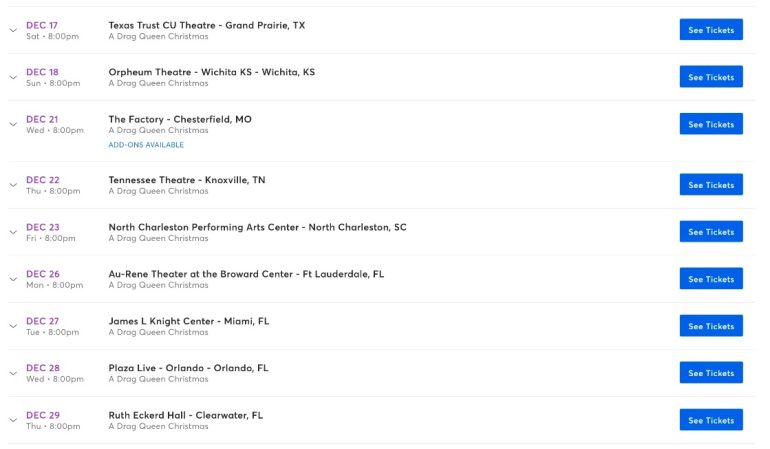 Independent journalist, Taylor Hansen, captured a number of photographs and video from the event in Austin, Texas on Wednesday.

“This is a national tour with 36 shows in 18 different states, including DC,” Hansen reported in a tweet.

His photos and video reveal that this clearly wasn’t an event that children should attend.

Hanson has covered several so-called “all ages” drag shows and said that this show was the “most sexual and inappropriate family-friendly drag show I have ever attended. From simulating sex, talking dirty to the crowd, sexualizing children’s stories, and much more.”

One video, in particular, shows just how inappropriate this show was — a drag queen wearing large fake breasts with exposed nipples asks a child in the audience, “Are you reaching for my titties? Are you hungry?”

The man caricaturing a woman then makes sexualized jokes, gets “spanked” by someone handing him money like he’s a stripper, and twerks for the audience.

This performance was part of a show on tour throughout the US. They will be performing this same show across multiple states. This was just one. Read the entire thread. It’s extremely graphic- one of the worst I’ve ever seen. https://t.co/gyDp34pSZu

Some reports and social media users are claiming that the show is geared toward adults — which the NSFW content shows it clearly is. But then why does the information on the show say “all ages welcome”? 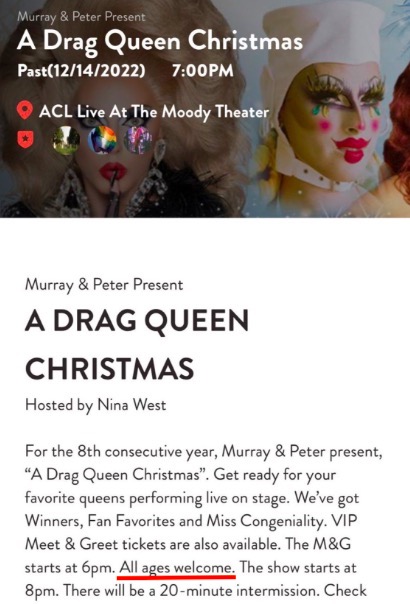 The Daily Mail reported on Thursday that armed protesters showed up outside the show in San Antonio, Texas on Tuesday and incorrectly stated in their report that the event was not billed as “all ages” which it clearly was. Repeatedly.

Armed protesters gathered outside a theatre in Texas on Tuesday to protest a Christmas themed drag show that they claimed was ‘grooming kids’ and should be restricted to ages 18 and over.
The group from This Is Texas Freedom Force (TITFF) led the demonstration that protested the show called ‘A Drag Queen Christmas’ at the Aztec Theatre in San Antonio, Texas.
The touring show features alumni from RuPaul’s Drag Race and has been on the road for two months in the lead up to Christmas. The show does not claim to be for children, nor an all-ages performance, despite the TITFF claims.

Hansen’s thread below doesn’t include all of the videos and that’s probably a good thing, but you can head over to Twitter if you desperately need to see more videos of a gay burlesque show.

This is a national tour with 36 shows in 18 different states, including DC.

There is much to go over so it will be covered in this thread ⤵️ pic.twitter.com/5mmLaJG3TY

In this performance they simulated sex countless times, sexualized a child’s story, including Santa, and had sexual videos playing in the background.

When the host asked a child what his favorite part of the show is he replied “nothing”. pic.twitter.com/rmrkCb5eJ2

“Crystal Methyd” performed with two other performers. They were all grinding and making other sexual gestures.

At the end of the performance Crystal licks his “Peppermint breasts“ and the host, Nina West, says “mmm minty fresh”. pic.twitter.com/oMCyzScxXU

This Drag queen had a lot to say to children who were on the front row who were being given money by their mother to hand to the Drag Queens.

He engaged with two different children, a 9 and 10 year old.

“Are you having fun, are you enjoying it, are you confused yet?” pic.twitter.com/KydNKlJjND

“I saw you guys with your mom in the meet and greet, where’s Melinda the mom? Melinda right? Wait tell me your name again. Sonya! We need more mothers like you in the world, thank you so much.”

The Drag queen then addressed the children of the parent. pic.twitter.com/RcEbs7v7Ib

These were the event details prior to the tour, for some reason they removed the portion where it talks about being the “naughty tour”.

Now it simply states it is an “All Ages” Drag Show. pic.twitter.com/48nnfJmbSP

Some Twitter users were posting various screenshots of the details of the show highlighting the portion that has the adult content warning… but failing to acknowledge that the description also says that it’s an “all ages” event.

One screenshot doesn’t say “all ages” but does have a mild parental advisory. 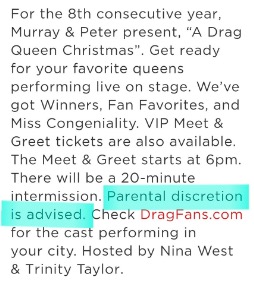 The thing is, even when the performers realized that children were present, they made no effort to dial back some of the sexualized performances. Granted, it would be difficult with the video and choreography, but not even the improvised banter was toned down. it’s like they didn’t realize that some things are not appropriate when children are present. This is precisely the criticism of the “all ages”/”family-friendly” drag events.

This report was made possible by @FamilyProjectTX

Will Nickelodeon and Disney+ disavow this grotesque show that children attended and distance themselves from Nina West?

The host of this show, Nina West, is affiliated with Disney+ AND Nickelodeon… pic.twitter.com/yW4DnKqwtJ

YouTuber Blaire White pointed out that RuPaul’s Drag Race airs on VH1 and they should be forced to disavow this show and these performers just as Disney and Nickelodeon should.

I bring this up to say, this is not a hole-in-the-wall event or entertainers off the street.

They are massively popular television and social media personalities backed by a huge mainstream network that deserves backlash for this too.

But… don’t call men who dress up as caricatures of women and gyrate in front of children for dollar bills “groomers” — that’s bad.