For years, Democrats refused to admit Antifa even existed. Now we see them being arrested as domestic terrorists. Will Kamala raise bail for these ones, too?

Five Antifa members face domestic terrorism charges in Georgia, after violently resisting attempts to remove aggressive protesters who had created an ‘autonomous zone’ called ‘Cop City’ where land was being cleared for the construction of a police training center.

Makeshift treehouses from which some of them were arrested were found to contain explosives.

Prior to Tuesday’s arrests, police detained several people at the site for crimes including destruction of property and arson along with car-jacking and attacks on locals and government officials.

Those arrested have been named as Serena Hertel, 25, of California, Nicholas Olson, 25, of Nebraska, Francis Carroll, 22, of Maine, Arieon Robinson, 22, of Wisconsin and Leonardo Vioselle, 20, of Macon, Georgia.
Earlier this week, the GBI said that protesters had begun attacking police and other emergency services workers at the scene with rocks and bottles. After officers cleared the area, they recovered bombs, flares and gasoline, authorities said.
Multiple crimes occurred on Saturday when the local fire department was called to the scene to extinguish a dumpster fire. Richard Porter told WXIA that he was set upon by the group when he attempted to pick up some scrap metal from the area.
Porter said that members of the group threw things at him including a ‘gas bomb.’ He fled, leaving his truck behind which was burned out. Porter told the channel: ‘It seemed to me like they were going to burn the truck with me in it.’
…Just as an attempt was made to remove barricades blocking entrances to the site, firefighters and police officers were attacked with rocks and incendiary weapons, Boston said. Once the area was cleared, police found explosive devices, gasoline and road flairs, the GBI said.
In an email to news outlets, opponents of the training facility said that police used ‘extreme and unjustified measures’ against them, including ‘tear gas canisters and pepper bullets.’ — DailyMail

Here are some photos to help make sense of the story. 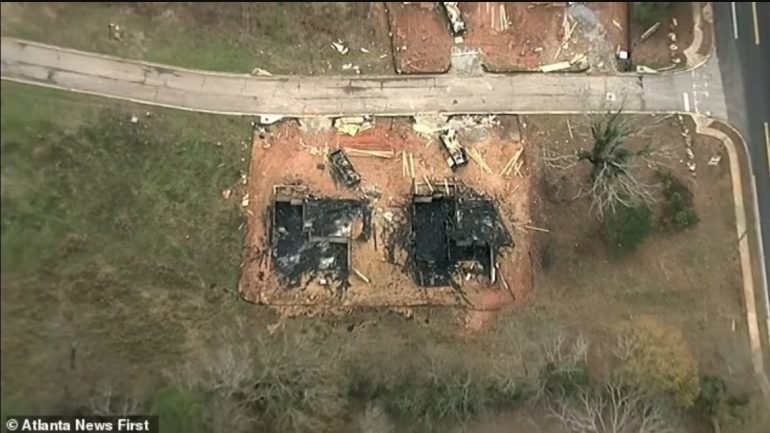 And a collage of the charming participants in the ‘direct action’. 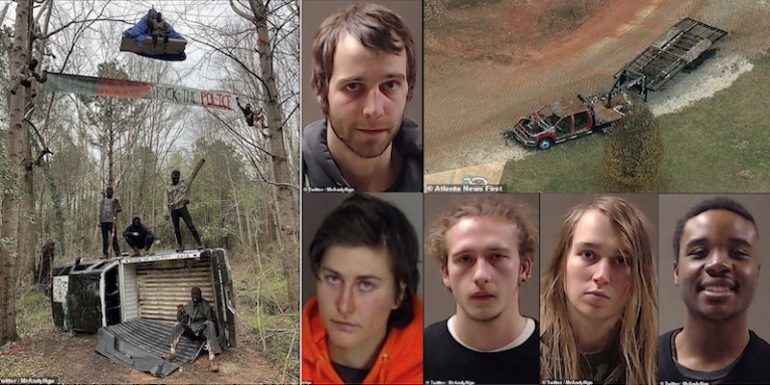 The chick in orange is a Serena Hertel, a real credit to Pitzer College. She majored in environmental analysis and math in 2020.

Remember back in 2020 when not a single Democrat could be made to admit that there was such a thing as ‘Antifa’ even AFTER we had seen places like Seattle and Portland cave to the whims of violent mobs?

One Trump supporter was shot dead by an Antifa clod: BREAKING: That ‘100% Antifa’ Killer Of Trump Supporter Now Roasting On Dante’s Easy Bake

That was just one of many examples of the left’s jackboot acts of violence or (to use the left’s preferred language of today ‘threats to democracy’). Here’s a quick walk down memory lane:

Whatever could have given such peaceful protesters such a bad reputation?

Here are three more headlines to show how seriously our government has been taking these threats.

October 2017: Dear CNN: Guess Which 2 TERROR Groups ANTIFA Has Been Working With (spoiler: “with Al Qaeda and ISIS to gather weapons and commit violence in the name of ‘Resistance’.”)

Aug 2019: Dear AOC: FBI and ICE Officials Concerned That ‘Political Discourse’ Is Making ICE Agents Targets Of Violence When AOC and her fellow travelers were pretending to think that border enforcement were more evil than the Devil himself, they took no responsiblity for ‘inciting violence’ even though AOC was often at the forefront of publicly justifying violent crime perpetrated by so-called ‘protestors’.

May 2021: Why Is Biden’s Pentagon Inviting Rabid Partisans For ‘Anti Extremism’ Consulting? What did Biden emphasize as the grave threat to democracy? Was it violent rioters that commandeer parts of a city and terrorize locals, businessess and law enforcement?

Nope. Conveniently, the threat he needs to protect us from is those damned Mega-MAGA types who use words like ‘patriot’ and ‘Constitutional Rights’ unironically.

As for the rioters that caused billions of dollars of damage in 2020’s ‘Summer of Love’? The current administration helped raise their bail money.

But we’re supposed to look to Joe and Kamala as the ‘soul of the nation’ in a ‘return to decency’.

Right. And I’ve got a bridge in Brooklyn to sell ya … for a great price.