From the time the Priary Debate where Dems raised their hands to affirm their support of free healthcare for illegal immigrants, we all knew what would happen the second Dems took back the White House.

The border would be essentially undefended, and anyone sneaking across would be welcomed with open arms.

What we did NOT forsee was how brazen the left would be about it.

As predicted, while Joe Biden rescinded one Trump-Era border policy after another, we saw the swell of humanity at our Southern Border get exponentially larger.

Our population has swelled by several million, and cartels have exploited our otherwise-occupied border patrol to take operational control of who and what comes across that border.

As US immigration policies shift, so do the tactics of those trying to exploit them. But with Joe Biden knocking down one barrier after another, he was practically rolling out the red carpet.

And with Biden’s law enforcement fighting to remove even more impediments at the border pushing for the sunseting of Title 42, cartels had masses of people queued up at the border like runners wating for the starter’s pistol to set them in motion.

Then something unexpected happened.

SCOTUS threw cold water on the policy change. Title 42 will remain in place until they’ve had a chance to hear arguments about whether it should be ended, meaning it Title 42 provisions will continue to remain in effect for a number of months, not days.

This gives us an inflection point to test competing theories about what’s really happening at the border.

The official Joe/Kamala narrative is that they inherited a helluva mess at the border. It’s basically Trump’s fault. And there is some mysterious ‘root cause’ that’s driving all of these people to rush our borders while uttering the magic get-out-of-jail-free word, ‘Asylum’.

The competing theory is that the flood of people coming in now is a direct result of perverse incentives derived directly from Biden’s Broken Border policy.

It would be argued that the border was (in some relative sense) under control during the Trump administration, those big, beautiful walls were providing an effective deterrent to people wandering in when they shouldn’t, and the several agreements Trump had worked out with other countries had done a good job of making illegal immigration attempts that DID make their way across the border more manageable than they had been at the beginning of his term.

Further evidence bolstering the second theory is the behavior of the administration and elected Democrats who are now openly pro-amnesty, and fighting with every tool in their toolbox to limit border enforcement from enforcing the border and aggressively opposing efforts of anyone — at the state or federal level — from filling gaps in that border wall.

Photos taken 24 hours apart, on either side of that SCOTUS ruling might help answer the question of which theory accurately reflects the present situation.

Here’s the before picture at one location on the border, waiting for Title 42 to be lifted.

Crowds like this one were present all along the border as people geared up for the new rules. 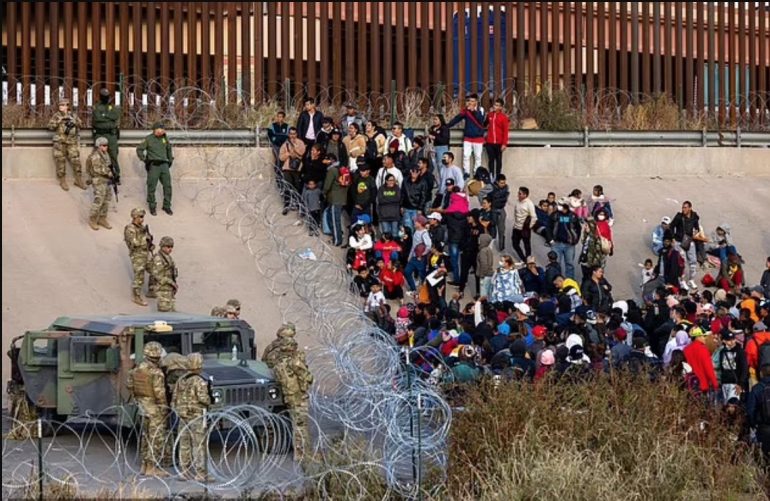 Here’s a photo of another spot on the border taken once it was clear that Title 42 would not be lifted. 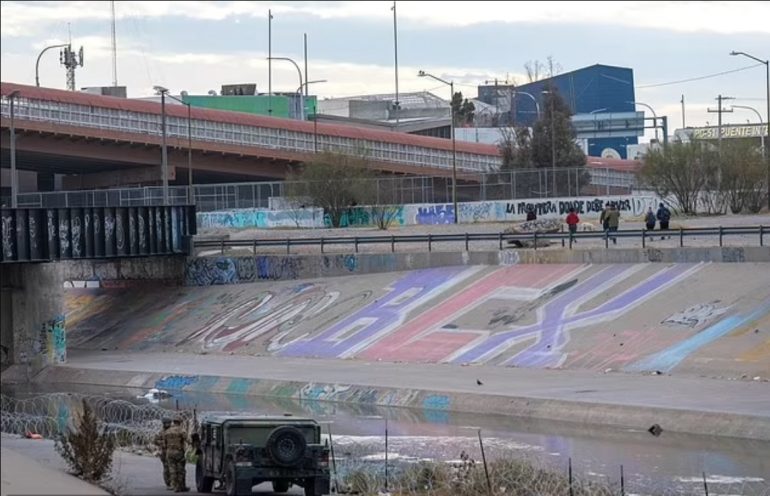 What do you notice about these two photos?

Responding to the Title 42 decision, he added: ‘It helps a lot – every little helps.’

Torres spoke at a stretch of the border near the El Paso neighborhood of Chihuahuita, where troops from the Texas National Guard have laid out around two miles of razor wire.

National Guard troops armed with assault weapons were patrolling the stretch of border in Humvees on Wednesday.

Several pockets of people were gathered on the Mexican side, apparently planning their entry, but the situation was far less chaotic than in the days and weeks before Title 42’s extension.

One photo obtained by DailyMail.com of an incident on December 20 shows a crowd of more than 100 people, including babies and young children, gathered at the razor wire as they tried to enter the US.
The crowd were in an hours-long standoff with border officials and armed National Guard troops into the night, when temperatures plunged to near-freezing, before they finally dispersed.

The exact same spot, which has been a frequent crossing point, was clear on Wednesday, 24 hours after Title 42 was extended.