Hollywood invites a certain kind of hubris where — even being caught in a mistake — celebrities will STILL insist that they were right all along.

The most heinous example of that might be the fatal shooting on the set of Rust where Alec Baldwin was looking to blame everyone and everything but himself for the death of Halyna Hutchins.

An (arguably) less egregious example was Whoopi Goldberg’s doubling down on statements she made about Jewish people.

In a new interview with The Sunday Times of London, shared during Hanukkah, Goldberg suggested Jews are divided about whether they are a race, religion or both.
“My best friend said, ‘Not for nothing is there no box on the census for the Jewish race. So that leads me to believe that we’re probably not a race,’ ” she recalled.
When The Times journalist Janice Turner mentioned racially divisive laws set by Nazis aimed at Jews, “The View” cohost insisted that the Holocaust “wasn’t originally” about “racial” or “physical” attributes.
“They were killing people they considered to be mentally defective. And then they made this decision,” she said.
Turner continued to push back, telling Goldberg, “Nazis saw Jews as a race.”
“Yes, but that’s the killer, isn’t it? The oppressor is telling you what you are. Why are you believing them? They’re Nazis. Why believe what they’re saying?” the “Till” actress responded.
Goldberg added, “It doesn’t change the fact that you could not tell a Jew on a street. You could find me. You couldn’t find them.” — USAToday

Seeing as they are a group of people who trace their ancestry back to one particular family group, one that for much of its early history had strict rules against intermarrying with cultures worshipping foreign gods, they are, like many of their regional neighbors, a people defined by race AND religion AND shared history AND (to varying degrees through history) a political identity.

Because the West has made an idol of racial identity, Whoopi is making arbitrary decisions about which non-black racial groups qualify to be considered a ‘race’ and which are merely another group to be lumped in with those contemptible white people.

Because, really, what Whoopi is saying here is that Jewish people aren’t a race because they are basically white.

We have no idea what unnamed friend she is citing, but it carries about as much credibility as, well, pretty much anything else those old biddies on The View say.

The Auschwitz Memorial didn’t lower itself to mentioning Whoopi by name in posting what seems to be a direct response to this conversation.

But for anyone confused about whether the guy responsible for the Holocaust had any doubts whether Jews were a definable racial group or not, they were able to stick a fork in the question, using his own published works. 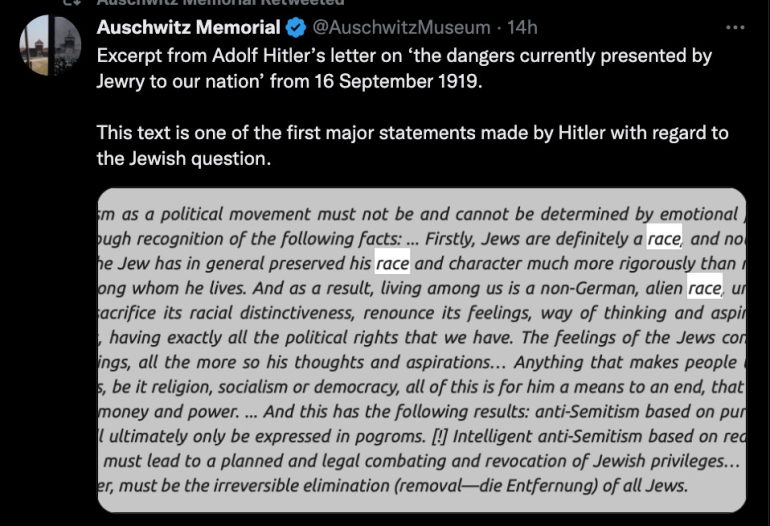 That takes us all the way back to 1919, just after Germany lost the first war, and the angry Austrian with the bad mustache has already formed an opinion on the issue.

Here’s what it says. The Memorial was even considerate enough to highlight some key words for any mouth-breathers who might have trouble seeing anything that disagrees with establishment talking points. 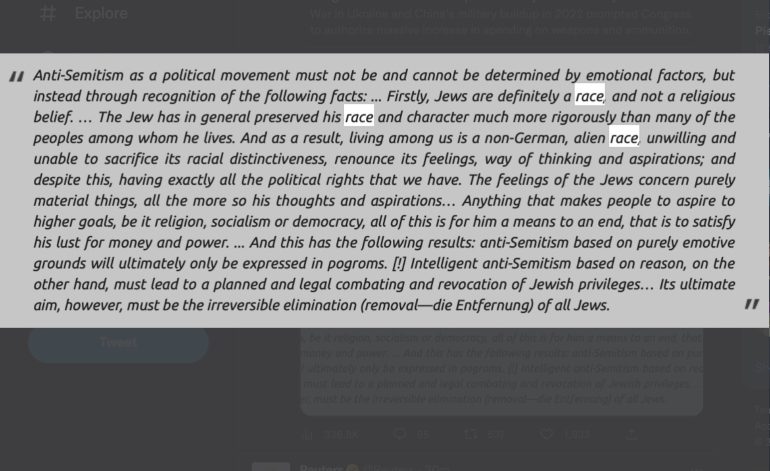 ‘Firstly Jews are definitely a race, and not a religious belief… The Jew has in general prserved his race and character much more rigorously than many of the …’

‘…irreversible elimination …of all Jews…’

Maybe Whoopi could just visit a Holocaust memorial and STFU on the topic once and for all.

What’s that line the left likes to trot out in situations like this one? Oh, right…

The world needs better role models than what you’ll see on The View. For example: