Between tax records we knew the Dems were planning to publish and the J6 Joke Committee’s recommendation to referral, Dems are wetting themselves with glee.

But not ALL Dems. Because some see this for the sham it is… and don’t want to get caught in the blast radius when it blows up in their faces.

Senate Democrats are not receiving it with the same zeal as other Dems (including journos), because they don’t share Nancy’s sanguine confidence that their #Resistance has finally ‘got him’ where they want him.

Maybe they’ve taken notice of the fact that Trump has a long history of outliving his pallbearers, and aren’t quite ready to stick a fork in him until they know for certain that he’s actually ‘done’.

For one thing, a constitutional lawyer the lawless Dems actually permitted to speak as a witness in the first impeachment trial called out the J6 Committee Referral as Unconstitutional. It wasn’t even based on the problems with it having excluded Minority appointees.

He gives two very good reasons the ‘Defenders Of Democracy’ cannot make any such referrals. One — it openly defies the scope of lawful powers granted to particular branches.

The other problem with their referral is that they are specifically forbidden to do what they did. It’s called a ‘bill of attainder’. And the Constitutional rules guiding the one exception for how such a bill against a named individual can be given have not been followed. Turley explains (emphasis added for clarity):

Prior to America’s independence, the British parliament enacted such bills that prosecuted named individuals. Our Constitution prohibited Congress from prosecuting named individuals. The power of Congress is limited to passing laws of general application that can be applied to specific individuals only by the justice department and a grand jury. A congressional committee officially voting to refer a named individual for prosecution violates the spirit of the explicit prohibition against congressional bills of attainder.
There is one possible exception to this separation of powers limitation on naming individuals. Section 5 of the 14th Amendment gives Congress the power “to enforce, by appropriate legislation” the provisions of that amendment, which include the disqualification from holding federal office anyone who “has engaged in insurrection or rebellion” against the United States or “given aid or comfort to the enemies thereof.” Section 3 gives it the power to “remove such disability” by a two-thirds vote of each house. This is a very limited power intended to apply to southern rebels during the Civil War, as evidenced by the specific reference to “the loss or emancipation of any slave” in section 5. But, even if it were deemed applicable to the events of Jan. 6, 2021, the recent referral was not made pursuant to that amendment. Indeed, it was not made pursuant to any provision of the Constitution, because there is none that would authorize it.
The Justice Department will politely accept the referral and then place it in a file that is round and sits on the floor. A special prosecutor has already been appointed and is conducting a thorough and hopefully objective investigation. The Justice Department really doesn’t need a referral from Congress, nor should it pay any attention to it. –NewsWeek

What J6 Conveniently Left Out…

Rep. Bennie Thompson, Liz Cheney, Schiff, Kinsinger and all the rest were as careful in what they left out of their report as they were in what they included. We knew it would be this way from the very beginning when the audio of Trump’s speech that day mentioned calls to action, but conveniently cut out the phrase ‘peacefully and patriotically’ from evidence.

Such dishonesty was seen again in the falsified text messages used as evidence (for which they offered a retraction), and again in the highly-publicized hearsay story about Trump in the limo ‘attacking’ a Secret Service agent and grabbing at the wheel — while refusing to take the testimony of the actual agents who called BS on the story.

Schiff has a long history of over-promising and under-delivering on information that will implicate his enemies (especially Trump) in wrong-doing. It would be kinder to him than his track record deserves to suggest he readily ‘shades the truth’ to fit his own political agenda.

Fortunately, the same Republicans that Pelosi kept from joining as the minority voice on this committee did some investigating on their own.

It’s probably worth running a story dedicated to their work and findings. But here is the summary they came back with.

Their report is 141 pages long. And it opens like this: 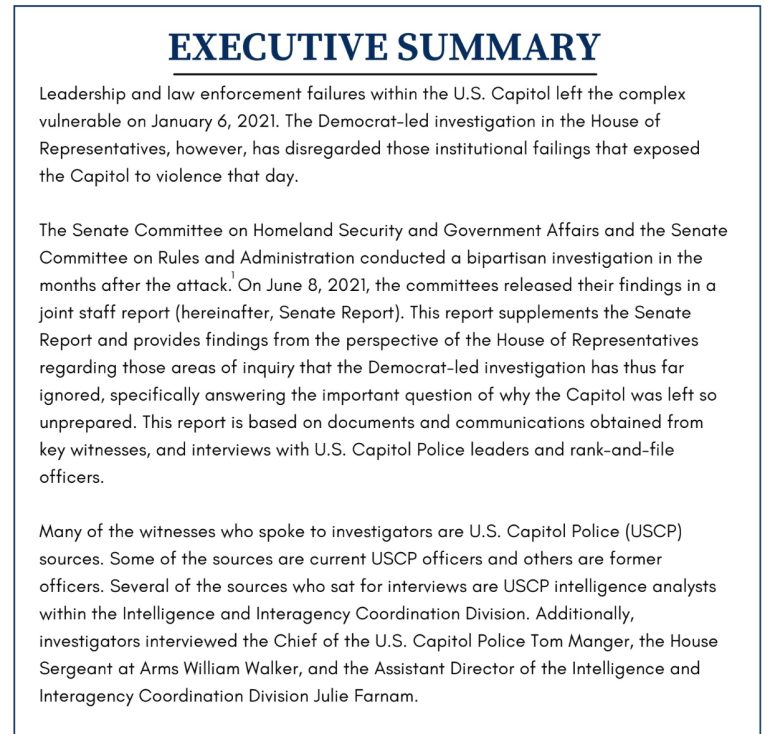 Opening lines of the Executive summary mention a shift in posture by Julie Farnam’s approach to handling threat assessments, that led directly to he siloing of key information the Capitol Police would have needed to prepare for ‘hardening’ their defenses.

What Nancy Pelosi and her J6 flunkies absolutely do NOT want you to see would probably include this summary page (overlap included to show continuity).

As you read this list ask which questions a genuinely fair inquiry would take an interest in answering, and why the other inquiry left it out of their findings. 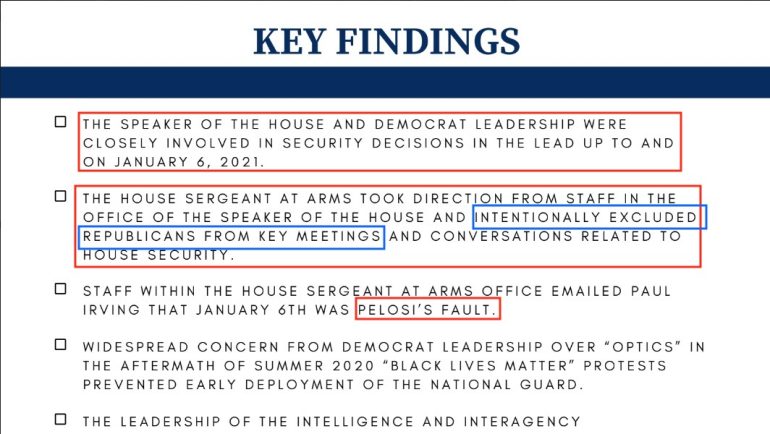 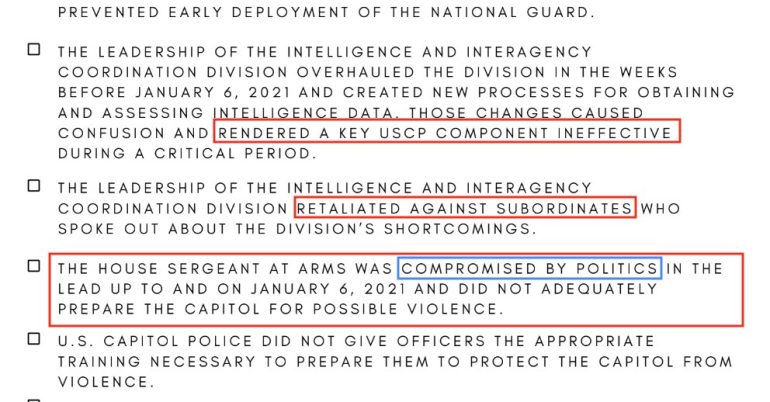 Fortunately, we’re only a week or two away from the gavel changing hands so our elected officials can offer some ACTUAL Congressional oversight. On the House side, at least.

And then we can provide the evidence that will reduce to ashes any claims these clods have of being ‘Defenders of Democracy’.