A suspect in the brutal murders of four University of Idaho students was apprehended on December 30, 2022.

Bryan Christopher Kohberger, 28, was arrested in Monroe County, Pennsylvania, in the Pocono Mountains region for the four murders. The suspect is a graduate student seeking his Ph.D. within the Department of Criminal Justice and Criminology at Washington State University’s Pullman campus, which is just a 15-minute drive from the home where the students were killed.

It is still unclear if Kohberger knew any of the four victims or why police suspect him. He does drive a white Hyundai Elantra which police had been looking for in connection with the murders.

WPVI, the ABC News affiliate in Philadelphia, was the first to confirm that Kohberger was the suspect arrested.

On November 13, three roommates, Kaylee Goncalves, 21, Madison Mogen, 21, and Xana Kernodle, 20, were stabbed to death in Moscow, Idaho, along with Xana’s boyfriend, Ethan Chapin, 20, who was also killed in the massacre.

The case had puzzled lawmakers for weeks and the brutality of the murders shook the community.

The Daily Mail reports that Khoberger was arrested “after a SWAT team swooped in Scranton, Pennsylvania, at around 3am this morning.”

“A white Hyundai Elantra – the same make and model of car being sought by cops in connection to the killing – is said to have been towed from outside Kohberger’s home,” says the Daily Mail report.

More from the Daily Mail:

Friday’s sensational arrest is the first major break in the case – with Kohberger asking if ‘anyone else was arrested’ when he was taken into custody.
Police are now searching Kohberger’s apartment in Washington – 10 miles from the crime scene – arriving at around 7.30am to cordon off the area.
Kohberger is being held for extradition in a criminal homicide investigation, based on an active arrest warrant for first-degree murder issued by the Moscow Police Department and Latah County Prosecutor’s Office.
Sources say that authorities knew who they were looking for and hunted the suspect down to Pennsylvania in the Pocono Mountains – more than 2,400 miles from Idaho.
NewsNation reported that Kohberger had a quiet, blank stare’ when arrested by local cops and the FBI on Friday morning.
Source: Daily Mail

In a separate article, the Daily Mail reports that the suspect had published a survey on Reddit to research how “emotions and psychological traits influence decision-making when committing a crime.”

“Five months before four Idaho students were found brutally murdered in their shared home, suspect Bryan Kohberger appealed on Reddit to criminals to complete his survey about how they selected their targets and carried out offenses,” reports the Daily Mail. 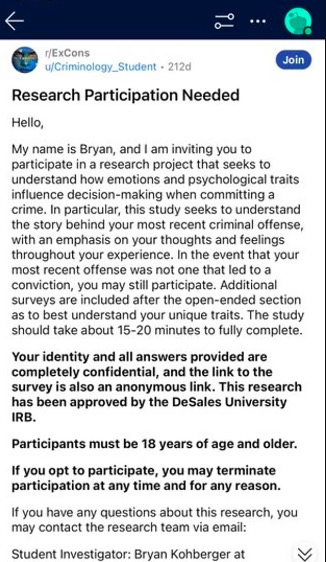 For someone studying criminology, this all seems pretty normal, but it’s incredibly creepy now that he has been arrested for a quadruple murder.

Now we wait for justice to be done and pray that this arrest gives some peace to the devastated families of his victims.