Democrats gloated when an Arizona judge dismissed Lake’s case, but we’re not done yet. This is the relevant testimony our ‘mainstream’ media ISN’T telling you about.

The criteria the judge had required for her case include evidence that provide ‘clear and convincing evidence of misconduct in violation’ of election law.

He ruled that requirement had not been satisfied.

Kari Lake has promised to appeal it:

A number of observers think she’s standing on solid ground to do so:

You don't change ballot sizes in the middle of an election without official authorization. That is prima facie evidence of malfeasance, and frankly, it does not matter if it was "intentional." It should be criminal negligence. These trials are setting BAD standards for elections.

Not the primary issue, but certainly a relevant one, were complaints that the judge’s ruling seemed to have been ghost-written. That could be hard to prove, but since it’s part of the conversation, we’ll include it for our readers’ consideration.

Maricopa County Superior Court Judge Peter Thompson only gave her two days for a trial and issued his ruling immediately afterwards, even though he could have taken several days, and it was one of the biggest, most important cases in the country. Legal experts believe his decision was ghostwritten, they suspect top left-wing attorneys like Marc Elias emailed him what to say.
The standard should have been whether voters were disenfranchised, not all the additional hoops Thompson added. If inner city blacks had been disenfranchised, Thompson would not have added all those extra requirements, he would have made the law fit. Robert Gouveia, a rare attorney who isn’t afraid to speak up and who describes himself as watching prosecutors, judges and politicians, said the standard should have been whether there was voter suppression.
Instead, Thompson said Lake had to show an extremely vague, high bar in order to prevail, that an election official intentionally caused the printer changes in order to change the results of the election, and that it did affect the outcome. He explained away many of the disturbing election anomalies as accidents or mere coincidences. He ignored the vast majority of them; in a show of arrogance, his opinion was less than eight pages long. –TownHall Rachel Alexander

More to the point is actual testimony of malfeasance that came up during the hearings.

I think we now understand perfectly why nobody wanted this election contest to go to trial. 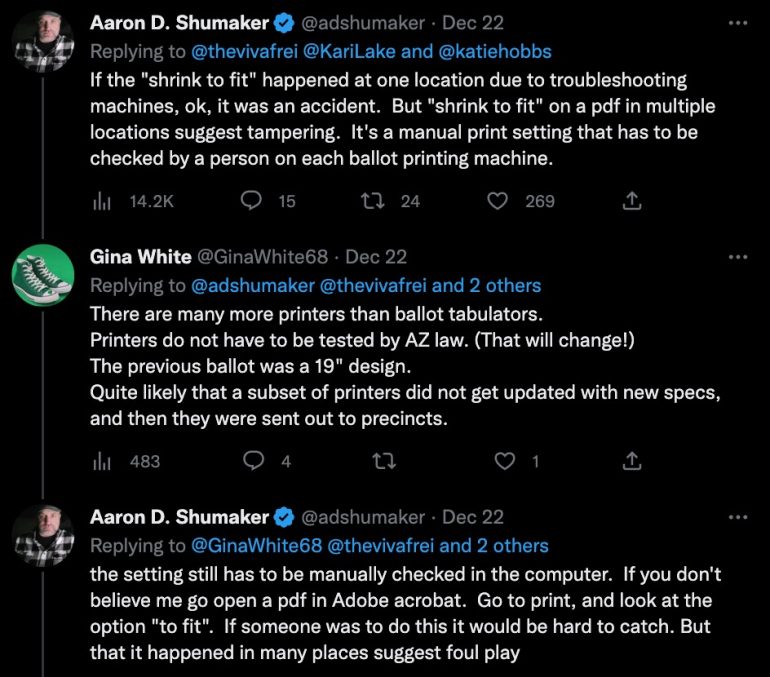 Interesting that it contradicts testimony given the previous day.

Here’s video with both sections of his testimony… and footage of Scott Jarrett running away from reporters on his way to the car when he was done.

Damning evidence of perjury and cover-up by Scott Jarrett at @KariLake trial against Arizona election fraud. Tip of the iceberg…add in chain of custody & vote-by-mail fraud and it’s over for the Democrats! They can’t win without cheating! #KariWon@RealAmVoice @ConradsonJordan pic.twitter.com/RGdqcVKb7c