If ever there was a time Kanye might want to reach for mental illness as a defense for the crazy things he’s spouting … TODAY is that day.

As one observer on social media noted, you’ve really got to be bat***t crazy to make Alex Jones uncomfortable. As we all know, Alex Jones has built a career around making outlandish and indefensible statements… some of which are eventually proven true, while others come back to bite him in the tuchus.

There are some lines even Jones would have the good sense not to cross. But today, while being interviewed on Infowars, Kanye West just ‘Leroy Jenkins’-ed right through those lines.

Here’s a summary just to get us started…

"We gotta stop dissing the Nazis all the time"

"I see good things about Hitler, also. … Every human being has value that they brought to the table, especially Hitler."

I can’t honestly say I had ‘black billionaire rapper coming to the defense of Hitler and the Nazis’ on my bingo card for 2022. But wait! There’s more!

We haven’t even gotten to the part about what he wore on the set.

We don't know that was Ye that said those things, that was said by this unidentifiable masked man, pic.twitter.com/KfsLKFBhqY

There’s so much going on in that photo, it’s hard to know where to begin.

Let’s move on to the direct quotes…

This clip began with Jones standing up for Kanye’s right to voice his views without people going straight to the tired old tropes of comparing him to Hitler and Nazis. Fair enough. We would all like that courtesy extended to us, especially in a world where that is the left’s knee-jerk response to anything we say that they don’t like.

To Jones’ absolute horror, instead of taking that as an opportunity to distance himself from Hitler and the Nazis, Kanye [or ‘Ye’ as he now calls himself] went a whole other direction.

He took a couple of ideas about the mercy of God — and especially the ability of Christians to offer the good news of repentance to even the most hardened sinner — and chucked them into a big blender with some absolutely horrifying ideas about the ‘good things’ that can be said in ‘defense’ of Nazi Germany.

Predictably, the mixture produced pure ideological poison that Nazis and Christians would BOTH have rejected, for very different reasons. Here is West rejecting the lifeline Alex threw him.

It’s astonishing when you think about it, that Kanye West just rushed to the defense of one of the few figures in history that right and left can completely agree was a moral monster whose best contribution to history was in showing the danger of unchecked power and the depths to which supposedly ordinary men in an ordinary and cultured society can sink to when consumed by bad ideas.

This clip goes a little longer than the first one, and talks about other things we’re not allowed to talk about, including black people who were in North America before the pilgrims who were ‘Native Americans’.

You’ll notice that Jones redirects the conversation when Ye tries to jump in and say that Hitler was ‘born Christian’ — quote: ‘actually I’ve studied some of the history on it’ — and pivots back to the story he was trying to tell about his grandfather.

Ye just said this on Alex Jones. Even Alex was uncomfortable. As were probably most watchers.

What do you think? pic.twitter.com/RPKbEnwAfN

Then Ye doubled down on his rant about bankers and zionists by bringing up his ‘favorite part’ about the interview he stormed out of with Tim Pool — the part when he called out Obama and Trump for both having ‘Zionist’ advisors… then Ye kicked it over to Fuentes to unpack exactly what he meant.

Grab your tinfoil hat for this one…

This was the follow up to that clip. pic.twitter.com/XXaa0TJ6V8

The show is several hours long, and judging by online chatter, it keeps getting weirder as it goes on. No, really:

What are we to make of all the insanity on this appearance?

For one thing, this public meltdown is not trivial, because if he does go down some kind of a weird rabbit hole, chances are he’s bringing others with him…

Option 1: He’s fallen in with a cult…

Some of Kanye’s ranting bears a resemblance to and has almost a Black Hebrew Israelite vibe to it… if so, that would explain some of the animosity to Jewish people (seen by that cult as being pretenders to any claim of being Jews, as the name would imlpy).

If that’s at the root of this, the craziness can literally be explained as cultic behavior.

This option works for any other set of corrupted ideas that he has been talked into adopting, whether their origins are pseudo-religious, political, philisophical or rooted in any other framework.

Option 2: This is an elaborate publicity stunt for … something

If that was the plan? Mission accomplished.

He has just accomplished exactly that… the entire world has stopped their regular routines to figure out what in the Hell has happened to Kanye. Admittedly, it’s hard to imagine any kind of announcement whose value would actually outweigh the brand damage that was sure to follow a stunt like this one.

The only theory I’ve seen that could even begin to make rational sense of his rants is that he is stress-testing free speech to see what real boundaries define that which cannot be said.

Option 3: Lashing out at perceived persecutors

Some of the complaints he has brought up make reference to times he has been screwed over in business/music deals.

He has been kicked in the head with a series of setbacks in recent years, both personal and professional. This could be an emotional reponse to the various stressors he has been under. 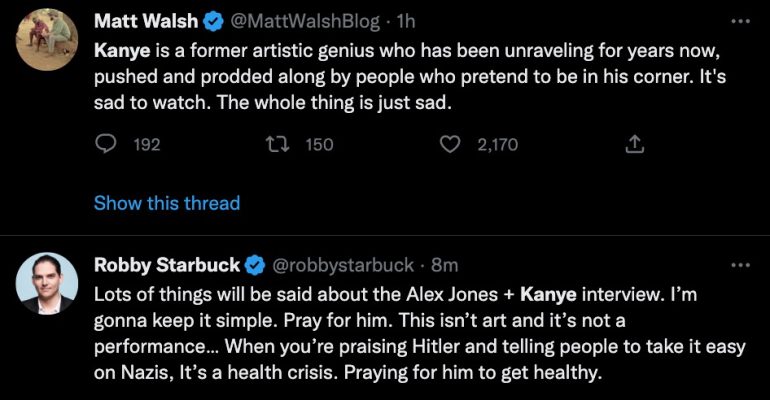 Praying for Kanye seems to be particularly good advice, under the circumstances.

What he really needs right now is a genuine friend. But everyone else will be looking at the implications of the insanity that just unfolded and what consequence it will have for themselves.

The right will be putting as much distance as they possibly can between themselves and Kanye for obvious guilt-by-association damage control reasons.

The Left will proceed to use every conceivable tool they can think of to use this event to maximum political advantage. On one hand, they will try to tattoo Kanye’s name on every Republican forehead, most likely using a photo of the time he was wearing the MAGA hat in every reference to him. (FYI — That is Standard Operating Procedure for their smear campaigns.)

On the other hand, they will use this interview as a pretext to demand far stricter controls on internet speech to protect us all from anyone ever going rogue like this again.

All the more reason for us to remind the world about it.

The best thing Kanye West could do for himself is step back from the public spotlight, drop into relative obscurity for a year or two and get his head on straight.

He could start by sorting out his screwball theology by reading something anchored in eternal truths that has some very practical and actionable elements to it. Something like this: