This guy has got to be the least self-aware person in all of Canada.

Prime Minister Trudeau, who essentially used a war measures act to shut down a peaceful protest by truckers against government overreach during the pandemic… oh, sorry, I mean the Bouncy Castle Insurrection of 2022, is out there yet again warning about the threat of “authoritarian regimes.”

The guy had people’s bank accounts frozen for donating a few bucks to truckers protesting the cross-border COVID-19 vaccine mandate imposed on “essential workers”… which his government later lifted. (Although the Biden administration just bizarrely extended the U.S. jab mandate until April 10, 2023.)

So, who does he think he’s talking about? Himself?

Trudeau: "The world today is facing a lot of uncertainty, with the rise of authoritarian leaders causing global instability…" pic.twitter.com/XlIUHNJHQp

To the Lefty Libs like Trudeau and Biden, it isn’t authoritarianism if it’s “for your own good”… which really means for their good either politically or financially.

It’s also not authoritarianism if it benefits the great, big globalist blob that also happens to benefit them financially as well as give the elites increased power and influence to shape the world (and transfer wealth) as they see fit no matter what the plebs think about it.

Speaking of the big, globalist blob…

Earlier this week, a video of Trudeau’s Deputy Prime Minister Chrystia Freeland was spreading like wildfire on Canadian right-wing Twitter.

Freeland, who wears multiple hats as Deputy PM, Finance Minister, and member of the World Economic Forum’s Board, was grilled over an item proposed in her budget — $2 billion allocated (and more to follow) for shares in a “Green transition” company that does not yet exist.

Watch Chrystia Freeland get busted for skimming $2 Billion of tax payers money to invest in a company that doesn't even exist. One can only speculate which of her friends the funds were for?
Thankfully this Senator very clearly demonstrates how BS doesn't always baffle brains. pic.twitter.com/AnwJj8RScN

Dumping billions into the “green transition” slush fund that doesn’t even exist yet, killing off Canada’s oil and gas sector, and making life unbearably expensive for Canadians with reckless spending and ramping up a tax on carbon to appease Mother Gaia is peak Trudeau… who may or may not be the son of not-dead-enough Communist Dictator Fidel Castro.

Joe Rogan on the rumors that Justin Trudeau is the son of Fidel Castro:

"That is wild. Hey bro, you need a 23andMe, right away sir. It's wild how close he looks. If it's not his dad, boy if I was the father I'd be f—ing suspicious as shit." pic.twitter.com/BAUTfD49t0

Trudeau’s mom was known for being… what’s the technical term?… a huge slut back in the day. Castro wasn’t a slouch himself having reportedly knocked boots with 35,000 women. Trudeau’s swinger parents, Margaret and Pierre, were big fans of Castro and went to visit him on a couple of occasions.

The licentious young woman married to the equally libidinous live-action twin of Mr. Burns had an open marriage before it was cool.

Margaret had a thing for rock stars (Google: Margaret Trudeau and the Rolling Stones) and it would seem at least one man in uniform could turn her head… Fidel Castro. She said of her first impression of Castro, “I was immediately mesmerized by what I saw: a tall man in green army fatigues immaculately cut and pressed, with incredibly beautiful eyes, and a wild, almost fanatical look, that made him physically very attractive.” 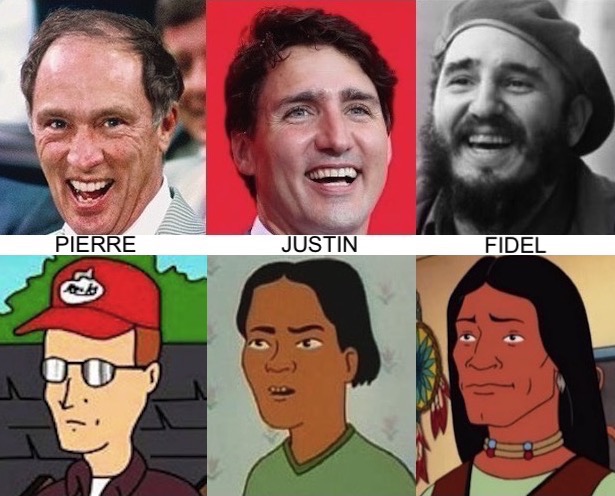 If you know, you know.

But enough about unconfirmed conspiracy theories about Trudeau’s paternity…

The fact is, Justin Trudeau is an authoritarian.

Either way, he’s still following in his father’s footsteps — Pierre Trudeau was the last to invoke the War Measures Act to quell a separatist rebellion in Quebec in the 1970s before Justin invoked the revamped “Emergencies Act” against the truckers.

And the guy has the unmitigated gall to talk about “authoritarianism” that is destabilizing the globe and causing inflation.

Here’s the Presser from the latest “Three Amigos” Summit in Mexico: