If you don’t know the name Marc Elias, you probably should. He’s a recurring villain in all kinds legal machinations connected to the Clinton machine.

Crossfire Hurricane? He was a key player in getting that project off the ground by commissioning the infamous (and illegitimate) Steele Dossier.

Systematic court filings making a series of dubious voting changes across multiple states leading up to the 2020 elections — bypassing state legislatures which, constitutionally, have the final say about such matters? He was in the thick of that.

He even found himself on the board of BLM in 2022.

More recently, he’s been trying to overturn voter id laws ‘for some reason’.

That history tells us two things about him. First, the kind of (at minimum) ‘grey-area’ politics he’s more than happy to muck around in. Second, he carries significant influence among the Democrat movers and shakers.

We all saw Democrats rubbing their hands with glee over the Mar-A-Lago raid, trotting out the same retread ‘walls are closing in’ talking points they had been throwing at him since Comey abused his position of trust to shiv him in the back.

And then, the wheels fell off that bus in the first week of November. That’s when the first of Joe Biden’s classified documents showed up.

From this point forward, any decision made about Trump’s case could invoke allegations of unequal treatment under the law, which was a sentiment already looming large in the public perception.

Note: it was some time AFTER this discovery of Biden-connected classified materials that we heard an announcement of the special counsel looking into the Trump case. No similar announcement was made about Biden at this time.

Someone found a Mark Elias from August (since deleted) that indicates the real reason he was super-excited about the MAL raid. Was it because he cared deeply about justice in this isue?

Don’t be ridiculous. He’s a Clintonite. He saw a way to exploit it for political advantage. Pay special attention to the highlighted portion of the tweet. 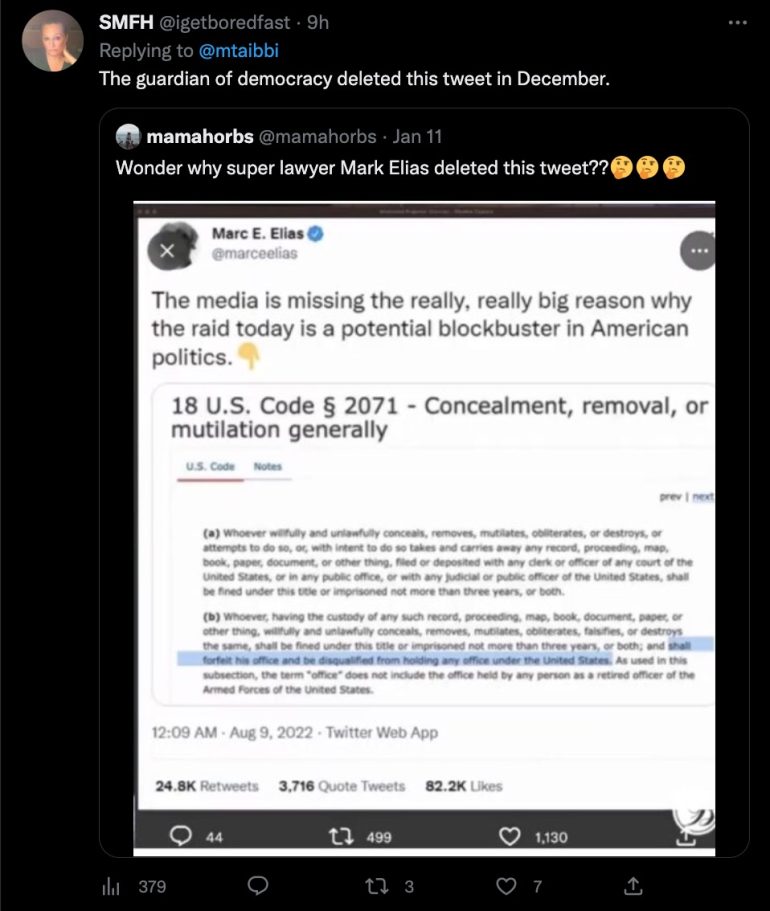 It’s a ‘Blockbuster’ in politics because…

If convicted, Trump could be disqualified from running for President again. You might almost believe that’s been the real goal all along.

But hold on, it’s been deleted now. Why is that?

Let’s take a closer look at the law Elias has been citing. Why would a political muckraker and knife-fighter like him be so very interested in that law … only to delete it?

Despite all of the framing by Biden’s loyalist media, the question of intent has no relevance to this statute.

You are either in compliance with the possession requirements of this statute or you are not. Non-compliance is a breach of the law, and it comes with a clear consequence that Elias himself underlined. 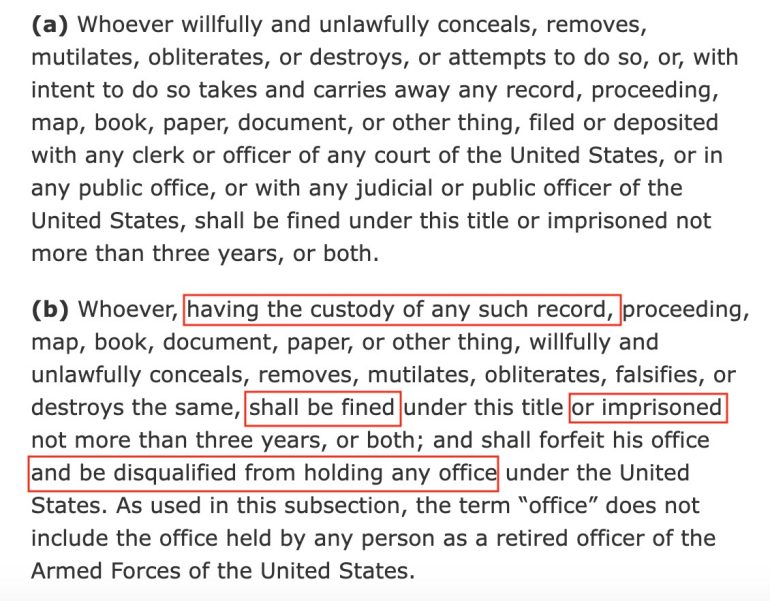 We will likely learn that Democrat operatives have been reverse-engineering the ousting of Donald Trump by working backward from statutes that could disqualify him from office. In that light, the entire Mar-A-Lago fiasco makes sense as just another chapter of the drama that has been playing out since Crossfire Hurricane and the Steele Dossier.

Unfortunately for Marc Elias, Trump has a plausible defense in this case: he had lawful authority to declassify documents. Joe Biden, it has been argued, had no such lawful authority at the time those documents would have been removed.

The trap they built for Trump could potentially snap shut on Joe Biden.