She also became somewhat of a recluse due to the preference of her ultra-private husband, Wissam Al Mana.

The last few photos of the star and her husband walking in London. She was 6 months pregnant at the time, and made headlines because of the shocking change in her clothing choices. She had on no makeup and was wearing loose, dark clothing with her hair covered: 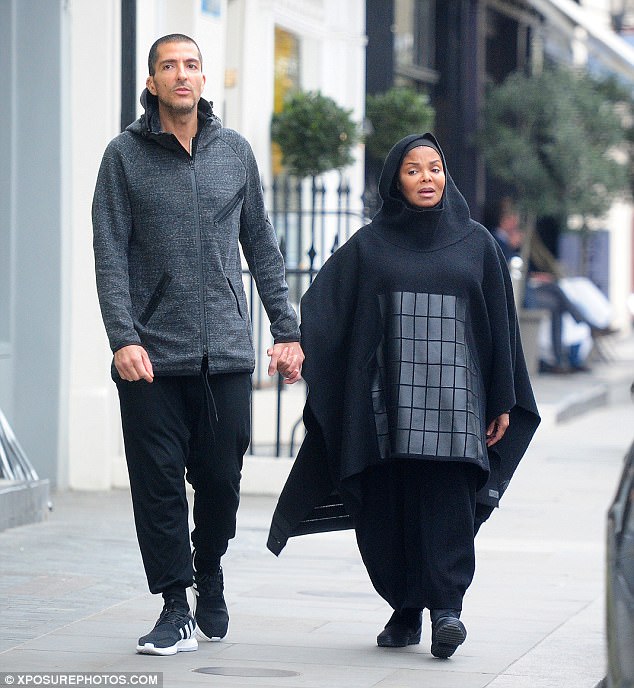 She had also changed her style on-stage. Gone were the tight-fitting catsuits that were her signature style. They were replaced by long-sleeved loose clothing. Jackson removed all references to sex from her lyrics and closed her concerts with ‘Inshallah’ — which means ‘God willing’ in Arabic — and even incorporated it into the chorus of one of her songs.

It caused many to speculate that the singer had converted to Islam. After all, her Qatari husband is a very conservative Muslim.

Indeed, close friends had said that Janet had immersed herself in Muslim texts soon after meeting Wissam Al Mana. ‘She feels like she has found a home with her new religion,’ a friend said then. ‘She has spent a great deal of time studying it. The days of raunchy dance moves and sexual lyrics are long gone.’

So dramatic was her image overhaul — and her new, low-key lifestyle since marrying Qatari-born Wissam, now 42, in 2012 — that there was even speculation she had converted to Islam to appease her stanchly religious other half (though her so-called ‘Muslim dress’ was later revealed to be £1,000 designer menswear from Adidas).

Since the couple’s son, Eissa, was born on January 3, Janet’s low-key way of life has continued…

…The separation is amicable, it was claimed, with Janet planning to stay in London to look after Eissa, and Wissam returning to his business ventures in New York and Qatar.

‘They’re both busy people, but determined to be good parents, even if they’re apart,’ the friend said.
Yet, last night, a very different picture began to emerge, of an apparently controlling, unhappy marriage, from which Janet has been desperate to escape for some time.

Sources say a clash of cultures has driven Janet and Wissam apart, made worse since the birth of baby Eissa, over whose upbringing and day-to-day care they disagree.

While Janet is keen to be a hands-on mother, Wissam, a wealthy businessman with £800 million to his name, has strict views on how his son should be brought up, and has hired round-the-clock staff to wait on his wife and child in their Belgravia home.

The baby has never been seen in public, and Janet was reportedly forbidden from leaving the house while she was nursing. Wissam, too, has disappeared from sight…

…‘Janet thought he had become too controlling during the pregnancy,’ explains the source.

‘She had already allowed him to dictate her appearance and even the way she performed at concerts. It drove her crazy, and she felt she was losing her fan base.’

Janet’s performances have, certainly, in recent years, been much toned-down versions of her usual displays — or cancelled entirely.

But the final straw, it seems, came last month when Janet’s 86-year-old mother was forced to return to Los Angeles after a two-month stay with the couple.

Katherine, the long-suffering matriarch of the Jackson family, is embroiled in an unpleasant court case against her nephew-in-law and former driver, Trent, whom she claims has been bullying and spying on her with hidden cameras in her LA home…

…Janet, who’s always been extremely close to her mother, was juggling the demands of a newborn with comforting Katherine, but Wissam is said to have shown a callous lack of interest in his mother-in-law’s plight.
Read more: Daily Mail

Janet Jackson doesn’t want to be controlled and told what to wear.

She wants to be a hands-on mother to her son.

She didn’t want to be forbidden from leaving the house while she is nursing.

Is this a clash of worldviews, or what?

Al Mana’s worldview is a middle-Eastern one that seems incompatible with a Western, liberty-based worldview.

Jackson had to change who she was to be with Al Mana.

And she just realized what that was.