Q: What’s worse than not being ‘secure in your masculinity’?
A: Your EPITAPH saying ‘insecure in his masculinity’.

You guessed it. In that ridiculous quest to artificially ‘measure up’ we have now gone beyond disfiguring injuries, and we now have our first fatality.

He obviously didn’t heed the warnings on why it really isn’t a good idea to try this surgery in the first place.

In an (almost) too-dumb-to-be-true story, one bro made his dubious mark in history.

A healthy, 30-year-old man in Stockholm wanted to increase both the girth and length of his genitals using a process where fat is transferred from his belly to his penis.

…A description of the case in the Journal of Forensic Sciences explained that surgeons had finished the elongation portion of the surgery and were in the enlargement part, which involved injecting the patient with two fluid ounces of his own fat cells, when things went wrong. The fat leaked into his veins and traveled to his lungs, which resulted in a lung embolism, rupturing his blood vessels. The patient, who was found to have no prior heart conditions, ended up having a heart attack on the operating table. – Men’s Health

“Fat leaked into his veins and traveled to his lungs…”

That’s disgusting. But we’re not done yet.

..Urologist Tobias Kohler, of the Mayo Clinic, who was not involved in this study, told BuzzFeed News that among the reasons surgeons advise against the “completely useless” surgery, is because it “never works” and because of “other horrible consequences, from disfigurement to permanent erectile dysfunction to even worse.” – Men’s Health

Doesn’t even a REMOTE risk of that result (to say nothing of ‘disfigurement’) put an end to this conversation before it happens?

If he was so damned insecure, he should have gone the Austin Powers route. 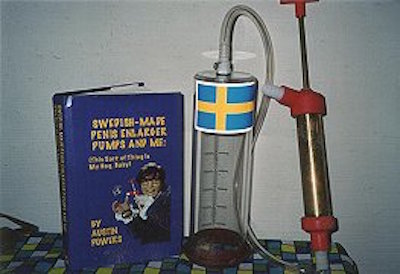 Seriously. Dude was Swedish and everything.

That, obviously, is the WRONG kind of ‘manning up’.

The RIGHT kind is exactly what this book was written about.

Fair warning — if you’ve been a ‘spectator’ in life, it will either hurt you or change you. (Quite possibly both.)