The rapper is still making headlines and his latest comments caused one heckuva backlash!

Kanye West has been all over the news both on the left and the right.

He’s posted a photo of himself wearing a MAGA hat, he’s advocating for free thought, and he’s said that he’s not a fan of being put into an identity box. Sure, he’s a rapper and a member of the black community, but he’s more than that.

He has criticized the ‘constant reminder of slavery’ to the black community and said that when the discussion was going on about putting Harriet Tubman on the $20 bill, he wanted to switch to bitcoin. As an entrepreneur, he wants people to have economic empowerment — stop talking about the past and give people tools for the future. He covers quite a bit of this in a 2-hour interview with radio and tv personality, Charlamagne tha God.

With that backdrop, West has caused a stir by saying that ‘400 years of slavery sounds like a choice’ in an interview with TMZ.

The rapper faced a furious backlash after her appeared on TMZ Live Tuesday telling the hosts: You hear about slavery for 400 years. For 400 years?

‘That sounds like a choice,’ he said, adding that ‘we are mentally imprisoned.’

He’s getting thousands upon thousands of angry comments.

Kanye sent out a flurry of tweets to clarify his position.

He also tweeted,  ‘Kanye vs the media is the modern day Willie Linch[sic] theory’.

The Willie Lynch theory is a much-disputed speech allegedly made by a slave-owner, William Lynch, in 1712 on the banks of the James River in Virginia. It deals with how to control slaves in the colony. The suggestion is that slaves should be pitted against one another by exacerbating differences like age, gender, and ‘shade’ so that they will remain ‘perpetually distrustful’ of each other.

He then tweeted about our conversation as Americans:

we are programmed to always talk and fight race issues. We need to update our conversation.

Now, in what appears to be an ill advised attempt to stem the backlash, Kanye tweeted that he was the modern day equivalent of Tubman, a historic abolitionist who freed seventy slaves and campaigned for women’s suffrage, and Nat Turner, who also freed around seventy black men in a bloody rebellion. 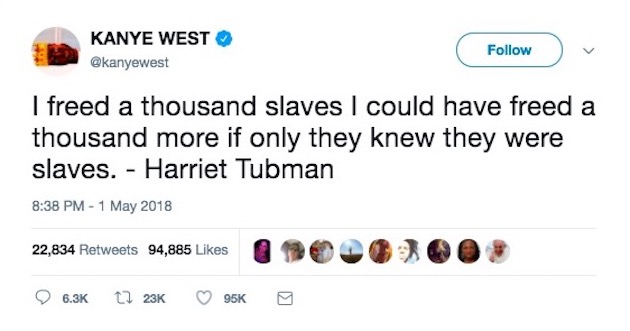 Watch what happens in the TMZ newsroom:

Here’s one of the enlightening things that Kanye said in his interview with Charlamagne:

“A black person can’t be imperfect in the public eye, that’s a form of control,” Mr. West said. “I’m here to show you imperfection. The beauty is in the imperfection.”
Source: New York Times

We’re all imperfect. And we’ll agree with some things that someone says and disagree with other things. But that’s what makes freedom of speech great — we can all express our views and have them critiqued.

We all have good ideas and bad ideas. Some of our thoughts are based in fact, and some are just irrational.

But it is the mark of growth when we can clearly express and clarify what we believe and why.

Perhaps that’s what Kanye’s doing now. He’s just doing it rather publicly with a very large voice in our culture.

That shouldn’t be criticized. It should be applauded. Even if we don’t agree with him as he’s working things out.

That’s for freeing the ‘Thought Slaves’.