If you are wondering why school choice scares the activist left so badly, it threatens the ability to indoctrinate an entire generation.

If you’re wondering why students are finishing school so woefully ignorant of life, the universe and everything; why they are long on emotions and activism, but short on facts and rational engagement here’s a hint.

The Canadian school system has the same problem we do here: activist teachers.

Plot twist: with the rise of social media, every concerned parent can now do the job of the citizen journalist.

One tenth-grade student in British Columbia brought home the ridiculous assignment his teacher gave him, with the ‘correct’ answers written by the teacher in pink (of course). 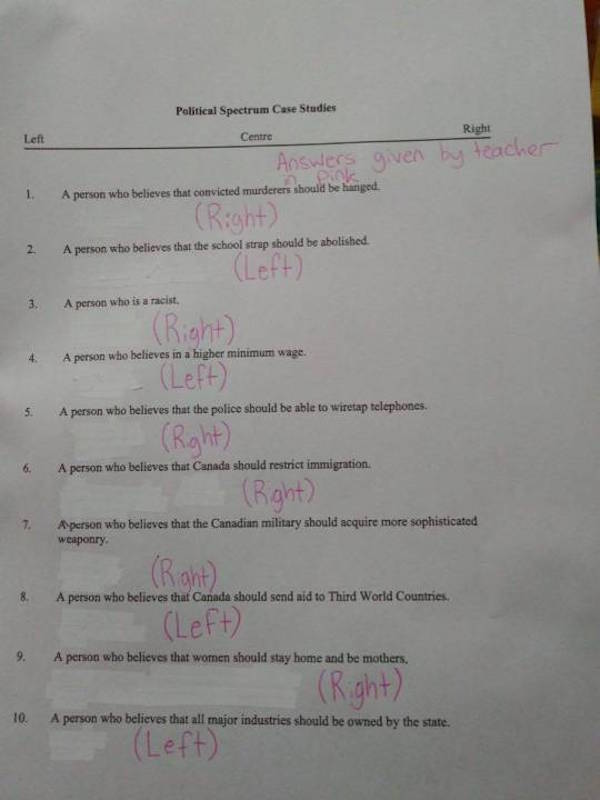 Matt deFouw said he took his concerns about the worksheet to the Kamloops-Thompson School District, which launched an investigation.

B.C.’s Education Ministry said in a statement Thursday the worksheet is not part of the school curriculum and it will not be used again in the district.

“Essentially, all the questions on only one piece of paper paint people, even right-of-centre people, as xenophobic, misogynist racists who want to enact a brutal police state that wiretaps and executes its citizens,” deFouw said in an interview.

He posted the worksheet from his son’s Grade 10 social studies class on his Facebook page. The school district confirmed that it was part of an assignment at Valleyview Secondary School.

“One question is, ‘Who is a racist?’ ” said deFouw. “And the answer is right-wing people. That’s about as clear as you need to be. Another example of a question was, ‘Who believes that women should stay home and be mothers?’ The answer is right wing.”

The assignment included 10 questions. DeFouw’s Facebook post included the answers provided to the students by their teacher.

What’s the lesson here? (Besides thinking twice about trusting your kids to the ‘care’ of the public school system?)

It’s the same lesson the Republican Senate learned in the Kavanaugh situation. Grow a pair!

The bigger option is school choice, where students getting a crappy education can vote with their feet, and force craptastic teachers to serve their students better.

The school got caught and shamed for crossing a line. The administrator made damned sure he said all the right things about not teaching partisanship to students.

He’s well aware that he’s under the public microscope, and will be more interested in keeping his job than in letting teachers go rogue and indoctrinate students.

We can and should hold people accountable.

Get involved. Find out what teachers are telling your kids.

Make it public when they go over the line.