Why won’t the Media (D) cover these fresh facts about Christine Blasey Ford?

On Saturday, the Senate Judiciary Committee released a 414-page document detailing the accusations of sexual assault made against Brett Kavanaugh and the investigation into those claims.

There were a couple of striking takeaways. The major one was that there was no evidence of Kavanaugh’s guilt with regard to any of the accusations.

On page 8 of the report, Chairman Grassley states that the Committee interviewed two men claiming that they may have had consensual encounters with Professor Ford. One incident in particular bore striking similarities to the incident Professor Ford claims was at the hands of Brett Kavanaugh.

[NAME REDACTED] (Sept. 24, Sept. 25): [NAME REDACTED] stated that after graduating from high school in Hampton, Virginia in 1982, he made several trips to D.C. that summer. During one of the trips, he attended a house party where he kissed and made out with a woman he met who he believes could have been Dr. Ford. [NAME REDACTED] said that based on old photographs of Justice Kavanaugh he has seen on the news, he believes the two of them share a similar appearance.

The second one included some details that include the location to be near where Professor Ford says the house was, that someone jumped on the bed the way that she claimed that Mark Judge had done and that the girl in question was wearing a one-piece bathing suit.

[NAME REDACTED] (Sept. 26): [NAME REDACTED] stated that when he was a 19 year-old college student, he visited D.C. over spring break and kissed a girl he believes was Dr. Ford. He said that the kiss happened in the bedroom of a house which was about a 15-to20 minute walk from the Van Ness Metro, that Dr. Ford was wearing a swimsuit under her clothing, and that the kissing ended when a friend jumped on them as a joke. [NAME REDACTED] said that the woman initiated the kissing and that he did not force himself on her.

The next big issue in the report is the ongoing investigation into the role of Professor Ford’s best friend and recently retired FBI agent, Monica Lee McLean. It seems that Ms. McLean had retired from the FBI in 2016, and may have been the ‘handler’ for Professor Ford.

An ex-boyfriend of Blasey Ford identified Monica McLean as the woman that Professor Ford coached on how to take a polygraph, despite saying in her testimony that she had never done that. 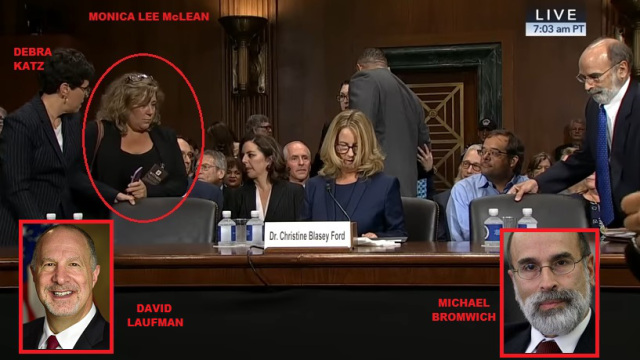 When the Senate Judiciary Committee was trying to contact Professor Ford about testifying before them, Ford was in Rehoboth Beach, Delaware.

Remember those ‘beach friends’ Ford talked about? Monica Lee McClean — who was present at the hearing — has an expired Law Licence registered at that location.

Here’s the testimony, followed by a keen observation:

MITCHELL: The second is the letter that you wrote to Senator Feinstein, dated the — July 30th of this year.

MITCHELL: Did you write the letter yourself?

MITCHELL: And I — since it’s dated July 30th, did you write it on that date?

FORD: I believe so. I — it sounds right. I was in Rehoboth, Delaware, at the time. I could look into my calendar and try to figure that out. It seemed…

MITCHELL: Was it written on or about that date?

FORD: Yes, yes. I traveled, I think, the 26th of July to Rehoboth, Delaware. So that makes sense, because I wrote it from there.

MITCHELL: Is the letter accurate? FORD: I’ll take a minute to read it.

Ms. Blasey-Ford and Ms. McLean, the BFF she coached on lie detector testing, together for the four days leading up to the actual writing of the letter. July 26th to July 30th. — Source: Conservative Treehouse

Considering how everything else in this Kangaroo Court was so heavily politicized, is it beyond plausibility that four days before “the letter” is written, hanging out with her ‘beach friends’ and any other politically-connected contacts she may have made through working at the FBI could not have been put forward to achieve partisan ends?

And before you say ‘It could never happen’, there was a time when we would have said that we would never see a Presidential candidate be spied on. Or the weaponization of the IRS against political foes. Or Senators being hacked by the CIA.

Or the long string of “curious circumstances” that led to the FISA Warrant against — and eventual arrest of — one George Papadopalous.

There was a time that such things would have been beyond imagining in America.

The Left has shown themselves aggressive and desperate in any number of shocking ways since Trump’s election.

What other mischief remains to be discovered?