Occasional-Cortex sounds like the leader of a death cult. How much longer before her Instagram Live cooking videos feature Kool-Aid?

She’s already made it clear that she believes we only have 12 years left before life as we know it is over. You’d better get prepared for that. Call your parents, kiss your spouse, hug your kids, and smoke ’em if you’ve got ’em. This is the end, folks. 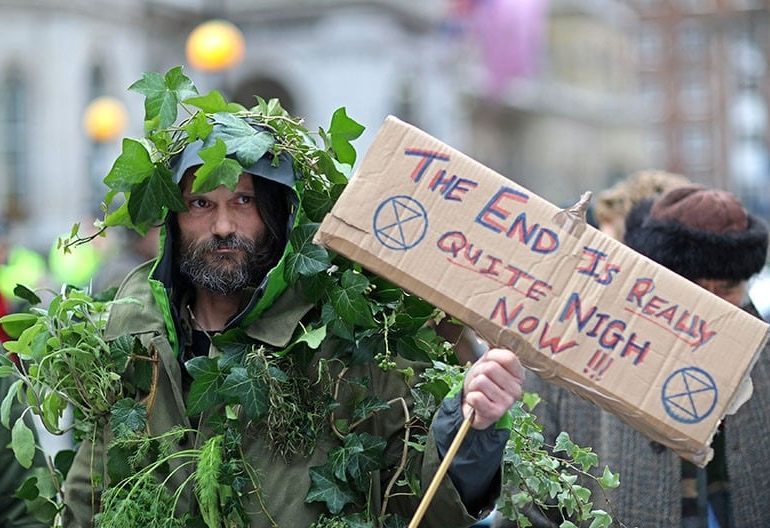 During her latest Instagram live cooking video, (FYI, she was making vegetarian chili,) Rep. Alexandria Ocasio-Cortez(D-NY) said that if we don’t ‘turn this ship around’ our planet is ‘going to hit disaster’ while stating that there was ‘scientific consensus’ that the lives of children will be very difficult. She then said that the looming climate catastrophe has made young people reconsider having children.

Here’s what AOC said while using a very large knife to chop a sweet potato:

Our planet is going to hit disaster if we don’t turn this ship around and so it’s basically like, there’s a scientific consensus that the lives of children are going to be very difficult. And it does lead, I think, young people, to have a legitimate question, you know, ‘Is it okay to still have children?’

Socialist @AOC discusses how people should reconsider having children due to global warming, and reminds us that we are all going to *literally* die if the Green New Deal doesn’t pass. She also takes some shots at Dianne Feinstein. *Sidenote: She failed to compost her potatoes* pic.twitter.com/6eWhbTbqqB

The suggestion that life will become unbearable for children because of a possible 1.5 to 2 degree Celsius change in global temperature in the next 100 years unless we embrace socialism and allow the government to take over large swaths of the economy is utter horsecrap. During the worst times in history, people have still had children. Check out the story of this midwife that delivered 3,000 babies in Auschwitz and refused to kill them.

People will still have babies, no matter how hard the Democratic Party prays to Molech.

This emotional appeal using children comes hot on the heels of the failed launch of her ‘Green New Deal’ which was soundly mocked by conservatives because it read like a fever dream transcribed by a 12-year old.  it could cost as much as $97 TRILLION dollars over the next 10 years. That’s $600,000 per household.

AOC is from the ‘participation trophy’ generation that wants an ‘A for effort’ instead of for the work itself. She believes that trying is more important than actual success, and she should be applauded for coming up with an impractical, unimplementable plan. Oh, and if you disagree with her plan to eliminate cow farts and air travel, well, maybe you can cash her outside, ‘how ‘bow dah?’

Alexandria Ocasio-Cortez is the "Cash Me Outside" girl from Dr. Phil pic.twitter.com/JRvmtbVLg5

She’s not the only one that uses children. The environmental movement has been doing that for decades. On Friday, the Sunrise Movement, a leftist youth climate activist organization, confronted Sen. Dianne Feinstein(D-CA) in her office demanding support for the Green New Deal. The ‘gotcha’ moment didn’t go exactly as planned. What happened was pretty epic — the kiddos and their handler got slapped down by Sen. Feinstein.

This is how @SenFeinstein reacted to children asking her to support the #GreenNewDeal resolution — with smugness + disrespect.

This is a fight for our generation's survival. Her reaction is why young people desperately want new leadership in Congress. pic.twitter.com/0zAkaxruMI

AOC’s Instagram video chock-a-block full of the word ‘like’ includes a shot at Sen. Feinstein for ‘working on it for 30 years’ and said that that just wasn’t good enough because the ‘watered down’ proposals are ‘going to kill us.’

Socialist @AOC eviscerates @SenFeinstein and calls her a political coward. This is wild. pic.twitter.com/ZQQw7Ibixh

This idea that ‘I’ve been working on this for x-amount of years,’ um, it’s like not good enough. Like, we need a universal sense of urgency, and people are like trying to introduce watered-down proposals that are frankly going to kill us. A lack of urgency is going to kill us. The issue has gotten worse. So I don’t think that working on an issue for 30 years alone is what qualifies as, as what someone qualified to solve an issue. That said, there are a lot of people that have been doing this work for decades that have proposed ambitious solutions for years and have not been listened to. So it’s not just, ‘I’ve been doing this for 30 years,’ so we need to listen to them because, frankly, people have been failing at the same things for 30 or 40 years. What we need to do is say, ‘What solutions have not been tried yet? And what ambitious scale have we not shot at yet.’ And let’s do it.

Weird. Didn’t she just say that she should be considered ‘the boss’ because she came up with a completely harebrained and unfeasible plan? And yet, she’s mocking Sen. Feinstein for working on a solution for 30 years.

She’s basically saying that we need to embrace the Green New Deal or we’re all going to die.

Which is it, do you get lauded and awarded a participation trophy for your mangled, incoherent blather filled with ‘good intentions’ and no discernable way to pay for it, or do you actually have to have something implementable?