He’s one of the really good guys, and he brings an interesting perspective to the conversation.

And don’t worry, he’s not the guy in the photo. That’s who he’s here to denounce as an insufferable dumbass with a ‘desert ideology’.

For those of you unfamiliar with his story, Imam Tawhidi was born in Iran and was, in his youth, a radicalized Muslim, until he saw how bankrupt that way of living truly was. Now he’s living in Australia and pushing for Western-style reforms within Islam, and religious toleration between groups whose disagreements have historically flared into conflict.

When he sees threats to his stated objective, he calls them out.

His ongoing battle with Ilhan Omar is one example of that (see his ‘pinned tweet’), and this video is another example.

“Enslave all those who don’t embrace Islam or kill them.”

These are the hateful Imams that roam around in London and America, importing their desert ideologies. If the “Muslim Ban” bans his type, then every country needs one.

The rest of us are fine. pic.twitter.com/9sUBMnkt5f

Here is what the Imam he’s criticizing was saying:

Those who do not want to worship Allah should be enslaved, forced to pay the Jizya poll tax, convert to Islam or fought against. These are the four options and there is no fifth option.

So we fight him for that reason. If we kill him, he goes to Hellfire. And if we capture him, he becomes a slave. In such case, he is forced into slavery since he refused to become a respected slave (of Allah), he shall become a despicable slave against his will.

This is the way things go with those who do not worship Allah.

That’s about half of the video. It goes on to say why it is wrong to feel sorry for or merciful toward those who they think ‘deserve’ such a fate. 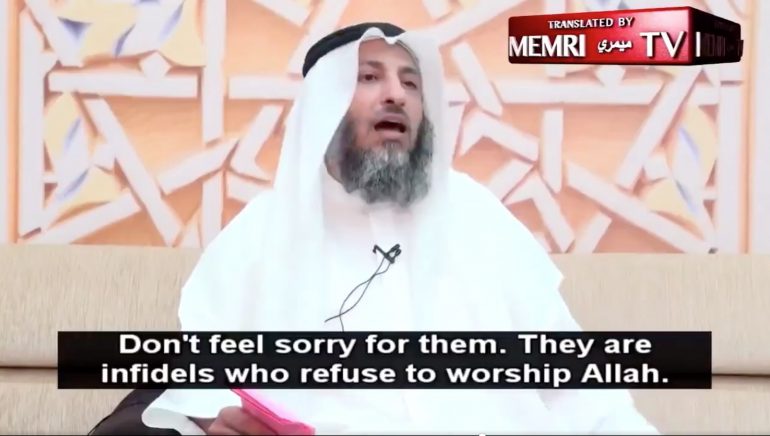 Needless to say, the Imam of Peace does NOT share this moron’s view, as he said in the tweet:

These are the hateful Imams that roam around in London and America, importing their desert ideologies. If the “Muslim Ban” bans his type, then every country needs one.

The rest of us are fine.

If more people called out the guys in the video as asshats, we would have fewer problems like the one we’re seeing in Iran in the world today.