“I bit his balls to get him off of me”

If there were a pool on what our weirdest news story of the year was, this one would certainly be in the running.

In Baton Rouge, a woman’s dog was not on a leash and found it’s way into an enclosure with camels. No, it wasn’t a zoo, it was Tiger Truck Stop which is known for bringing in exotic animals for display.

The dog ducked under the double barbed wire and into the pen. 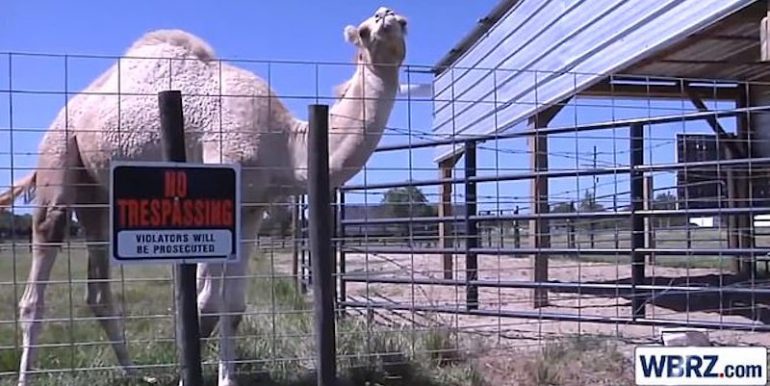 As the lady tried to catch her dog, she disturbed the camel who decided to sit down on top of her ‘very nearly crushing her’, according to WBRZ. Camels can weigh up to 1,100 pounds.

The woman had to do whatever she could to get out from under the animal, a male dromedary, and so she bit on the animal’s testicles.

She was taken to a local hospital, but her condition is unknown, WAFB reports.

No serious injuries to the camel were reported.
Source: DailyMail

Yup. That would get his attention.

The camel was not found to have done anything wrong.

Adding insult to injury (so to speak)…

‘The camel did nothing wrong,’ Hamilton continued. ‘The couple were aggressive. The camel was just doing its normal routine.’

The couple was cited for trespassing and violating area leash laws.

Authorities didn’t find reasons to hold the truck stop liable for their injuries because the camel was enclosed and signs warning visitors to stay out are posted every 10 feet along the fence.
Source: DailyMail