Who is this guy? He belongs to a group that exists only to take pot-shots at right-of-center Christian personalities and groups.

This isn’t the kind of review that evaluates the content of a book, film or organization as either strong or weak.

It’s the sort of organization that goes rummaging through your trash looking for something about you worth hating. And if they don’t find one, they can just pull something out of their caboose.

How reliable should we consider this guy from ‘Right Wing Watch’? Well, for starters, so committed is he to excellence that he couldn’t even be bothered to make sure he got the name of the guy he was intent on slandering correct. (Original article here.)

Not only was it wrong, but he was also so lazy that he couldn’t even be bothered to read the PHOTOS he embedded. Doug’s ACTUAL name was right there.

Like so many others of his stripe, Kyle Mantyla, whoever he is, is a parasite whose sole societal purpose is to tear down the work and reputation of people who do not hold to the right ideas.

This is the first we’ve come across that name. We’re not the only one. When we asked Doug to comment, he asked the same question we asked… ‘Kyle who’?

We’ll touch on what it was he was yammering about before turning the spotlight back on him.

Right-wing columnist and commentator Doug Giles appeared on “The Eric Metaxas Show” earlier this week to promote his latest book, “Would Jesus Vote For Trump?” Not surprisingly, Giles insisted that Jesus would, in fact, vote for President Trump because Trump possesses a Christ-like sense of boldness and “a prophetic edge.”

Giles, author of “Pussification: The Effeminization of the American Male,” spent the program making the case that Trump has a lot in common with various biblical figures, including Jesus.

“One of the interesting things about Trump, just from a leadership standpoint, that I think is very Christ-like,” Giles said, “is just his boldness. Jesus would call out the corrupt religious leaders and politicos that were foul and he would say, ‘You guys are blind leaders of the blind.’ And he would do that in public.”

Let’s cue up the interview to the section cited and see what Doug — that’s D-O-U-G ‘DOUG’ — REALLY said.

Let’s spell it out for ‘Kyle who’ [yes, KYLE, that was intentional AND pejorative]; here is what Doug ACTUALLY said, you duplicitous hack:

“Short answer, Jesus being King of Kings and Lord of Lords, I doubt he’d vote for ANY human being, however, Trump’s policies, from a biblical standpoint, if you run the (in particular) through the sieve of Matthew Mark Luke and John, I’d say if you’re a Christian, and you really take your Christian worldview seriously, he’s your best buddy from a political standpoint in my humble, obnoxious, redneck opinion. I really think, from a governance aspect, If (that’s a huge ‘if’) the believer takes their Christian worldview and the implementation of that in a policy standpoint seriously than, man, I don’t know anybody else who’s bested him, again from a governance aspect, and that includes Reagan. And that’s not just me saying that, that’s the Heritage Foundation.

If he couldn’t get the foundational facts like the answer to the question of whether Jesus would literally vote for anyone, or even Doug’s freaking NAME, we can set aside any idea that this is a serious critique of any content.

He’s just on the internet swinging blind haymakers and hoping something lands. He’s probably one of countless such drones whose entire role in life is not to create or inspire in any way, but to attack, undermine and defame.

What CAN we take from this so that reading something ‘Kyle who’ wrote isn’t a COMPLETE waste of everyone’s time? Well, it tells us something about the other side’s tactics.

His activist site “Right Wing Watch”. If you look, there is a banner on that page telling us what their ‘mission’ is.

The text reads: Right Wing Watch, a project for People of the American Way, is run by a dedicated staff driven to shed light on the activities of right-wing political organizations. As a non-profit working hard every day to expose the Far-Right’s extreme and intolerant agenda, our main source of support is donations from readers like you… [blah, blah, blah, send money.]

Right Wing Watch was set up by People for the American Way, and founded in 1981 with funding from the Tides Foundation as a Leftist pushback against the Evanglical Christian ‘Moral Majority’ of the day.

It has on its board of directors such ‘honorable’ citizens as Alec Baldwin, and (shocker!) this pops up when you visit their site. 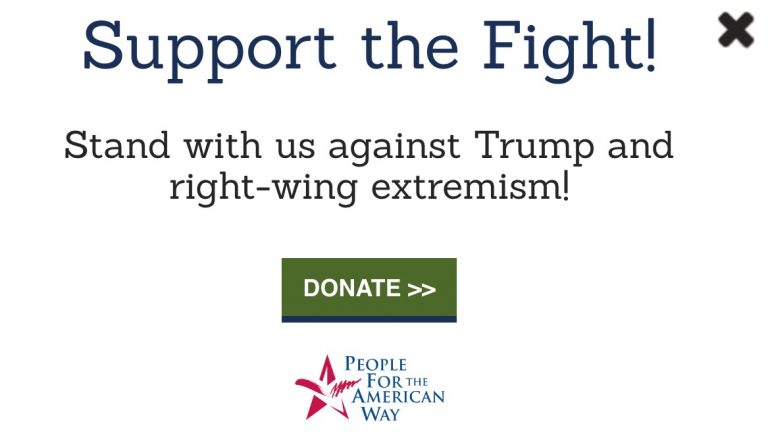 Clearly they could be counted upon to give a dispassionate review of Doug’s Pro-Trump book.

But that’s not all. They don’t just hammer away in their basements at people like Doug. No, no. no…

People For the American Way monitors what it characterizes as “right-wing” activities, advocates for a left-of-center policy agenda, and helps to elect liberal political candidates. [2] PFAW’s policy includes left-of-center positions on a wide-range of issues including public funding of abortion providers, a path to citizenship for illegal immigrants, tax and spend big government budgeting, and a general opposition to President Donald Trump’s policies and appointments. [3] [4] [5]

PFAW also publishes the website RightWingWatch, which has published thousands of posts monitoring and attacking conservative political beliefs in support of the PFAW’s left-of-center agenda.[8]

PFAW has spent over $1.6 million lobbying congress and state governments on hundreds of liberal policy prerogatives, and through its affiliated PAC has given out nearly $1.7 million in political contributions to Democratic candidates and causes. [9] [10]
Source: Influence Watch

Here is the original piece where WE covered Doug’s interview with Metaxas: WATCH: Bestselling Christian Authors Talk Trump – The ‘IMPEACH HIM’ Crowd Won’t Like This

And since we’ve been talking about the book, we should probably link to it, too.