With three Transit Workers dying every day of Coronavirus, is there a (literally) fatal flaw in the Left’s supposed utopia? One report seems to say so.

AOC and her drones have a very specific view of the future, and anyone who doesn’t buy into it is some kind of a backward-looking troglodyte. Or something.

We’re going to be left in the past, they say. Meanwhile, these young visionaries dream of a day where nobody needs to own their own car (thanks to mass transit) everyone will congregate in the cities, and nature will more or less reclaim the rest of the planet, except for those massive swaths of former farmland set aside for the production of wind and solar.

There are a few flaws in that vision, many of them tied to the role petroleum-based energy plays in getting everything we need to supply our fight against the illness manufactured, processed and delivered to the final destination — to say nothing of all the oil-based components in the medical equipment and PPE, or the role it plays from field to shelf in the food chain.

But their solution to driving itself causes a problem. Mass-transit people movers have an inherent flaw. People packed into close proximity is makes for very efficient transmission vectors of airborne and other illnesses.

The Wuhan Coronavirus is no exception.

We at ClashDaily have long suspected that was one of the risk factors particular to New York City’s significant outbreak. Now we have something that might potentially back that theory up.

New York’s Mass transit made them especially vulnerable to the rapid spread of disease.

And even the well-intentioned policies of running fewer trips, and using rear door entry may have done more harm than good. 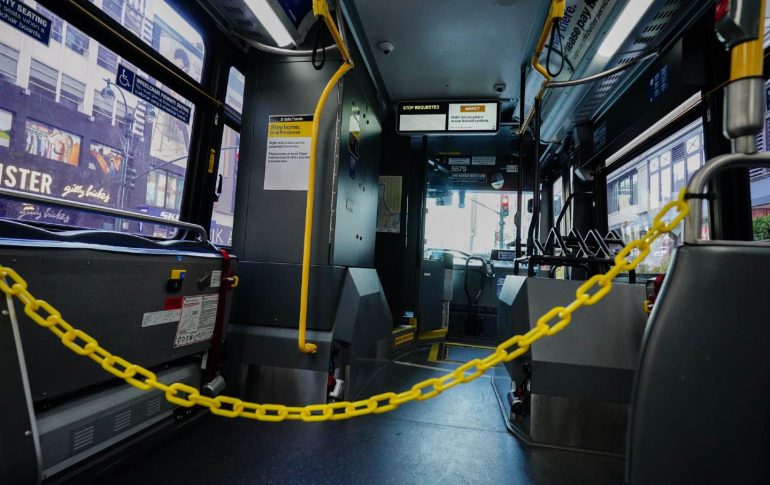 (Hat Tip to Mark Levin whose show from Apr 17th first alerted us to this source.)

New York City’s multitentacled subway system was a major disseminator – if not the principal
transmission vehicle – of coronavirus infection during the initial takeoff of the massive epidemic that became evident throughout the city during March 2020. The near shutoff of subway ridership in Manhattan – down by over 90 percent at the end of March – correlates strongly with the substantial increase in the doubling time of new cases in this borough. Maps of subway station turnstile entries, superimposed upon zip code-level maps of reported coronavirus incidence, are strongly consistent with subway-facilitated disease propagation. Local train lines appear to have a higher propensity to transmit infection than express lines. Reciprocal seeding of infection appears to be the best explanation for the emergence of a single hotspot in Midtown West in Manhattan. Bus hubs may have served as secondary transmission routes out to the periphery of the city.

…The Metropolitan Transit Authority’s decision to cut back its train service to
accommodate the reduced demand may have indeed helped to shore up the agency’s financial
position, but it most likely accelerated the spread of coronavirus throughout the city. That’s
because the resulting reduction in train service tended to maintain passenger density, the key
factor driving viral propagation (Goldbaum and Cook 2020). How ironic it is that, from the public health perspective, the optimal policy would have been to double – maybe even triple – the frequency of train service. The agency’s decision to convert multiple express lines into local service only enhanced the risk of contagion (Goldbaum 2020). How ironic it is that the preferred policy would have been to run even more express lines. We have not seen any public data on the incremental cost of the agency’s decision to begin to disinfect subway cars twice daily. Still, it is natural to inquire why the cars weren’t disinfected every time they emptied out of passengers at both ends of the line.
The press has recently reported a significant number of coronavirus infections and deaths among front-line MTA workers. As of April 10, 2020, there were 50 deaths among 1,900 workers who had tested positive (Guse and Rayman 2020). Tragically, the counts of infected and fallen workers have continued to grow. By April 16, the MTA had reported 68 deaths among more than 2,400 subway and bus employees who had tested positive. “Another 4,400 are on home quarantine and thousands more are calling out sick.” (Metropolitan Transportation Authority (MTA) 2020a)

But we’re all supposed to just forget everything that just happened here. To ignore any lessons learned about sharing the air with hundreds of strangers when you’re doing that morning commute. Pretend it makes the world a ‘better place’ without paying any sort of offsetting or corresponding cost, right?

Will we go right back to business as usual? Or will we give our transit use a serious rethink and policy overhaul?