If a group claims to work on behalf of women who have been harassed, abused, or assaulted, you’d expect there would be some sort of evidence of progress toward that goal, right?

After all, this screenshot is taken directly from their website. It suggests that this is kind of a priority for them… 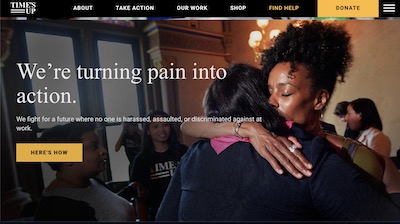 There’s an old expression that says something like, ‘you show me your checkbook, and I’ll show you your priorities’.

If that’s the measuring stick we’re going to use for Time’s Up, these folks have some explaining to do.

With so much money in their coffers, what did they spend it on?

The tax filings detail the mission of Time’s Up Now as being: ‘to promote safe, fair and dignified work for women of all kinds. We work to make sure that women are free from harassment and other forms of discrimination on the job, have equal opportunity for economic security and can achieve the highest positions of power wherever they work.’

But according to the Post, huge amounts were spent on executive salaries instead of legal support.

Lisa Borders was recruited to head Time’s Up but only spent four months at the organization after her 36-year-old son was accused of sexual misconduct.

The Chief Marketing Officer, Rachel Terrace, drew a salary of $295,000 for her efforts during the organization’s first year.

But most of the defense fund money came from grants that had been made to the Women’s Law Center, according to the New York Post.

Only a small proportion came from the Time’s Up organizations with the Time’s Up Foundation donating $132,575 to the fund and Time’s Up Now, the lobbying end of the charity, handing over $179,426.

Aside from executive compensation, tax filings show that Time’s Up Now, which is the lobbying arm of the organization, was noted to have spent $157,155 on conferences ‘designed to build community and spark critical conversations about gender equity’, according to the Post.

The conferences included a retreat at a luxury resort and spa in Ojai in June 2018 where a room for the night costs upwards of $400-a-night. –DailyMail

What is this organization really about?

By the look of it, their real mission statement is about finding ways to leverage popular social issues into spectacular profit. Looking at some of the ridiculous funding other social justice groups are having shoveled their way, and this is looking more like a pattern than a one-off.

Since so much of this money is given as a tax deduction by people and corporations, who’s really getting screwed over and stuck with the tab here?