It’s a contest of giants. Which of these entitled hags is MORE ungrateful?

Angela Merkel said something so colossally stupid that it elevates her in the same weight class of stupid as Hillary Clinton.

Who wins this round? You be the judge!

While Germany and Europe would strive to maintain relations with the US and Britain, Ms Merkel said, “we need to know we must fight for our own future as Europeans for our destiny.”

Her comments came after Mr Trump said he needed more time to decide if the US would continue backing the Paris climate deal, which has frustrated European diplomats.

…G7 leaders went on to blame the US for the failure to reach an agreement on climate change, in an unusually frank statement which read: “The United States of America is in the process of reviewing its policies on climate change and on the Paris Agreement and thus is not in a position to join the consensus on these topics. —Independent

Angela picked MEMORIAL WEEKEND to suggest that Europe couldn’t depend on America for their destiny.

That’s pretty rich… for a Chancellor of Germany to say. And of ALL the weekends to say it!

You might remember that ‘somebody farted’ look on everyone’s face when Trump called leaders out for failing to adequately FUND Nato per their national commitments?

Their thanks for USA shouldering the financial weight of NATO while they build windmills? 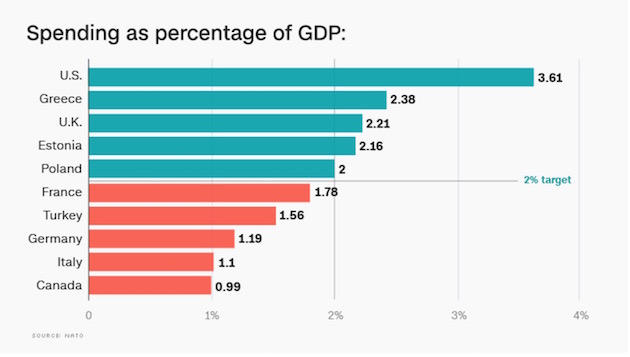 Their thank-you note is in the mail. For sure.

So not only did America bleed the ground red to save Europe from GERMAN aggressors. (Twice!)

And … when Merkel’s little social experiment with absorbing a wave of Syrian (?) refugees explodes in her face…. who do you think will be called to defend them?

NATO? Meh. Why would THAT be important?

Let’s address something that REALLY matters. Like save the environment.

On the other hand, Hillary owes her ENTIRE wealth and existence as a direct result of a short-sighted electorate putting her and her husband into high office again and again.

Hillary had an utter disregard for the rules that bound her behavior — see: bathroom server; Rigged Primary — and disdain for the nation who had so often elected them — see: ‘basket of deplorables’.

But she went further. When she LOST, it wasn’t because she was outworked. Or because she basically took September off. Or becuase she was more interested in visiting donors? Or becuase Bernie Voters felt burned when they figured out the game was rigged from the beginning?

No. In a shameless and endless display of sour grapes, she is BLAMING everyone but herself — including the Voters themselves.

Great show of thanks to the ‘little people’ who were responsible for the wealth she enjoys in the first place.

Who Is MORE Ungrateful For America -- Hillary Or Merkel?