Because nothing QUITE says ‘regret’ like ‘what difference, at this point, does it make’?

Addressing the media for the first time since the House Select Committee on Benghazi released its long-awaited final report, the presumptive Democratic nominee said:

“No one has thought more about or lost more sleep over the lives that we lost – the four Americans, which was devastating. And we owe it to those brave Americans to make sure we learn the right lessons from this tragedy. …

.@HillaryClinton on Benghazi: ‘I think it’s pretty clear it's time to move on.' pic.twitter.com/DRKI2y63H9

Hillary completely dismissed the Republican report on Benghazi today, telling everyone to ‘move on.’ Are you ready to move on even though Hillary hasn’t faced consequences for this?

Hillary Clinton dismissed a Republican broadside on her and President Obama over the Benghazi attacks today saying: ‘Move on.’

The Republican members of the House Benghazi committee issued their 800 page report with excoriating words for her and the president, accusing her of ‘shameful’ conduct over her secret email account, and the White House of lying about what caused the attacks.

Her ‘homebrew’ server was only revealed because of the investigation into the deaths of four Americans, including Ambassador Christopher Stevens.

The blistering 800-page report excoriates the Obama administration, finding that it lied about what caused the attacks which claimed the lives.

It says what went wrong may never be fully known because of a ‘shameful’ decision by Hillary Clinton not to turn over the contents of her secret ‘homebrew’ server, whose existence only came to light because of the investigation.

But her response was curt. ‘I think it is pretty clear it is time to move on,’ she said.

Republicans on the House Benghazi Committee claimed Tuesday that the Obama White House and Hillary Clinton lied repeatedly to the American people about the nature of and reasons for the 2012 terror attacks in Benghazi, Libya, even as they privately acknowledged what caused them.

The report offers no explanation for why it took 18 hours for military assets to reach the Libyan city – many hours after the president ordered every possible measure to be taken, and the then defense secretary testified that he ordered deployment.
Source: DailyMail

Here’s some more food for thought about that period of time.

We have the testimony of Scott Wicklund, the Ambassador’s bodyguard.

It is part of the testimony in the case against Ahmed Abu Khattala, who is on trial for the attack in Benghazi.

While the Embassy burned, and those in it fought desperately for their lives, a ‘Deputies meeting’ argued for hours about whether any rescuers should show up in ‘official’ US uniforms and marked vehicles… to keep the Libyan Government of the day happy.
Read the rest, including the Ambassador’s last words at: ClashDaily

Hillary’s remarks to one of the parents were recorded in a diary: 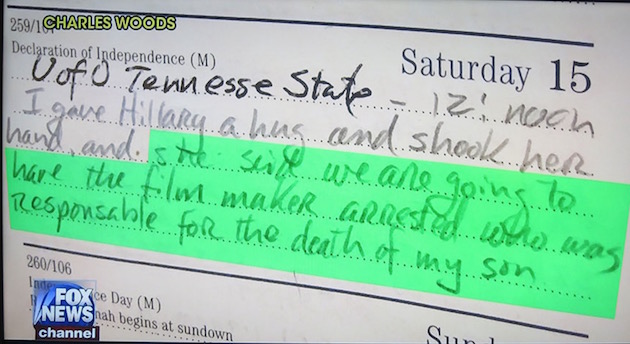 But we all know that even THEY didn’t believe that was the real cause. But admitting the truth that close to an election was pretty risky.

We’d have to be loopy to believe anything they are telling us.

Prominent Democrat Was Aware of Russian ‘Bounties’ for Months – Did Nothing
July 3rd, 2020 Liberty Hub

Mainstream Media Reported On Armed Woman Pulling Her Gun On BLM Provocateur – But They Didn’t Present The Entire Truth – Here It Is (Video)
July 3rd, 2020 Sons of Liberty Media