For the critics fearing that we’d taken our foot off the gas on ISIS in Turkey… we’ve got some BIG news. One of the head honchos of the bad guys has been reduced to a fine red mist.

Better still, his death was not one of courageous defiance, but he was a cowering, blubbering mess.

The president said al-Baghdadi “went into a dead-end tunnel, whimpering and crying and screaming all the way,” and died when he detonated a suicide vest.

“[Baghdadi] spent his last moments in utter fear, in total panic and dread, terrified of the American forces bearing down on him,” Trump said.
Source: MSN 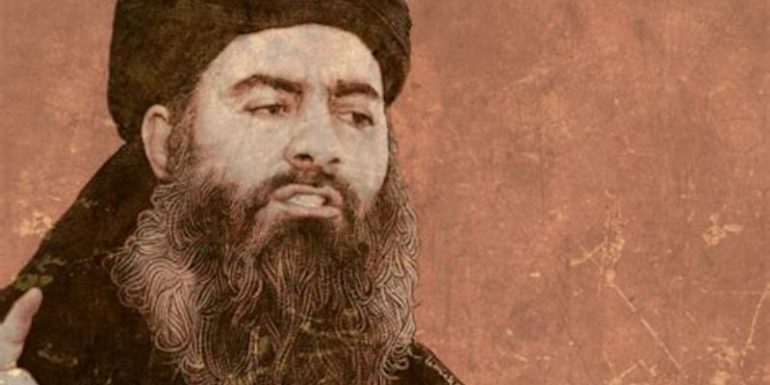 That’s the kind of video clip that you would LOVE to see go viral if it can be done without exposing any secrets. Having their leaders play the blubbering coward in the face of US forces should sap some of the strength out their Jihadi recruiting drives.

“This is a great day for America, it’s a great day for the world,” Defense Secretary Mark Esper said. “The president made a bold decision to launch this raid and our military service members and our interagency partners executed brilliantly.”

President Donald Trump announced the death of the ISIS leader in an address to the nation Sunday morning. Al-Baghdadi was targeted Saturday in a nighttime raid by U.S. special operations forces in Syria. — Source: MSN

There was a treasure trove of information seized in the process, which has already lead to the death of his right-hand man, their information officer.

The Turkish leader weighed in with his support:

“The killing of Daesh’s ringleader marks a turning point in our joint fight against terrorism,” Erdogan said on Twitter, using another name for IS. His tweet came after Trump announced Baghdadi’s death during a nighttime raid by US special forces deep in northwestern Syria.
Source: BusinessStandard

And where was Trump as this happened?

He was watching it unfold in real-time from the White House. 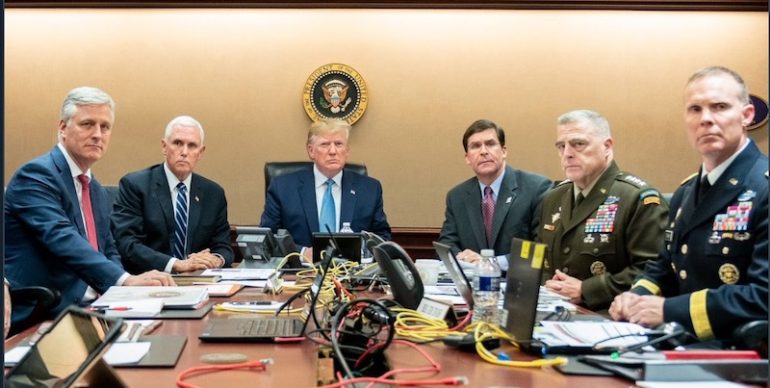 Remember how Trump made a specific priority of smashing ISIS until it became was-was?

The death of al-Baghdadi is yet another step toward the fulfilling of that promise.

These was his official statement:

THE PRESIDENT: Last night, the United States brought the world’s number one terrorist leader to justice. Abu Bakr al-Baghdadi is dead. He was the founder and leader of ISIS, the most ruthless and violent terror organization anywhere in the world.

The United States has been searching for Baghdadi for many years. Capturing or killing Baghdadi has been the top national security priority of my administration. U.S. Special Operations Forces executed a dangerous and daring nighttime raid in northwestern Syria and accomplished their mission in grand style. The U.S. personnel were incredible. I got to watch much of it.

No personnel were lost in the operation, while a large number of Baghdadi’s fighters and companions were killed with him. He died after running into a dead-end tunnel, whimpering and crying and screaming all the way. The compound had been cleared by this time, with people either surrendering or being shot and killed. Eleven young children were moved out of the house and are uninjured. The only ones remaining were Baghdadi in the tunnel, and he had dragged three of his young children with him. They were led to certain death.

He reached the end of the tunnel, as our dogs chased him down. He ignited his vest, killing himself and the three children. His body was mutilated by the blast. The tunnel had caved in on it, in addition. But test results gave certain immediate and totally positive identification. It was him.

The thug who tried so hard to intimidate others spent his last moments in utter fear, in total panic and dread, terrified of the American forces bearing down on him.

We were in the compound for approximately two hours, and after the mission was accomplished, we took highly sensitive material and information from the raid, much having to do with ISIS origins, future plans, things that we very much want.

Baghdadi’s demise demonstrates America’s relentless pursuit of terrorist leaders and our commitment to the enduring and total defeat of ISIS and other terrorist organizations.

Our reach is very long. As you know, last month, we announced that we recently killed Hamza bin Laden, the very violent son of Osama bin Laden, who was saying very bad things about people, about our country, about the world. He was the heir apparent to al Qaeda.

Baghdadi has been on the run for many years, long before I took office. But at my direction, as Commander-in-Chief of the United States, we obliterated his caliphate, 100 percent, in March of this year.

Today’s events are another reminder that we will continue to pursue the remaining ISIS terrorists to their brutal end. That also goes for other terrorist organizations. They are, likewise, in our sights.

Baghdadi and the losers who worked for him — and losers they are — they had no idea what they were getting into. In some cases, they were very frightened puppies. In other cases, they were hardcore killers. But they killed many, many people. Their murder of innocent Americans — James Foley, Steven Sotloff, Peter Kassig, and Kayla Mueller — were especially heinous.

The shocking publicized murder of a Jordanian pilot, a wonderful young man — spoke to the King of Jordan; they all knew him, they all loved him — he was burned alive in a cage for all to see. And the execution of Christians in Libya and Egypt, as well as the genocidal mass murder of Yazidis, rank ISIS among the most depraved organizations in the history of our world.

The forced religious conversions, the orange suits prior to
so many beheadings, all of which were openly displayed for the world to see, this was all that Abu Bakr al-Baghdadi — this is what he wanted. This is what he was proud of. He was a sick and depraved man, and now he’s gone. Baghdadi was vicious and violent, and he died in a vicious and violent way, as a coward, running and crying.

This raid was impeccable, and could only have taken place with the acknowledgement and help of certain other nations and people.

Thank you, as well, to the great intelligence professionals who helped make this very successful journey possible.

I want to thank the soldiers, and sailors, airmen, and Marines involved in last tonight’s operation. You are the very best there is anywhere in the world. No matter where you go, there is nobody even close.

I want to thank General Mark Milley and our Joint Chiefs of Staff, and I also want to thank our professionals who work in other agencies of the United States government and were critical to the mission’s unbelievable success.

Last night was a great night for the United States and for the world. A brutal killer, one who has caused so much hardship and death, has violently been eliminated. He will never again harm another innocent man, woman, or child. He died like a dog. He died like a coward. The world is now a much safer place.

What about 2020? Could a moral person pull a lever for Trump with their integrity intact? Would Jesus himself vote for Trump? We’re glad you asked. There’s a brand new book that covers precisely that question: